A Friend to the End 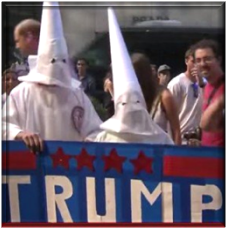 Muhammad Rasheed - [VIDEO] This Election is About Normal vs. Abnormal - Ezra Klein

Chris Suess - I would expect all the KKK is for Trump to go away by now, but I guess everyone hasn't heard the news.  Ku Klux Klan Grand Dragon Will Quigg Endorses Hillary Clinton for President

Muhammad Rasheed - Did you read your article, Chris? When asked why he switched his endorsement for Trump to Clinton, Quigg said it was because he supports her "hidden agenda," and couldn't reveal what that agenda was because it's a secret.

Clinton has yet to address the unexpected new endorsement, but some analysts say Quigg's statements seem "suspect."

"Based on his past statements, it doesn’t appear highly credible that he has changed his effusive allegiance to Donald Trump,” Brian Levin, a former New York police officer who is director of the Centre for the Study of Hate and Extremism at California State University in San Bernardino, told the Telegraph. “The timing seems suspect. I think this is a function of not wanting to undermine the Trump campaign.”

Muhammad Rasheed - This was either Trump's idea (who is probably annoyed at the David Duke thing), or the KKK leader's idea who is trying to "help." Personally it makes your guy look even more like a psychotic clown.

Chris Suess - lol... first he's not my guy. but second are you seriously floating that he is working with Trump by switching his allegiance?

Muhammad Rasheed - Chris, that's what the article that you linked to is saying. lol That's why I asked if you read it .

Muhammad Rasheed - Y'all are being bamboozled: KKK Endorses Hillary Clinton? Not Likely.

Muhammad Rasheed - Your own article said the same thing this said. hahahahaha

Muhammad Rasheed - I quoted FROM your article! :D

Muhammad Rasheed - You played yourself, dude.

Stephen Wilkinson - Chris wrote: "...oh well Snoopes says it, it MUST be true."