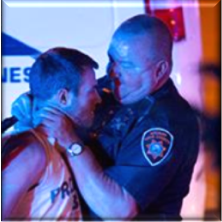 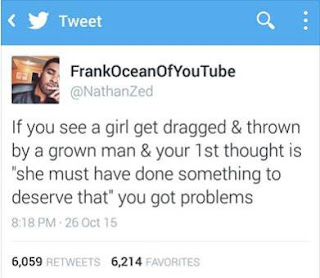 Muhammad Rasheed - I'm unconvinced that they think that way about every girl that gets thrown around, only a certain ethnic group.

Zodicus Zu'ul - to be fair, probably not just one ethnic group.

Hm. Look, I know it's considered poor social media etiquette to compare people to Hitler nowadays, but hear me out. lol

Remember that speech when Hitler pointed out that the European war machine had been doing horrifyingly foul shit to all the nonwhites in the world for centuries? But when he turned the same savagery upon fellow White people during the Holocaust tragedy, it became THE WORST THING EVER!!! "Yeah, we do stuff like that to populaces around the globe all the time, but NOW you've crossed the line, Adolph!! WTF????"

1.) White cop beats up black student
RESPONSE: "She must've done something to deserve it" *yawn*

3.) Black FB Poster: "Hey, how come you didn't respond that way when the cop beat up that black student?"

White FB Poster: "Oh, here comes one of you people playing the race card! It wasn't about race, nig--! BUDDY!!!"

Rick Drew - *That* cop has issues. Just look at the rage in his fat face.

Muhammad Rasheed - They both have issues, Rick. The 'rage' you see is the effort needed to subdue this beefy dude. Beating up that little girl... "brat" as you called her... didn't take that much force. 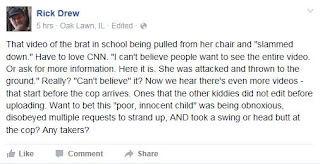 Rick Drew - As I said - the entire story is not out with her. Other kids in the class are already standing up for the cop.

Zodicus Zu'ul - are these the same kids who nicknamed the prick Officer Slam?

Muhammad Rasheed - How come this guy isn't a brat? The article said he actively resisted arrest-- even grabbed the cop's leg -- and yet you directed your disapproval towards the cop. With her, you called her names while you "wait for the whole story" that still won't warrant that guy beating her up.

Rick Drew - Choking someone already subdued - or at all - is 100% wrong. She was given multiple chances. Asked numerous times to comply. She refused. Then she assaulted a cop. So what's her punishment? Should the cop be fired? Time will tell. But she should be charged and expelled.

Andre Roberts - Your FIRST instinct was to call out the cop for choking the white guy as "rage filled". You didn't need more facts, or more to the story. But the black girl? She deserved it, but wait for more facts?

Thought Power Douglas - "The brat"??? Ur subtle. Really subtle, but I read between the lines. Man handling a child is okay??? Do u know the message that sends to our youth??? But u don't really care. Their "brats", right???

Dave Stephens - Decades ago I attended a wonderful school in the middle of nowhere in Eastern Oregon, so I don't know how things were in the city schools then, but I guarantee you that if a teacher encountered a student that would not stop talking on her cell phone and would not leave the classroom, every thing in that video would've happened and nobody in the classroom would consider the slightly violent outcome unexpected… of course, in the late 70s and early 80s, the teacher would have simply asked the two strongest boys to grab her arms and legs and drag her to the principals office to be expelled or suspended...

Andre Roberts - No matter how much of a bitch she was being, the cop handled this completely wrong. He completely went overboard.

Dave Stephens - Clearly. But if I say to the teacher, the principal and their security guy, "Make me." Well. They will...

Andre Roberts - If a video surfaced of you doing what he did to your kid, you'd be arrested for child abuse with the swiftness. So explain to me why it's okay that he can do it? I'll wait.

Alonzo McDowell - This is the problem, why the duck do schools allow they in the first place. My son's school allows cell phones as long as they do not use they in class. What the fuck...these are teenagers, they are going to disobey the rules. But you have some who race bait by acting as if it is not possible that a grown ads man could have handed the situation differently. Why the duck didn't the school call the parents, that is a problem. I bet most white people could not imagine their child doing this, yet I see white children acting out in malls all the time. They cuss and destroy things because they can't get their way. Parents disciplining they children has been demonized, so the school experience rebellious teenagers. I blame the school and the officer...what if the desk had hit another student, or he had thrown the student into the wall paralyzing her over a cellphone. Get the fuck out of here too all you spineless people who refuse to look beyond race and see that this cop was out of control. Brat...your ignorant.

Jeremy Travis - Muhammad, chill. What you're not understanding is that Black resistance and defiance trumps any- and everything that a white person can do. Dylan Roof MURDERED NINE PEOPLE IN THEIR CHURCH... and calmly and gently escorted about, even had food purchased for him. But because a Black GIRL didn't leave a classroom, Officer Tackleberry is within his duties to sling and throw her about like a heavy bag of trash.

Just know that no child services agency would allow a parent to do that to their own child. A man wouldn't even be allowed to do that to his own wife. But the untameable nigger beast, even as a youngling, is too wild and dangerous to have mercy and discretion exercised in its care.

I mean, what we're essentially being told is that, 60 years ago, someone should have slammed down and thrown around Rosa 'the Resistor' Parks.

Andre Roberts - Wait, so this guy Rick thinks if you don't listen to a cop, they can beat you? Is he serious???? Lmao. So what if the 1 or 2 kids like the cop, that doesn't mean what he did was okay. He didn't see a fellow human being (just like Rick) he's saw an animal that needed to be tamed.

Andre Roberts - Notice the white folks in this thread 100% agree with her manhandling.

Zodicus Zu'ul - Andre, not all of us. if that had been my kid, there would be a cop waking up underground in a box right about now.

Andre Roberts - You give me hope. The rest of your brothers? Not so much.

Andre Roberts - The reason they feel that way is because they see another irritating loudmouth black. She deserved it. Forget the fact that you don't do that to children.

Zodicus Zu'ul - yeah. i never have been able to understand how people can look at someone who looks just a little different on the surface, and treat them like they are less than human.

Andre Roberts - And that's it right there. They don't see black people as human so it's okay to brutalize us. It's okay to assume we did something wrong. It's okay because we don't feel pain.

Zodicus Zu'ul - yeah, of all the things white folks have done over the years, the greatest contribution of my bunch to the Greater Civilization is pure xenophobia. "It's different? KILL IT WITH FIRE BEFORE IT MAKES MORE!!!!!"

Zodicus Zu'ul - oh, and i've read somewhere they arrested the little girl who was filming it all in the first place.

Alonzo McDowell - White people have been socially conditioned to fight against their own interest. Many believe that it is the other group's problem until it happens to them. The privilege of not systematic enduring the pain, physiological terrorism that white supremacy places upon minority groups makes them feel immune. They are taught and conditioned to feel that everyone else is the problem. Hitler did not just want to dominate the world, he want to dominate every physical aspects of humanity. This included control the German people, to make a super race with the help on ignorant Germans. He didn't care for the German people he needed the first his ultimate place and then they too were to become slaves to his ideals. Corporate, politicians and institutional government, etc are system the eventual eat it's own to survive, its a living organisms of corrupt people feeding off those who commit themselves to there cause. Eventually those would condone the evil and turn a blind eye because victims. Greed, power and control doesn't care about no one. These laws and systems that now are being used against minorities, will turn and be used against white people. Its like if you never had cancer, how could you relate. The conquer will one day become the conquered.

Zodicus Zu'ul - most of those people today vote Republican.
Posted by M. Rasheed at 10:00 AM