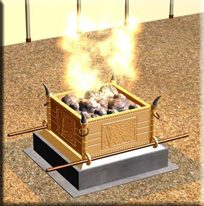 Corey DeSh Brown - During Islam's Ramadan (emphasis in RAM), there is a sacrifice called the Kurban, when they sacrifice lambs, once per year to please God. In the Hebrew, it's "QRB", which literally means, "to offer the close relative". This is why Abraham took his son to sacrifice him. God didn't want that, and offered a Ram instead. Thus, we "elevated" from human to animal sacrifices. The Jews burned the animals, while converts to Islam began feeding the sacrificed lambs to the poor. However, Jesus the Christ elevated mankind by teaching the Living Sacrifice, which is to "Love your neighbor as yourself".

Muhammad Rasheed - Corey DeSh Brown wrote: "This is why Abraham took his son to sacrifice him."

Islam came way after the sacrifice incident between Abraham and his son, so I don't see how the naming of the Islamic ritual would have a bearing on the 3,000 year older event.

Corey DeSh Brown wrote: "God didn't want that, and offered a Ram instead."

He didn't want Abraham to kill the boy, but he did want the prophet to demonstrate that level of obedience to his Maker. Once he proved that he absolutely was willing to go through with it, he passed. He didn't have to actually do it.

How do you figure since he didn't go through with it anyway? At no time did God actually require human sacrifices from His servants.

It's possible that the "burnt flesh" was simply cooked, since in the texts it mentions the "sweet smell" that came from it. That hardly sounds like what WE mean when we say "burnt." Cooked meat is perfectly fine for the poor to consume.

When did the Christ ever teach such a thing?

Corey DeSh Brown - Brother... The Kurban during Rammadan is based on Abraham... This is what Muslims from Iraq and Eastern Europe told me and we studied together and I saw the connection with the Jews, being that I studied Hebrew for 25 years... I don't just read in English. God never required a sacrifice of man nor beast, btw.... that's FEAR... as I mentioned before. All Christ taught was LOVE. Love is perfect and covers a multitude of sins. Nothing needs to die in order for it to manifest. Thus, it is the living sacrifice.

Muhammad Rasheed - Corey DeSh Brown wrote: "Brother... The Kurban during Rammadan is based on Abraham..."

I recognize that. In your status you said that the Abraham event was based on the Islamic naming. It sounds like it was just a typo though so it's cool.

Corey DeSh Brown wrote: "God never required a sacrifice of man nor beast, btw.... that's FEAR... as I mentioned before."

He clearly required sacrifices of beasts as He had the children of Israel and the believers of old do it, as well as the Muslims during the Hajj. At no time did the Christ say that ritual was lifted. If I have to do it "at least once in my lifetime," then ALL Abrahamic religion believers must do it.

No one warned of the punishment of hellfire more often than the Christ Jesus. He taught everything that the other prophet-messengers were required to teach. 'Love' was but one component.

Corey DeSh Brown wrote: "Love is perfect and covers a multitude of sins. Nothing needs to die in order for it to manifest."

Then why does the One God still require it of us and Jesus never told us to stop doing it?

Corey DeSh Brown wrote: "Thus, it is the living sacrifice."

Corey DeSh Brown - David said, "You do not delight in sacrifice, or I would bring it; you do not take pleasure in burnt offerings."
- Psalms 51:16

Isaiah prophesied, “The multitude of your sacrifices—what are they to me?” says the Lord.  “I have more than enough of burnt offerings, of rams and the fat of fattened animals; I have no pleasure in the blood of bulls and lambs and goats.

12When you come to appear before me, who has asked this of you, this trampling of my courts?

13Stop bringing meaningless offerings!  Your incense is detestable to me.  New Moons, Sabbaths and convocations—I cannot bear your worthless assemblies.

14Your New Moon feasts and your appointed festivals I hate with all my being.  They have become a burden to me; I am weary of bearing them.

15When you spread out your hands in prayer, I hide my eyes from you; even when you offer many prayers, I am not listening.  Your hands are full of blood!

16Wash and make yourselves clean.  Take your evil deeds out of my sight; stop doing wrong.

17Learn to do right; seek justice.  Defend the oppressed.a Take up the cause of the fatherless; plead the case of the widow.

For I spake not unto your fathers, nor commanded them in the day that I brought them out of the land of Egypt, concerning burnt offerings or sacrifices
- Jeremiah 7:22

Til this very day, there are still people sacrificing animals and humans in some strange belief that this act of evil will blot out their sins... that somehow God had approved of this. So... I decided to share some scripture on the matter.

Muhammad Rasheed - The scripture you posted represents God wanting the intention of your heart to be for obedience, and the ritual to be the symbol of that obedience from a sincere place. He isn't interested in the empty ritual devoid of sincerity of your belief in Him. First, TRULY believe in Him and THEN will He accept the sacrifice.

17 The sacrifices of God are a broken spirit: a broken and a contrite heart, O God, thou wilt not despise.
18 Do good in thy good pleasure unto Zion: build thou the walls of Jerusalem.
19 Then shalt thou be pleased with the sacrifices of righteousness, with burnt offering and whole burnt offering: then shall they offer bullocks upon thine altar.

Muhammad Rasheed - There's a lot of folk who like to share scripture but are empty of insight into what they call themselves sharing. Try not to be like that. Work harder and dig deeper for proper context. It'll be better for you.

Corey DeSh Brown - So... you really think burning animals turns away wrath? If so, #Salute and I shall be on my way. Be easy, bro.

Obeying your Lord with sincerity turns away His wrath. The rituals are symbolic of that obedience. He's not interested in empty ritual without the sincere effort behind it.

Corey DeSh Brown - Aye... I'm back.
I was working and skimmed through. Now, before I cut the grass, Lol...

"This is why Abraham took his son to sacrifice him."

I typed that based on the meaning of the name, which was around during the Brahms (good religious people who became corrupt).... thus, A-BRAHM (Abram or Abraham).

You said, "At no time did God actually require human sacrifices from His servants."

I never implied that. Again... I was illustrating the evolution of mankind.... and the Jews did burn the animals.

It's not clear at all that God required the sacrifice of beasts.... This is a point I am not willing to drive home with you, just yet. A foundation must be laid, first. In your response to the scripture from Psalms, that was David speaking... and trying to find a way for God to delight in his burnt offerings... it was a start...

You said, "There's a lot of folk who like to share scripture but are empty of insight into what they call themselves sharing. Try not to be like that. Work harder and dig deeper for proper context. It'll be better for you."

You have good intent, but you have no idea. I post with purpose, to lead the reader where I want him to go. Nothing is by ignorance or chance. As time goes by, things will unfold.

I will leave you with this.... Man and God are ONE. I turn away the wrath of God by how I treat mankind.... Nothing more.

Muhammad Rasheed - Corey DeSh Brown wrote:"It's not clear at all that God required the sacrifice of beasts..."

Did he the prophets not have the Levites sacrifices hundreds and hundreds of animals? Then God absolutely required it.

Corey DeSh Brown wrote: "In your response to the scripture from Psalms, that was David speaking... and trying to find a way for God to delight in his burnt offerings..."

That was David, in sincere and grieving repentance for some wrong, explaining under what conditions God would be pleased with the sacrifice ritual from him.

You should try harder.

Corey DeSh Brown wrote: "Man and God are ONE."

Remember the part where you said that nothing is by ignorance? That would be one. God is ONE... separate from His creation. Man is dual.

I turn away the wrath of God with my submission to Him, and obedience to His commands. How I treat mankind is only a side effect of that.

Corey DeSh Brown - You're wrong about that... but I'm not here to argue. Peace

Muhammad Rasheed - It doesn't have to be an "argument" in that sense of the term, but you should at least attempt to provide a logical composition to support your pet concept.

If you aren't trying to persuade people that what you claim is the truth, then why ARE you here, Corey?

Muhammad Rasheed - argument - a discussion in which reasons are put forward in support of and against a proposition, proposal, or case; debate

Argument, controversy, dispute imply the expression of opinions for and against some idea. An argument usually arises from a disagreement between two persons, each of whom advances facts supporting his or her own point of view.
Posted by M. Rasheed at 10:09 PM