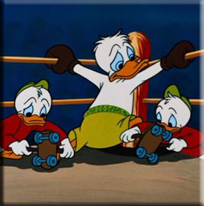 Jay Mac – [shared link] Classic boxing.  What Floyd ain't gone do; like mix it up.  Get ready for the great chicken chase on Cinco De Mayo... 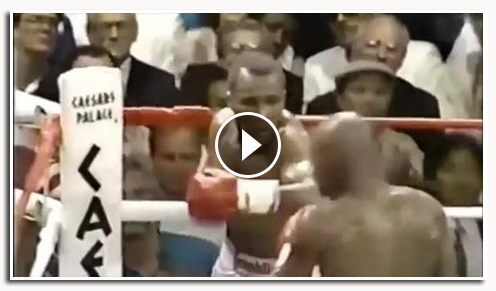 LaVerne Mack - Sugar was my all time fav back in the day!!!!

Muhammad Rasheed - One of my Filipino staff members is quietly anti-black. Never anything crazy, he just believes everything he sees on tv and genuinely doesn't care for blacks because of it. Sometimes he can really get on my nerves to the point where I no longer encourage long discussions with him on pop culture stuff, because I don't want to end up subconsciously unfair to him when it's time for his Annual Appraisal. lol

But I want Mayweather to beat the shit out of Pacquiao SO BAD because of this damn kid. omG...! A s soon as he does, I'm going to pull my chair up to his desk and study his every facial tick, like the Six-Fingered Man. "Tell me: How do you FEEL. And be honest."

I think Floyd picked a good time to fight him. Because I think if they had scheduled the fight prior to Pacquiao getting knocked out, I think he would have taken Floyd. But I don't see Floyd losing to him now.

Muhammad Rasheed - No. With Pacquiao's style, Floyd would've treated him no different than he did Hatton.

I think he deliberately let the hype build over this fight so he could create this "fight of the century" talk. Floyd has proven to be an EXCELLENT marketer. I expect him to -- as usual -- make Manny fight Floyd's fight, and completely neutralize all of his weapons. And in HIS home town.

LaVerne Mack - Ok. But I think Floyd was vulnerable a couple years ago. To the point were I truly believe Manny had him shook! The build up would have been bigger a few years ago. I'm glad it's happening tho! Fight party already planned.

Muhammad Rasheed - By its nature, the build up is stronger over time. The more time you have for people to talk about it, the bigger the hype. I think in the very beginning Floyd was extremely suspicious of this tiny little dude moving up in weight but retaining his knock-out power, but other than the juicing concerns, Manny wasn't really on his radar. And then the fans started talking all that trash. He never fed into it at all, but just let it ride, watching the hype build.

And then, with 2 fights left on his Showtime contract... a contract that states he can make OVER his guaranteed $200 million for 6 fights according to QUALITY OF OPPONENT... he said he wanted to fight Pacquiao next.

This never stopped being the Mayweather Show. Trust me.

Muhammad Rasheed - lol I'm not taking it out on him. I want Manny to go down because it's time.

Jay Mac - Dude, Floyd been ducking Manny for a reason.

Let's just let them settle it in the ring.

LaVerne Mack - If by some chance Floyd goes down Muhammad Rasheed, don't mind me if I trash talk just a wee bit. I've always like to see Floyd fight but his out of the ring antics are just too much. I always said he needs a good butt whooping to get it together. Manny was my go to guy for the job!!

Muhammad Rasheed - Fortunately for you, after Manny is beaten to humiliation (twice), I'm going to exhaust myself clowning all of my Filipino staff to have any left for you.

LaVerne Mack - LMAO! We shall see!

Muhammad Rasheed – Jay Mac wrote: “What Floyd ain't gone do; like mix it up.”

1.) It's been a while since Floyd was able to stay on the outside and potshot the whole fight. Since he's gotten older and slowed down some, he likes to fight on the inside a lot and impose his strength and weight upon the opponent. All of your jokes are circa 2002. lol

2.) I prefer a well-rounded technical fighter. Someone with equally great defense and offense. Boxing is a fully functional close combat discipline, enabling you to inflict a damaging offense upon your opponent while taking very little damage in return. That aspect of it is why I'm a fan of the sport. I have very little respect for fighters who let go of their defensive skills to entertain the less knowledgeable lay-fan.

Jay Mac - Man that style of boxing is a straight up snooze fest for me. I can't stand it.

Muhammad Rasheed - It seems like those kinds of fans will enjoy the Toughman Competition more since it isn't as technical.

Muhammad Rasheed - ...or put those big Hulk gloves on some toddlers and let 'em go at it.

Muhammad Rasheed - The Sweet Science is for scientists.

Muhammad Rasheed - See, the fact that you refer to defense as "running" means you need to watch some toddlers windmilling instead. lol

Muhammad Rasheed - That'll pep you up.

Muhammad Rasheed - I love MMA, but I hate that their stand up game is so damn SLOPPY! Learn to box, f*ckers!!!

Defense is good, but offense is even better.

Muhammad Rasheed - And BOTH are perfection.

Muhammad Rasheed - Now watch Floyd beat the breaks off your boy without taking a blow in return.

Jay Mac - That's why the 2000 Baltimore Ravens were a total snooze fest. All defense, and no offense....

Muhammad Rasheed - FOOTBALL AIN'T FIGHTIN'! Who cares what they do???

Jay Mac - Pacman really ain't my boy. I just don't respect boxers dodging other boxers. And if they do, there must be a good reason...

Muhammad Rasheed - I'm not going to have that discussion with you, Jay. You already made me promise not to call you names. hahaha

Jay Mac - Offense matters, otherwise the contest is boring, no matter the sport...

Muhammad Rasheed - It's only boring if you don't understand what you are looking at. I was like that too when I was four years old...

Jay Mac - So you can express yourself without name calling?

Muhammad Rasheed - Not when the other dude is pushing my buttons. lol

I understand the art, I just don't like boring.

Do you really believe that (ducking)?

Muhammad Rasheed - In fact, the idea of it is dumb to me.

Muhammad Rasheed - Laila gave an interview where they asked her about this match up, and asked if she thought Floyd was "ducking." She gave her POV as a fight insider and said "No." She said they used to say she was ducking people, too, and it wasn't true.

She said it was all about the negotiations, and what it REALLY came down to was greed.

Muhammad Rasheed - If Floyd was ducking?

Muhammad Rasheed - I can't trust Mike's opinion on that. He has a history of repeating whatever dumb shit the people around him are saying, for one. For two, he is jealous as hell of Floyd right now, and it's eating him up.

Jay Mac - @Muhammad, you won't believe Mike - then perhaps you'll take it straight from the horse's mouth? This dude did not want to fight Pacquiao, out of his own mouth - because he's concerned with his health.

And if he hadn't got shamed into taking this fight now, there would be no deal.

That's literally what I JUST said to LaVerne. Are you even paying attention? He wasn't scared to face him; as a professional sportsman he deserved a level playing field and a fair competition. So he stipulated that in order for Manny to take part in Floyd's event, the Filipino fighter needed to comply to Floyd's rules. In the beginning, Manny refused. Now we can take that one of two ways:

1.) He was juicing and didn't want the full scrutiny of the world on him for it where he would more than likely get punished.

2.) He was very falsely under the impression that both he and Floyd were business equals. They absolutely were not. This was literally Floyd's event. He sits on both sides of the negotiation table as the athlete-talent AND the suit calling the big money shots. Manny probably thought they both were contractors working for the usual suspects, which is the real reason those early negotiations failed as Manny insisted on a 50/50 split. Laila's assessment was correct.

Jay Mac - Has Pacquiao tested positive for PED's or roids?

Who is Floyd that a another top boxer has to comply to his testing demands? When did he become the boxing commissioner?

That's like Tom Brady refusing to play the Ravens because he suspected that Ray Ray was juicing.

All that spells scared to me, doc....

Muhammad Rasheed - Floyd finds himself in the unusual and unprecedented position of fighting his opponent in the ring, and then paying his opponent the agreed upon fees when it is over from Floyd's gate purse.

Muhammad Rasheed - Jay Mac wrote: "Who is Floyd that a another top boxer has to comply to his testing demands?"

That's exactly the opinion that Manny had in the beginning, and why the early negotiations fell through, but he certainly understands it now. Who is Floyd?

Floyd is the Boss. It's HIS event. Literally. Floyd set the date at 2 May, and EVERYBODY scrambled to make it happen because Floyd said so.

Muhammad Rasheed - As soon as Manny finally understood where he really stood in the order of things -- he is a contractor working for Floyd -- then things proceeded.

The only people that keep using the word "ducking," are those that are still confused as to the reality of events unfolding.

You should stop now. You don't know what is actually going on. You're just going to embarrass yourself.

Muhammad Rasheed - What I just laid out is exactly how it is. I'm not going to argue it with you. It doesn't matter if you don't want to believe it or not. These are indeed the facts of the situation. Manny definitely understands now, and it is why the fight went through. He didn't before.

Jay Mac - Manny agreed to all of Floyd's bullcrap to kill all of his excuses not to fight him. Manny just wans to fight the dude to prove to the world once and for all, exactly why Floyd's been ducking him.

See you in May.

That money goes to the Money Team, and Floyd peels off what the Pacquiao camp negotiated in their fees and keeps the bulk of it like any other business. Manny is a contractor working for Floyd.

Muhammad Rasheed - When Manny was falsely under the impression that they were both contractors, he didn't understand why Floyd flat out rejected all "50/50" talk, and interpreted it as "ducking," which is more than likely where that talk was probably coming from originally. It is not the case.

Muhammad Rasheed - I'm going to pull my chair up to my staff member, and to your house: "Tell me how does Pacquiao's spanking makes you FEEL? Be honest, this is for posterity."

Muhammad Rasheed - Jay Mac: "Hey... you have six fingers on your right hand!"