A Solid Stand Up Game 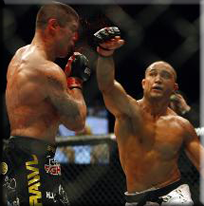 Muhammad Rasheed - For some reason all Laila can see is Rousey's stand up game. She seems blinded to her Judo + Arm Bar of Death primary weapons.

Donnell SeaSick Swinson - Too much like her father. Remember when Ali fought that martial arts guy back in the day? It didn't go well...

Brett Barton - She is just trying to be relevant.

I like Laila but she ducked some potential dangerous fights to retire with a great record.

Jay Mac - It depends on the rules of engagement. Will they box only, or will MMA rules apply.

If it's the former, then Laila gets the nod. But if it's the latter, then Ronda's got the upper hand...

Muhammad Rasheed - Brett Barton wrote: " I like Laila but she ducked some potential dangerous fights..."

She said she put it out there that she wanted to fight these folks, but they immediately started saying SHE was ducking THEM on the rumor mill.

Muhammad Rasheed - Jay Mac wrote: "Will they box only, or will MMA rules apply."

It would be retarded for either of them to agree to a fight in which their opponent had 99% of the advantage.

Muhammad Rasheed - (notice that I didn't say that YOU was retarded. chill)

Jay Mac - No need for the disclaimer sir.

I'm not saying that either of them would agree to one style of fighting. I'm just making an observation as to who's best at what they do.

I think that when Laila is talking about mixing it up with Ronda, that she's speaking of boxing and not rasslin'.

Brett Barton - @donnel
Dude even fought against Ali with a broken leg.

It explains the weird tactics.

That fight is hard to watch even with Judo Gene as the referee.

Muhammad Rasheed - I don't feel like disliking Rousey. "I ain't got no quarrel with that Rousey - no Rousey ever called me Nigger."

Brett Barton - "No MMA person can ever beat me"
-boxers everywhere-

Muhammad Rasheed - When MMA folk actually learn how to really box, there will be no reason to ever watch the sweet science events again. It's just a matter of time.

Brett Barton - I like boxing for what it is.

I can watch them all separate or mixed.

Jay Mac - She's too pretty to be boxing.

What, where'd I hear that before?

Psy Kyomynde Yobutishyne - MRasheed wrote: "When MMA folk actually learn how to really box, there will be no reason to ever watch the sweet science events again. It's just a matter of time."

Boxing works under its limiting rules. MMA fighters will probably never adopt "pure" boxing stances and tactics because kicking and grappling can nullify them. Now, when MMA fighters stop headhunting and learn to use body blows, they will become even more dangerous.

Muhammad Rasheed - I've seen this one fighter... Martin Kampmann... who not only is tall for a welterweight at 6 ft, generally towering over other opponents, but impressively to me he uses solid classic boxing in his fight style. He has good muay thai and jiu jitsu, too, but I loved that when the fight first starts (except for that one-punch destruction he received from Hendricks that time) will intercept his opponent's forward aggression with a rock solid jab and combos. Like a force field. Only if they manage to get past that, that he usually uses to great effect making him one of my personal favs, will the other stuff come into play. He's perfectly content keeping people a the end of that jab. Of course I don't expect ALL MMA guys to eventually fight that way -- even all boxers don't fight in the classical technical style from the outside -- but I do look forward to when they are finally as dangerous standing up on average as the average boxer is.

Brett Barton - Many have boxing talent but it depends on who they are fighting to showcase it. Sometimes it's best not to box with someone.

All decent boxers but didn't always use it depending on who they fight.

Muhammad Rasheed - None of these three can "box." They are confident in their stand up, and use their fists aggressively, but none demonstrate strong boxing skills. Kampmann did.

Wondering Knight - I thought Diaz was a pretty good MMA boxer. I thought Holy Holm would have beat down that chick in her first fight but she barely scraped by even on the feet.

Yeah, "pretty good" in that limited, and kind of wild way MMA fighters "box," sure. But the way the top MMA standup guys interpret boxing is precisely what gave the former pound-for-pound world champion James Toney the confidence he'd be able to just walk up in there and reign for a million years until they had to call hospice on him.

MMA fighters don't box except in very rare instances, like the above mentioned Kampmann. Even Rory MacDonald displayed some ACTUAL solid boxing skills when he beat the shit out of BJ Penn... the prodigy finding it impossible to get past Rory's force field of impenetrable jabs & mini-combos from a clear solid knowledge of Classic Boxing.
Posted by M. Rasheed at 3:04 AM