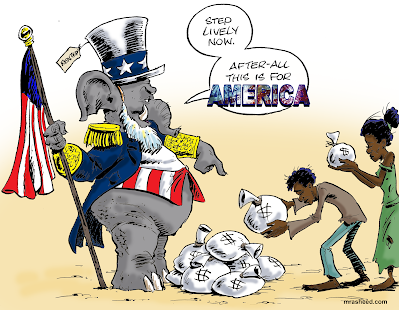 CITATION
Rasheed, Muhammad. "Fake Patriots: Marketing Campaign of the Fiend." Cartoon. The Official Website of Cartoonist M. Rasheed 29 Jun 2017. Pen & ink w/Adobe Photoshop color.
I notice that you like to use a lot of patriotic-sounding labeling for your trademarked products ("The American Enterprise Institute", "Citizens for a Sound Economy", "OPERATION: Enduring Freedom", “An act to restore confidence in government by establishing the voter information verification act to promote the electoral process through education and increased registration of voters and by requiring voters to provide photo identification before voting to protect the right of each registered voter to cast a secure vote with reasonable security measures that confirm voter identity as accurately as possible without restriction, and to further reform the election laws...”, etc.) despite the fact that ALL of your products strip the rights of Americans, subjugates them to an exploited supporting second class, and economically excludes them from full US citizenship and its freedoms. All of your schemes only protect the wealth coffers and power monopoly of your narrow demographic, at the expense of American citizens, while you pretend to be the ultra-patriotic, pro-USA party.

It's genuinely OFFENSIVE watching you strut about in the land pretending you aren't the Monster of Legend, in fact pretending you are the white-hatted Good Guy of history, and pretending you and your international business partners have a monopoly on God's Favor. Meanwhile, in truth, you are that very 'domestic enemy' the US citizen was warned to guard against. You are the adversary's puppet in its war against the people of God. Enjoy this brief respite that the Lord has granted you, and the illusion of your invincibility, but know you that your day is coming, there will be a reckoning, and your Bill of Karma will indeed come due.
Posted by M. Rasheed at 5:55 PM