He Tells You to Stay Down. It's Time to Stand Up. 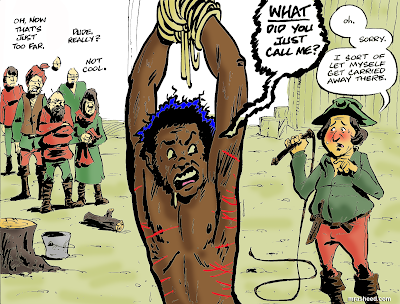 CITATION
Rasheed, Muhammad. "N-Word Outrage." Cartoon. The Official Website of Cartoonist M. Rasheed 23 Jun 2017. Pen & ink w/Adobe Photoshop color.
I notice that you only pull out your Big Guns of Righteous Outrage™ whenever something worthlessly harmless happens, like when some racist jackass says the word "nlgger", or some other ignorant racist twat suggests that you only dominate in sports because you were bred that way in slavery. Oddly you never get that furious in the face of real and blatant racism, but instead cower and whimper... "I'm so tired! Please let's stop sharing these videos. Let's just stop talking about this and rest. It stings my feels so bad." Who isn't aware of "Sticks & stones may break my bones, but words will never hurt me?" How do you get that backwards? It's embarrassing. I'm going to need you to reverse the order of these responses, and stop demonstrating to the whole world that you are soft as cake, and you've gotten into the habit of allowing your dedicated enemy to push you around anytime he wants. Stop it.

I realize that being a soldier isn't for everyone, but you can at least stop being an impotent wet noodle, shuffling around avoiding the enemy's gaze, yes?