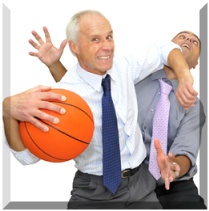 Jordan Smith - Why does the NBA have so little racial diversity? Is it not wrong that one race of people can dominate an entire sport?

Muhammad Rasheed - I agree. There should be WAAAYYY more diversity in the billionaire owners, the coaches, and the financiers. The "Good Ole Boys' Club" is quite tired. It's like that because that specific demographic likes to hoard wealth & power, monopolizing it for their little group alone. They treat competition from other ethnic groups and races like it's an alien disease infestation from outer space.

The lack of diversity among owners is based on economic exclusion practices and discrimination. The low diversity among the players is based on ethnic tradition trends and merit selection. The former is where the actual problems lie – soaked in racism, classism, and corporate greed – but the bad guys are all too willing to allow the passionately uninsightful to falsely believe that it's the low player diversity that needs to be corrected instead. The Federal Trade Commission needs to do a deep-dive investigation into the long-time slimy practices of the pro-sports team elite with the goal of breaking up that cartel, and free up the markets for more diverse business to share that wealth.

By contrast, fake activism that focuses only on the non-issue of player diversity will not solve the root cause of the true problem, but will in fact give the mere shallow illusion that "something is being done" about the nation's core ills. It would be the equivalent of eating cheap fast food: You'd starve to death with a full belly.
Posted by M. Rasheed at 3:45 AM