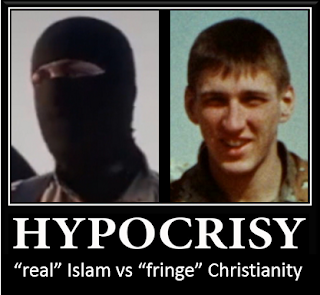 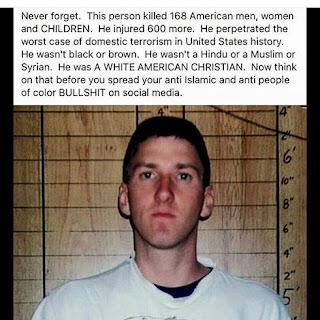 Judy Campbell - one sick fafo! Long may he rot!

David Hoover - Soooooo fucking stupid. Islam, itself preaches hatred and intolerance. McVeigh was fighting a corrupt government, responding to the government murders of The Branch Davidian in Waco. (NOT that I agree with his methods). The DIFFERENCE is that neither Hinduism, Christianity, Taoism, nor many other isms COMMAND their followers to MURDER those who won't convert to Islam. The Koran has between 80-90 passages that do just that. The 80% of Muslims who are NOT violent or terrorists are NOT following the Koran. That is WHY the "radicals", the ones who are ACTUALLY DOING WHAT THE BOOK SAYS, have no problem killing MODERATE Muslims, because they are considered "apostates". YOU SHOULD ACTUALLY READ THE KORAN so you'll KNOW the truth instead of believing the liberal propaganda that EVERYONE on Earth just wants to live in peace and harmony...because they DON'T. Muslims have been attacking the USA since approximately 1785. Try reading some history.

Don F Stout - And yet, the fact still remains that he was a white American Christian, that murdered a 168 other Americans for his beliefs.

Steven Ben-Off Abrams - Read about Timothy McVeigh's beliefs, compare them to the tenets of mainstream Christianity.

Michael J. Salerno - Exactly! Nothing about "Christian Identity" is Christlike at all. Fwiw - "Christlike" is the transliteration of the word "Christian"

Stephen Miles Lewis - There's a lot more to that case ... not least of which is a 3 perp and govt involvement.

Ian Jaydid - I just went ahead and disliked all religions equally.

Steven Ben-Off Abrams - @Melvin... you're my FB friend, but this meme you posted is bullshit and for chrissakes do some research before you identify Timothy McVeigh as a "Christian" - the perpetrators of San Bernadino were in line with an interpretation of Islam (ISIS) that is so mainstream that Islam's most prestigious theological school, Al-Azhar University in Cairo, refuses to condemn them as "un-Islamic" (look it up!) - meanwhile, Tim McVeigh's version of "Christianity" is so fringe-y that it's called "the Christian Identity Movement" - it's an insane, racist sect that NOBODY regards as remotely Christian

Steven Ben-Off Abrams - So please - anybody with a critical mind - look up Tim McVeigh's totally fringe understanding of "Christianity." then compare that with ISIS/San Bernardino shooters understanding of "Islam," then come back and show me whose belief system has more basis in scripture. (hint - it's Islam)

Kenneth Lawrence Schroeder - "The Turner Diaries"... Christian Identity... all part of McVeigh's belief system. He was a 'Christian' the same way an ISIS member is a 'Muslim'

Steven Ben-Off Abrams - Not so. ISIS's interpretation of Islam is much more mainstream in Islam than McVeigh's "Christian Identity" is in Christianity

Steven Ben-Off Abrams - It's misleading to compare a belief based in a lunatic fringe sect of Christianity to a mainstream (but violent) version of Sunni Islam. It doesn't take much study to show how close the beliefs of ISIS/the San Bernardino killers adhere to everyday Islam and how far Tim McVeigh's beliefs stray from conventional Christianity. It's not worth arguing over. Whatever the excuse-makers defending "peaceful" Islam tell you, jihadism is founded in conventional interpretations of Islam. "Christian Identity" is a fringe phenomenon. Look it up

Kenneth Lawrence Schroeder - Well Steven, when I walked through Morocco, Turkey and Egypt, and I was given money, food and lodging by mainstream Muslim, I never got the impression they were remotely like ISIS. On the other hand, most of the conservative Christians I know believe Israel must extend from the Nile to the Euphrates-- and they support Israel in that sense, though they don't like Jews-- and a third temple must be built so that Jesus can come down from the clouds etc etc. Furthermore, I've heard them say, some teenaged girls who have abortions should be executed-- there is a precedence for this in the Old Testament...

Kenneth Lawrence Schroeder - @Steven Ben-Off Abrams... ISIS does not represent a mainstream version of Islam. How many Muslims do you know personally?

Steven Ben-Off Abrams - No argument with you. I'm not saying Muslims can't be good people. I'm saying jihadism comes out of mainstream interpretations of Islam. This isn't an argument you're going to win.

Steven Ben-Off Abrams - I'm happy to hear your defense of Islam. I agree that jihadism is a perverted vision of Islam. But to point to Timothy McVeigh as a "Christian" terrorist" to counter much more apt examples of Islamic terrorism is a poor argument. You only need to examine McVeigh's beliefs, see how far they are from conventional Christianity, and contrast that with jihadis, who basically believe in the same principles that the spokespeople from the Council on Islamic American Relations do, except with a different emphasis. Ask people from CAIR about jihad. They won't renounce jihad. They will give you an innocuous interpretation of jihad. Whether you define jihad as an inner struggle for righteousness, or as making aggressive war against the infidel, it is still a part of mainstream Islam. That is my point.

Steven Ben-Off Abrams - Christian Identity is more like a white version of the Nation of Islam (NOI) creed than it is like Christianity. There's just no comparison

Steven Ben-Off Abrams - @Kenneth Lawrence Schroeder... I visited Morocco in 1988 and people there were very hospitable to me.

Steven Midrano - @Steven Ben-Off Abrams... Suppose you hear in one of the towns the LORD your God is giving you that some worthless rabble among you have led their fellow citizens astray by encouraging them to worship foreign gods. In such cases, you must examine the facts carefully. If you find it is true and can prove that such a detestable act has occurred among you, you must attack that town and completely destroy all its inhabitants, as well as all the livestock. Then you must pile all the plunder in the middle of the street and burn it. Put the entire town to the torch as a burnt offering to the LORD your God. That town must remain a ruin forever; it may never be rebuilt. Keep none of the plunder that has been set apart for destruction. Then the LORD will turn from his fierce anger and be merciful to you. He will have compassion on you and make you a great nation, just as he solemnly promised your ancestors. "The LORD your God will be merciful only if you obey him and keep all the commands I am giving you today, doing what is pleasing to him." (Deuteronomy 13:13-19 NLT)

Steven Midrano - And there is a lot more where that came from.

Murder in the Bible

Steven Ben-Off Abrams - Yipes! That's terrible. The Bible does portray ancient atrocities. But very few people reading the Bible take these portrayals as commands to go forth and do the same in the present time. This really is a contrast to "jihad," which unfortunately, many Muslims interpret as an ongoing struggle against infidels: "there's a major difference between the Bible, which describes the destruction of an enemy at a point in time, and the Quran, which urges an ongoing struggle to defeat unbelievers."

Is The Bible More Violent Than The Quran?

No, it doesn't. It comes from mainstream war mongering as taught by world intelligence agency agents. None of their actions have anything to do with Islam, they just slap Islamic/Arabic terms on the stuff they do. Prejudiced outsiders, determined to vilify an alien religion they have no desire to actually understand, eat that mess up though.

Muhammad Rasheed - Steven Ben-Off Abrams wrote: "But very few people reading the Bible take these portrayals as commands to go forth and do the same in the present time."

There's quite a few Muslims in the world, Steven. The radical terrorist community among them are definitely the minority. We didn't have all of this war mongering unrest in the middle east before WWII, when the British confiscated Palestine and handed it over to the Zionists, who promptly started slaughtering the natives (Jews, Christians & Muslims btw) to make way for their controversial nation-state.

Also, after The Six-Day War, it's pretty clear that the current continuous chaos & strife in the Muslim World is the Zionist nation's new and preferred way of making sure the Arabs don't pool their resources and attack them for wrongs both old & new...

Steven Ben-Off Abrams - I didn't want to get into this sort of discussion, Muhammad. Your points are well-taken. I did not want to argue about the nature of Islam, or the validity of grievances in the Muslim world. My principal point was, having read quite a bit about Tim McVeigh, that his views don't comport with any conventional understanding of Christianity, and that it is a misrepresentation of his beliefs to call him "Christian," although he was raised Roman Catholic. To cite Timothy McVeigh as an example of "Christian terrorism" is misleading.

Muhammad Rasheed - In the Qur'an, the One God of Abraham commands the believers many times to follow the guidance in the Book and the example/way of "this Prophet" it was revealed through.

The Prophet Muhammad, peace be upon him, didn't engage in the same war tactics that ISIS/ISIL does, Steven. The modern Arab war fighter combat methods and mindsets come from a training package that has it's origins in the secular Tamil Tigers, as filtered through the CIA and Mossad who trained their elite. Consequently, it is also misleading -- not to mention hypocritical -- to insist that the actions of ISIS/ISIL adhere to "true Islam." The Muslim World has been conspicuously absent of these atrocities for the majority of its 1500 year history. It didn't look like this before The Six-Day War either for that matter (despite many dumbasses who enjoy linking these conflicts to Ismail/Isaac).

Muhammad Rasheed - Steven Ben-Off Abrams wrote: "I did not want to argue about the nature of Islam, or the validity of grievances in the Muslim world."

If you have a pet rant on these two items, I'm open to hearing them and challenging you to defend the positions. When you get time let's do it. I'm pumped. 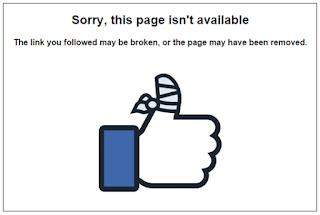