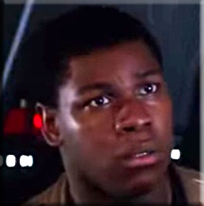 Muhammad Rasheed - What ‘Star Wars’ gets wrong about blacks and women

Muhammad Rasheed - "In 1980, when the handsome, deep-voiced Billy Dee Williams appeared on-screen as Lando Calrissian, he exuded sex appeal — though don’t get it twisted, there was no actual love interest available for him to attach to all that swagger. But at least he brought it to the party. Later, when he turned out to be a general in the Rebel Alliance, that seemed like a solid redirection of his powers. In subsequent movies, Mace Windu, played by Samuel L. Jackson, was a Jedi master, but was not a lead, and was one-note, hardcore." ~Lonnae O'Neal

I wasn't expecting anything different from Bogle's insights with how they portrayed the Finn character, because Hollywood is Hollywood after-all; one-trick pony is their thing. But the part that actually offends me -- considering the levels of super-hype -- were what Brandon Easton pointed out regarding the usage of A New Hope as a story-plot template.

I hate that risk averse bs. I thought Brandon was being VERY generous with his 7/10 rating, because that lazy version of "writing" would never get that high a rating from ME. Is that the quality of screenplay work they pay Hollywood blockbuster writers? smh

They could have addressed the issues people had with the Prequels without repackaging A New Hope, and took the franchise to a new level of awesome. Repackaging what we already know (have memorized, actually) is not how you do that. Personally, I would have preferred making Jar Jar the dark Sith master that that one blogger theorized.

Ba Sheer A. Musawwir - I was thinking all the money they spent on pre-release toys, and amped up trailers, that, that money should have been spent on better screen writers and reshoots

Muhammad Rasheed - Considering they hired Lawrence Kasdan, one of the co-writers of the nigh universally loved Empire Strikes Back, I'm not sure "better" was necessarily the issue. The story was deliberately guided [held back] in a certain direction.