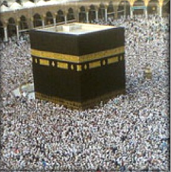 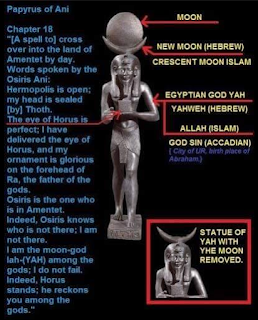 Paganism is the taint that infected the species afterwards.

Muhammad Rasheed - Are you aware that in verse 23 of the same chapter, God condemns these same three "deities" as mere names that the pagans and their fathers invented?

The monotheism of Islam is the continuation of the original monotheism that the very first human knew. All paganism is after the fact inventions by weak minds.

Muhammad Rasheed - Muhammad, peace be upon him, was the last in a long line of prophet-messengers that preached the monotheism of the Supreme Creator since the creation of Adam the patriarch. The message of God preached by all the Hebrew prophets, and the Arab prophet, were one message: Believe in God, reject evil, do good, repent when you fall.

Muhammad Rasheed - It says it throughout the entire Qur'an... that they were all of one brotherhood, who preached the same message, were anointed to the same mission. That's why the believers are commanded to treat them all the same, and hold none of them up higher than any other.

Muhammad Rasheed - Ka'aba was cleansed of pagan foolishness when the believers returned triumphant to Mecca to put the pagans in their proper place in the anointed holy city. Since then it's been rebuilt several times. There are no longer any pagan images within the House of Allah. Glory be to He!

Charlotte Mouaga - that doesnt matter the origins are still pagan

Muhammad Rasheed - The origins of the Ka'aba are that it was built by Abraham and his oldest son Ishmael (some legends say it was built by Adam, but I don't give that any weight other than as a curio). The Arabs hadn't had a prophet-messenger to instruct them in scripture & wisdom since Ishmael, so over the thousands of years, the holy shrine became coated and filled with pagan nonsense. The final messenger of the One God, the 'comforter' and unlettered prophet himself ordered the holy house cleansed and re-dedicated back to the Lord of all the worlds... a state it has remained in for these 1,500 years since.

Muhammad Rasheed - No one worships the Ka'aba, Charlotte. God commands the believer to demonstrate our unity by facing in the direction of His House when we pray to Him. That's all. No one asks the Ka'aba to bestow blessings upon them. lol

Muhammad Rasheed - It is the One God of Abraham alone that we worship, His aid that we seek.

Muhammad Rasheed - What does it mean to "worship" something, Charlotte?

Charlotte Mouaga - and no one is certain (well, apart from what muslims say) about the origins of the Kaba so you are lying. Only mohammed made that claim

Charlotte Mouaga - and why would Mohammed order his followers to face Jerusalem if the Kaba was the house of God??????

Muhammad Rasheed - That Abraham & Ishmael built it was a known concept even before Al-Islam came; long have the Arabs traced their linage back to the son of Abraham. This was common knowledge. Can this be definitively, scientifically proven without a shadow of a doubt? Probably not. But in absence of any reasonable alternate theory (pagan origins are not reasonable btw), this will do.

Calling me a liar for believing it and sharing it is over-the-top.

Muhammad Rasheed - The prophet didn't order the believers to face Jerusalem, God did it. In the Qur'an the reason He gave was to test them. Some of them did make a fuss about it, and God let them know -- firmly -- that it was not a righteous deed to face in one direction or another during prayer (He then listed the righteous deeds that WOULD count towards their purity for paradise), and said that if they continued to fuss about it then they only prove to love trivial traditionalism and foolishness more than Him.

Charlotte Mouaga - facing another direction- what a challenge gasp emoticon No, he hoped that Jews would receive him

Muhammad Rasheed - It was a challenge. The Jews weren't exactly their friends at the time, and they had their own traditional direction to face, which their prophet confirmed belonged to the One God.

Muhammad Rasheed - The command hurt them in their feels. lol

Charlotte Mouaga - if you say so..

Muhammad Rasheed - It's told in the Qur'an itself:

The Holy Qur'an Surah 2: 142-144
142 The fools among the people will say: "What hath turned them from the Qibla to which they were used?" Say: To Allah belong both east and West: He guideth whom He will to a Way that is straight.
143 Thus, have We made of you an Ummat justly balanced, that ye might be witnesses over the nations, and the Messenger a witness over yourselves; and We appointed the Qibla to which thou wast used, only to test those who followed the Messenger from those who would turn on their heels (From the Faith). Indeed it was (A change) momentous, except to those guided by Allah. And never would Allah Make your faith of no effect. For Allah is to all people Most surely full of kindness, Most Merciful.
144 We see the turning of thy face (for guidance to the heavens: now Shall We turn thee to a Qibla that shall please thee. Turn then Thy face in the direction of the sacred Mosque: Wherever ye are, turn your faces in that direction. The people of the Book know well that that is the truth from their Lord. Nor is Allah unmindful of what they do.

The context isn't difficult to correlate if you know the prophet Muhammad's biography.

Muhammad Rasheed - It's too early for hostility, Charlotte.

Charlotte Mouaga - its 11:23 pm where I am and there is no hostility. Why do you assume that?

Muhammad Rasheed - Uhhh... because you called me a liar, and all of your responses are curt.  It's 7:33am over here.

Muhammad Rasheed - Hostility is NOT 'cool,' Charlotte. It's mean! lol

Muhammad Rasheed - It was God who said that as long as the Sabians believed in Him, rejected evil, and did good, they would indeed receive their reward on the Day of Judgment. It is He that knows, and we that know not.

Muhammad Rasheed - devotion - love, loyalty, or enthusiasm for a person activity or cause

worship - to show reverence and adoration, esp. for a deity

Muhammad Rasheed - So if you love your husband, show loyalty to him, or express enthusiasm for seeing him, are you worshiping him as an idol?  Those terms are not synonymous.

Charlotte Mouaga - I only worship God.

Muhammad Rasheed - The same for me. Obeying Him and facing the direction He commanded I face while worshiping Him doesn't change that.

Honestly, you should just ask.

Charlotte Mouaga - lol... I dont see how that can make a person more holy. Thats just a pattern of behaviour that you conform to. It does not transform your heart

Muhammad Rasheed - Committing to obeying the Lord Most High makes you holy by default.

Charlotte Mouaga - How can it? You still fall short

Muhammad Rasheed - What do you mean? 'Holy' is consecrated or dedicated to God. If I make a conscious choice to commit to Him and His commands, it makes me holy. If I fall short, then I do what He said to do when I fall short, and regain my holy status once more.

Charlotte Mouaga - lol....what if you die and dont get the chance to do that?