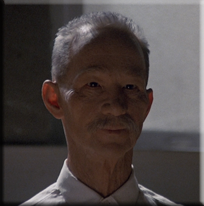 Rick Smallwood - Watching Shaolin Soccer and heard this blasphemy "Shaolin is the source of all martial arts."

Bar Barian - As Chiun might say, "The english translation for Shaolin is huxter. Trust them not."

Leo Aromaa - I once was in gym's treadmill when Shaolin Soccer came from tv on the opposite wall monitors. Big mistake, I almost did myself serious injury by laughing at the final football match.

Is Stephen Chow Korean? Then I'm pretty sure Chiun would pimp slap you both in the mouth.

John Grace - Chow is Chinese, but were Joel Grey and Roddy McDowell Korean? Perhaps Chiun cursed the movie to bomb and the pilot to unsold status. I have a hunch that Dr. Ken Jeong will be cast as Chiun with a ton of "movement doubling" by stuntmen.

Joel Yohn - I'd like to think that Chiun could recognize the talents of Chow. Even if he is a lowly Chinese. He was able to appreciate the acting skills of Rad Rex even though he was just a white.

Muhammad Rasheed - Joel Yohn wrote: "I'd like to think that Chiun could recognize the talents of Chow. Even if he is a lowly Chinese."

If he was attempting to portray HIM??? No. lol

Joel Yohn wrote: "He was able to appreciate the acting skills of Rad Rex even though he was just a white."

Was Rad Rex at any point during that show attempting to imitate a Korean from the village of Sinanju though?

Muhammad Rasheed - Sure, Chiun could appreciate their talents, as long as they stayed in their proper lanes.

Joel Yohn - Whoa... Muhammad. I thought we were just having fun in a world where we have to worry about what Chiun would really think. Of course it would be awesome if a Korean actor could portray Chiun. But... If there is no worthy Korean actors, they may have to look elsewhere. Just like Chiun did when he needed to find a new student.

Muhammad Rasheed - Joel Yohn wrote: "Whoa... Muhammad. I thought we were just having fun in a world where we have to worry about what Chiun would really think."

We 100% are. I was just amused by the side note. Not trying to take this anywhere else. But Chiun really is racist as heck. It's part of his over-the-top appeal, because both black and white Americans can watch his antics with a level of objectivity.

Joel Yohn wrote: "Of course it would be awesome if a Korean actor could portray Chiun."

It would be ridiculous for them not to make that happen. Crazy really.

Joel Yohn wrote: "But... If there is no worthy Korean actors..."

Why wouldn't there be? Someone who can act, someone young, handsome with gymnastics/flexibility training (not necessarily martial arts), and can speak English. There HAS to be someone like that.

Joel Yohn wrote: "...they may have to look elsewhere."

If they do it means they were lazy.

Joel Yohn wrote: "Just like Chiun did when he needed to find a new student."

I'm pretty sure Chiun didn't test every kid in Korea for that position, Joel. lol

Joel Yohn - In all honesty, I just really love Stephen Chow and think he would be great.

Muhammad Rasheed - Then I agree he can have a role in the story, sure. Just not THAT role. He can play "Sagwa."

Muhammad Rasheed - OMG I wish SOOO much I had creative control in the casting on this. As a big fan myself, I honestly don't want them to mess this up.

Muhammad Rasheed - We live in an era where Hollywood has proven it can put together a product that doesn't alienate the True Fans of the intellectual properties they adapt. If the Harry Potter, Twilight, and Marvel Comics fans can be happy when they come out of the theatre, then why can't we Destroyer fans?

You see what I'm saying? NO EXCUSES! We don't HAVE to settle.

Muhammad Rasheed - If Hollywood can actually convincingly have The Avengers battle Loki, the Guardians of the Galaxy battle Ronan the Accuser, then the significantly simpler Destroyer Universe should be a freakin' walk-in-the-park.

Muhammad Rasheed - I'm personally busting my ass to make sure you fellow True Fans are happy with my Destroyer stories, and I don't have a damn multi-million dollar Sony Films budget. I really don't want to see any bullshit on that silver screen.

Muhammad Rasheed - They don't have any excuses not to do it correctly.

Muhammad Rasheed - I swear if it turns out like Shyamalan's Air Bender, I will set Hollywood on fire.

Muhammad Rasheed - Me: "Hello, ISIS? Put Mohamed on the phone, please. Hey, how soon can y'all get to California? Sweet. Oh, and Mohamed...?

Bar Barian - Yes they have a history of taking a good thing and dressing it in drag while they bend it over.

They can start there.

Muhammad Rasheed - One of them's name is actually "Song" for Christ's sake! How perfect would THAT be???  lol


Victor Donald Smith - When you try to do so yourself, you find out how much work it is.

Muhammad Rasheed - It IS work, no doubt. That's why they get the big bucks for doing it. And record-breaking amounts of the big bucks for not pissing off the True Fans that made the property successful in the first place.


John Grace - I'd love to see a previously unknown Korean-American actor play Chiun and get a big break with this film. Hollywood used to be good at developing new stars, but they've faltered at it in recent decades. As long as we get something better than Remo dropping wood on jeeps, I should dig it.

Muhammad Rasheed - That would be the best case scenario to me. An unknown young actor in the Chiun makeup, who also plays the younger Nuihc. In the marketing/promos they can have him walk around in the makeup, pretending to be the real Master of Sinanju, who insisted he play himself to prevent the 'Caucasian in Korean makeup' fiasco from the '80s (where they casually hint that it was indeed his deadly skills responsible for the previous film's flop).

Muhammad Rasheed - That would be awesome.

Muhammad Rasheed - You can only pull something like that off most effectively with an unknown.


John Grace - It's a big town of actors, so it would be nice to see some fresh faces in the roles. Hollywood is so bad at making new stars that people are still paying to see Social Security-aged, HGH-pumped Stallone and Schwarzeneggar in big budget movies.

Muhammad Rasheed - They're not actually bad at it, they are just risk adverse and prefer not to.

John Grace - That's the problem. I miss the idea of taking a chance on an unknown, like they did with SUPERMAN THE MOVIE, DR. NO, THOR, nearly every Tarzan movie and even CASINO ROYALE. When rumors of a new movie would surface since the Orion film flopped, I feared the worst: "Michael J. Fox is Remo."
Posted by M. Rasheed at 2:44 PM