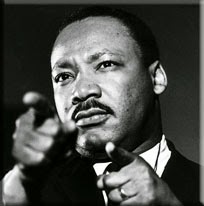 Kimberly Moseberry - [posted image] I did this message on how I felt about MLK. In the media they always portray him as a old man almost. But He was young when he died. The never talked about this... speech he did. On how blacks needed to own their own businesses and build their own economy.

By the time he did say wake up and began speaking on it. He was murdered.

I call this piece waking up from the dream into broken promises. 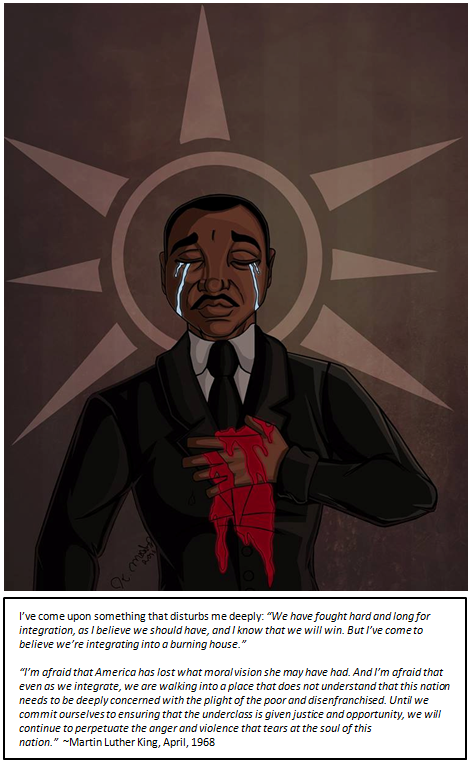 Muhammad Rasheed - Kimberly Moseberry wrote: “[They] never talked about this speech he did. On how blacks needed to own their own businesses and build their own economy.”

This was around the time period when the focus of the civil rights movement mysteriously shifted from the pursuit of “de-segregation” (which came with a list of objectives that needed to be conquered in order for the Black American community to get up to speed with joining the mainstream society without being held back by discriminatory laws), to a destructive “integration” goal, which came with a list of nothing that would strengthen the community, and in fact resulted in the middle class abandoning the black communities, plunging them into heartbreaking blight and desolation. This served only to widen the gap between the Black middle class and the lower classes, leaving the poor easy prey for other groups to take advantage of. Now they feel more helpless than they did during the height of jim crow, when at least all the socio-economic classes had little choice but to uplift each other in the face of a far more blunt demonstration of racism; an uplifting that mimicked the struggles of every other people who grew from poor struggling immigrant to successful ethnic group. This odd “integration” has functioned like a curse on the Black American, and it is impossible for me to believe it wasn't a calculated tactic slipped in from a greedy and predatory outsider, pretending to be a friend who had our best interests at heart.

I think in order for us to finally win free of our historical struggles in this country, we need to track down the source of this “integration” curse, call it out for what it is, and get back on the “de-segregation” train to continue on to our correct stopping point. We have to, because without our own power bloc composed of our own independent businesses and a control over our own sub-economy that contributes to the whole, any progress we've made in the last 50 years since integration will really be only shallow and illusory.
Posted by M. Rasheed at 10:57 AM