The Black American's Relationship with the White Liberal


CITATION
Rasheed, Muhammad. "The Black American's Relationship with the White Liberal." Cartoon. The Official Website of Cartoonist M. Rasheed 18 Jul 2021. Pen & ink w/Adobe Photoshop color.
ARTIST'S DESCRIPTION
This #MRasheedCartoons image was created as the cover to a FB thread I took part in last night. The original poster shared a meme that said it was "smart" to get the experimental vaccine, and when I queried how could it be smart to blindly get a vaccine through gambling and fear when there is ample reasonable & logical reasons to doubt the mess, I was dog-piled upon by a coven of foul-mouthed, uncouth white liberals.
*******************
Milt Priggee - Ray Laxamana posted: "NEWSFLASH! No one is 'forcing' you to be vaccinated. Honestly, we just hoped you were smart enough to do it."
Muhammad Rasheed - ???
What's "smart" about allowing people to inject you with an experimental substance that they didn't have to prove actually did what they claimed it would do before they received the patent under suspicious circumstances?
Keith Brown - @Muhammad... Well, the numbers don't lie. It has worked and it won't change your DNA or make you magnetic. Perhaps you are merely being selfish and hysterical.
Muhammad Rasheed - What "has worked?"
Muhammad Rasheed - So far the only thing that "has worked" is that everyone seems to have collectively agreed to not only go along with pretending it's really a functional vaccine just so they don't have to stay cooped up in the house any more, but now people who have gotten it are starting to peer pressure/bully the ones who haven't gotten it.
Muhammad Rasheed - Obviously, these colluding cartels that you trust so much are banking on people like you successfully bullying and peer pressuring the public until a critical mass of the populace accept it, after which their cronies in government will feel comfortable making the experimental vaccine mandatory by law to get the rest.
Roger K Eriksen -

Steve Lefkowitz - Once it becomes clear that we’re able to keep up with the variants with on-going booster shots., it’s tempting to say “let ‘em get Covid”. I’m sorry healthcare workers. I know that’ll be hard on you. But there will be something both poetic and Darwinian about the economy opening back up for the non-paranoid and civic minded, while it remains a deadly threat to conspiracy-friendly Fox /Newsmax/OANN viewers. And PS: the Murdoch family is all vaccinated. They may be social pariahs, but they’re not idiots.
Keith Brown - @Muhammad... *sigh* Ok. Then never, ever, ever go to a doctor or seek medical treatment of any kind for any reason ever again, ok?
Denise Palesch - You’ll be missed, Mohammad Rasheed. A lot.
Muhammad Rasheed - The problem is that proving the substance worked as a functional vaccine was part of the requirement to get the patent, but the team was able to get the patent (meaning they were able to license it for profit under exclusivity IP laws) without proving it actually worked.
That means it's not a vaccine. It's a money grab pretending to be a vaccine. That's why the COVID-19 cases aren't being controlled by it at all.
Muhammad Rasheed - Steve wrote: "And PS: the Murdoch family is all vaccinated."
How do you know?
Steve Lefkowitz - Miscellaneous articles about influential people like Trump and Fox News Management who get vaxxed and yet hypocritically enable the anti-vax movement. My awareness of Fox News goes back to May 2020 when ur was reported that the offices of Fox News had strict protective measures in place yet was full - on “Covid conspiracy “ on the air.
Muhammad Rasheed - Steve wrote: "miscellaneous articles about"
What are you using to determine whether your preferred articles are the truth and my sources are the fake conspiracy theories, please?
Steve Lefkowitz - @Muhammad... 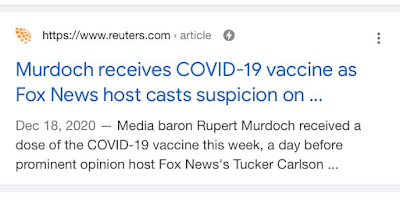 Steve Lefkowitz - I’m done. Have a great day
Muhammad Rasheed - Before you go, please tell me what are you using to determine whether your preferred articles are the truth and my sources are the fake conspiracy theories.
For the record, I didn't post anything about "change your DNA" or "make you magnetic" or anything like that.
Muhammad Rasheed - Keith wrote: "Well, the numbers don't lie."
What "numbers" are you talking about exactly, please?
Muhammad Rasheed - It would help a lot if, instead of all of your name-calling and condescending snarky comments, if you could instead provide the information that definitively proves this is not only a real vaccine, but that it works as advertised. They same material that you yourselves used that made you true believers.
A civil, quasi-formal argument that proves your position is enough to persuade someone willing to have the discussion.