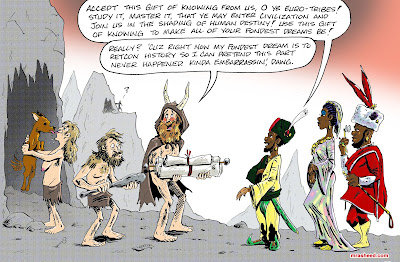 Ioannis Puliafito - Why is the American culture (and much of Western culture) centered around ghetto street culture? When did the admiration of intelligence and fine arts become outdated, leading to a take over of pop culture?

Muhammad Rasheed - The use of the politically-charged buzz words “ghetto street culture” strongly implies a racial bias by the Questioner, but I don’t want to harp over-long on that part. I actually want to explore the much more interesting core thought presented, but first, from my own perspective, it seems as if there is actually a saturation of poor white culture throughout popular media, and it has been for generations now. Did you mean that group’s ‘low brow’ culture, too, or just the poor Black culture as implied by the precise words chosen in your Question?

Anyway, I’m interested in the idea that Western culture used to admire “intelligence and fine arts” and then it stopped. It’s pretty clear that the goal of questions like this one is to do little more than reinforce and maintain the toxic, mainstream white supremacist narrative by fishing for like minds, and pontificating at length over the lie that [decode] “the liberals are tainting pure, superior white culture by forcing the inferior mud races to be outside of their lowly nature and treating them like they’re real people!” [decode] The fact that the question’s author is high-fiving all the answers that sound just like that ("thug" music? really?), reveals this tired old agenda. When we look at the linear thread of the historical record we find the following:
The “admiration for intelligence and fine arts” was clearly only an effort by the new white aristocracy to ‘put on airs’ so to speak, as it wasn’t natural to them. Obviously their forebears were duly impressed with their early encounters with the Blackamoor civilizers—who built the celebrated castles of Europe and taught the ‘royal’ families of Europe how to bathe and read—so the civilization their colonialist descendants built in the wake of their conquering sprees were no less than the white elite attempting to mimic what they remembered from the tales oft told. Now many generations later, with the memory of who they were originally seeking to emulate lost in the retconned pages of white-washed time, these new generations have returned to their nature, where they prefer King of the Hill, Jackass and Donald Trump that more accurately reflects the poetry in their souls than any alien intelligence and fine arts ever did.

So to answer your question, “…when did admiration for intelligence and fine art become outdated?” my answer is as soon as your retcon of history was complete, and you forgot the faces of the people who civilized you. That’s the point when your children returned to type.

While a thought out answer, this does not really adress what I am asking. I have no racial implications in this question actually. The Youth of America today focus on activities that carry very little weight(social media popularity, etc, I’m sure you get my point.) Anywho, I believe this derived from Street Culture, and I did not state “Black Culture”, so I don’t know why you believe I was pinpointing a certain group of people. Whether Caucasian, African, Latino, or Asian, I see American youth of all races largely enjoying “Street Culture”, which is associted with, obviously, Street life in the ghetto.

You begin to bring into play questionable and unhistorical truths such as the Moorish people building European castles, and Egypt being an African Civilizarion(which I assume you mean Black, not Middle Eastern Egyptian).

I’m just asking how American Youth and their culture has shifted so drastically in only an estimated 200 years.

Muhammad Rasheed - I meant exactly what I said.

Tell me what you meant by “ghetto street culture.” Whose culture is this that you’re referencing?

Muhammad Rasheed - You asked “when did admiration for intelligence and fine art become outdated.” My answer is “as soon as your retcon of history was complete, and you forgot the faces of the people who civilized you.” That’s the point when your children returned to type.

Ioannis Puliafito - American youth culture. Maybe you should reread my previous comment which I believed to be thorough. If it wasn’t, this is what I am stating:

Let’s take the word “ghetto street culture” out of the mix, since I am detecting unwanted tension. Children of all ethnicities and races are spending their time with lethargic activities(social media), and listen to music that is very negative(Profanity, drug related themes, etc) However say 200 years ago at the origin of the U.S, many children studied, and intelligence was promoted within society, as well as self improvement.

THIS is what my question is trying to convey.

Muhammad Rasheed - 200 years ago was 1818. Obviously my first answer is the answer to your question, you just don’t like facing truth. You prefer the white supremacist narrative that’s pushed in the mainstream as the truth of history so of course my answer isn’t “what you were looking for.”

Ioannis Puliafito - I don’t understand how the truth of history plays a role in my question. I’m only talking America, which was founded fairly recently, and had different values and culture than today, and I’m asking how American culture of the past youth has evolved into today’s American culture of today’s youth. While writing this questions I never had any racial implications nor did I seek to debate history, so I’m not sure why you are bringing up the intelligence of African civilizations. Any who if you can answer my question now, knowing what I’m looking for, that would be great.

Muhammad Rasheed - Ioannis wrote: "I don’t understand how the truth of history plays a role in my question."

The very nature of your question is comparing peoples in history. lol

And yet, you have "and much of Western culture" in parentheses. Curious.

Ioannis wrote: "...and had different values and culture than today..."

It has the exact same anti-Black systemic racism values and culture it's always had.

The mainstream culture of both today and yesterday was "redneck culture." Only the elitist class put on the airs of 'admiration' as mentioned in my Answer to your question. The average citizen has always admired the criminal class. What you are 'remembering' isn't real on a grand scale. Only the white people in charge of the institutions with their efforts to push the White Supremacist Ideology narrative, were trying to believe what you falsely think was a nation-wide thing.

Ioannis wrote: "While writing this questions I never had any racial implications..."

That's a lie. I see that you enthusiastically 'high-fived' an Answer from a Quoran who regurgitated that typical anti-Black "thug" talk, too.

Ioannis wrote: "...nor did I seek to debate history, so I’m not sure why you are bringing up the intelligence of African civilizations."

Ioannis wrote: "Any who if you can answer my question now, knowing what I’m looking for, that would be great."

The guy who was talking about "thug music" clearly wrote what you were looking for, and in the process, proved without doubt your Question was saturated with everything you've denied. Typical.
_________________________

"The fame of the ancient Ethiopians (ancient Kushites) was widespread in ancient history. Herodotus described them as the most beautiful and long-lived of the human races, and before Herodotus, Homer, in even more flattering language, described them as the most just of men, the favourites of the gods. The annals of all the great early nations of Asia Minor are full of them. The Mosaic records allude to them frequently; but while they are described as the most powerful, the most just, and the most beautiful of the human race, they are constantly spoken of as Black, and there seems to be no other conclusion to be drawn than at that remote period of history, the leading race of the Western World was a Black race." ~Dame Flora Louise Shaw, Lady Lugard (19 Dec 1852 – 25 Jan 1929)

"The accident of white predominance should not give us supercilious ideas about color or persuade us to listen to superficial theories about the innate superiority of the white skinned man. 4 thousand years ago when civilization was already 3 thousand years old, white men were a bunch of semi- savages on the outskirts of the civilized world." ~Joseph Martin McCabe (12 Nov 1867 – 10 Jan 1955)

"For the first two or three thousand years of civilization, there was not a civilized white man on the earth. Civilization was founded and developed by the "swarthy" races of Mesopotamia, Syria and Egypt, and the white race remained so barbaric that in those days an Egyptian or a Babylonian priest would have said that the riffraff of white tribes a few hundred miles to the north of their civilization were hopelessly incapable of acquiring the knowledge requisite to progress. It was southern colored peoples everywhere, in China, in Central America, in India, Mesopotamia, Syria, Egypt and Crete who gave the northern white peoples civilization." ~William Montgomery Brown (04 Sep 1855 – 31 Oct 1937)

"Europeans were by no means the pioneers of human civilization. Half of man's recorded history had passed before anyone in Europe could read or write. The priests of Egypt began to keep written records between 4000 and 3000 B.C., but more than two thousand years later the poems of Homer were still being circulated in the Greek city-states by word of mouth. Shortly after 3000 B.C., while the Pharaohs were building the first pyramids, Europeans were creating nothing more distinguished than huge garbage heaps." ~Robert Roswell Palmer (11 Jan 1909 – 11 Jun 2002) & Joel G. Colton (23 Aug 1918 – 17 Apr 2011)

“They [the white European] are nearer to animals than men […] They are by nature unthinking and their manners crude. Their bellies protrude; their color is White and their hair is long. In sharpness and delicacy of spirit and intellectual perspicacity they are nil. Ignorance, lack of reasoning power and boorishness are common among them.” ~Basil Risbridger Davidson (9 Nov 1914 – 9 Jul 2010)