A Packaged Kind and Well-Meaning Sabotage of Black Empowerment 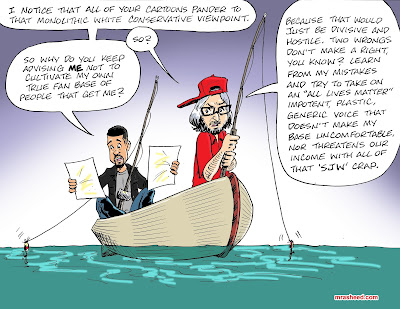 Loron Brazelton - Great that your fanbase gets you. But can you get them together to get that reparations money?LOL Draw that. Then you won't have to worry about our white views.

Muhammad Rasheed - This is my first time encountering your particular point of view on that topic. Usually whites turn into infuriated, froth-mouthed beasts of pure anger when the Black Reparations topic comes up. I'm fascinated at your attempts to bait ME with it. lol You are making me think about it from a new angle now.

Loron Brazelton - We are upset. Why do you think we call police in nice neighborhoods. Why do we belittle fast food workers etc.. How can we make people feel lesser than. In Order to feel lesser than they would have to have less. And we have mastered that game well. With both ends or all rather. Asians want to be like us, spanish that come here, and other races. Why? Because to them we mean something. But we have mastered nothing more than a myth to those and they easily follow. So much to the point that we have blinded you all from wanting your own money. It's fairly easy when you think about it. Yes we have hate but more importantly our goal is for you all to not ask. So we redirect you. It's very easy. We have been doing all races like this for years.

Muhammad Rasheed - Loron wrote: "So much to the point that we have blinded you all from wanting your own money."

I'm fascinated watching you continuously present this concept to me with a straight face. lol

Muhammad Rasheed - MLK, Jr. was assassinated because he set his jaw and was determined to get that Reparations cheque for his people. It is denied because the oppressor class never stopped plundering Blacks and now use a misdirection propaganda to pretend they aren't racists anymore (it's all in Black people's heads!).

Loron Brazelton - Don't try to use psychology on me.lol We invented that. someone mentioned Black wall street in one of your other post. If whites stopped that. Then why wouldn't we stop you all from your own money whats due to you. But yet you all would rather fight in the street over chump change. It's funny and to the point where we have our own losers trying to rap and act black yet make more money than the blacks they potray.lol But yet we scared you all away from your own money. This is funny and a truth you can't deny. And to my strong point it can't be denied. And so that is why i bring it up. Well because blacks don't. And i find it funny.lol

Muhammad Rasheed - The interesting part of Black Wall Street to me is that it wasn't the race 'riot' that stopped it. The Black citizens regrouped and built their community back up bigger than ever. What stopped them eventually was the 'Integration Era.'

Muhammad Rasheed - I was referring to the political cartoonists in context, but we can toss book authors on that pile, too. I would guess it was quite a few of the lot, considering how well that group sticks together and supports one another economically. It is enviable.

The Holy Qur'an 8:73 --- "The Unbelievers are protectors, one of another: Unless ye do this, protect each other, there would be tumult and oppression on earth, and great mischief."


Jason Pell - Fair enough. Ok, so which successful political cartoonists are you thinking of?

Muhammad Rasheed - All. Including the one caricatured in this piece.

Jason Pell - All. Of course.

Muhammad Rasheed - Of course. All of the successful cartoonists who pander to their own fan base achieved that very success because they patiently cultivated their fan base. This is common knowledge in general. It shouldn't be odd that it would work within specifics like group political partisanship and cultural ideology.

Mike Beckom - just a couple from my archives to offer counter-point to your comments.

Mike Beckom - you just keep standing on your street corner screaming, though.

Muhammad Rasheed - @Mike... Please note that the monolithic white conservative party planned to scapegoat Mr. "Drain-the-Swamp" Corporate Outsider from the moment Ted Cruz did his song & dance on record condemnation of Trumpamania at the RNC. This is the only way they can recover their brand after the way they've behaved in the last 17 yrs or so. They are definitely going to attempt to pin every single crappy thing they've done in the last 2 decades on Trump and their base will dutifully follow along.

So you taking soft-as-cake potshots at Trump, that are every bit as impotent and harmless as taping that 'Kick me' sign on a grade school rival's back, absolutely do NOT give the impression that you don't cater to your base. Y'all knew Trump was hot dripping garbage when he showed up, but you support him anyway because that's your greatest strength: You take care of each other. Did you notice that Paul Ryan turned on Trump the second he formally severed himself from the party? lol

Mike Beckom - Ok, let's start form the end of your post and work back. Ryan has never been a fan of Trump. Never. He has tentatively gone along with the company line because he realized that to do otherwise would've been political suicide.

I took shots at Trump that were seen by THOUSANDS of readers in my home state of SC ( a traditionally RED state). While you see them as 'soft-as-cake' they were most assuredly not received as such by the folks here in SC. You and I take different paths to achieve our message. You call mine soft, I see yours as exhaustively petulant.

I was not a Trump fan. He was not my first choice. HOWEVER, given a choice between him and that batcrap crazy Hillary, that choice was easy. That woman would've been 1000 times worse for this country than anything Trump has or will do.

As to your toon, I never once suggested that you cease pandering to your base. What I suggested was that to continue on your present path would never get your message to any other group that COULD help enact change - other than the handful of folks you street corner preach to with your work. The vast majority of folks 'not in your circle of trust' will not espouse your beliefs, side with you for change, or even take the time to read most of your toons because as I've already said....they are exhaustively petulant. You come across as the most pissed off, paranoid, unhappy camper in the country. I think that point was driven home to you quite distinctly during your foray onto the Cartoonist's Cafe page. I try to see your toons for the artistic works they are. Your constant attacks on all things 'white' paint you as one of the very things you preach against...racist. I've often tried to imagine what it would be like to go out to dinner with our wives. The evening would most likely start out well but would I'm sure, devolve into political discourse where you drone on and on with your conspiracy theories until my wife and I have enough and bid you goodnight - never to revisit another dinner with you.

Mike Beckom - I'd like to be open minded and remain friends with you. I have found that the more I look at your toons, the more hate-filled, divisive and racist they appear. While we agree to disagree on most things and try NOT to change one another's minds, I am truly taxed to remain understanding of where you're coming from. Lots of folks 'unfriend' folks on here and the other rarely knows. I'll be more forthcoming.....I'm going to unfriend you. Not because I oppose your views (you're entitled to your opinions as am I), not because of your religion, the color of your skin, your job, status in the community, etc. I'm going to unfriend you because it's become too tiresome to see the same ol hate spewed forth in every single thing you write, draw or tag on FB.

Bakkah Rasheed-Shabazz - @Mike... Just imagine how exhausting the use of excessive force against Indigenous Americas of African descent, whose great grandmothers were raped and forced to give birth to Englishmen’s, Irishmen’s, Frenchmen’s, German, and other colonialist’s offspring. That past history that’s been referred to by the “Demander and Chief” is called “America’s Greatness.” I have included a newspaper clip from February, 1988, to show our family’s experiences with the colorblind perceptive that you believe Muhammed must adapt to convince a “broader audience” to show empathy. I am sure you have noticed by now that Trump and the left are not capable of any normal human sentiments towards any people condemned to suffer discrimination based on xenophobic ideologies. 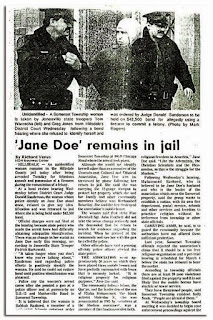 Mike Beckom - @Bakkah... my ancestors were Cherokee Indian. Not 'Native Americans'.....Cherokee Indian. They had their lands stolen, their property seized, their families separated - killed - and relocated . . . and they were killed for sport....or because they had the audacity to breathe. People of African descent can't really tell me bupkus about how badly their ancestors were treated. So were mine. I grow tired of Muhammad's droning on and on with everything he creates or posts because it is just that.....tiresome. If any of us were to have reason to be disenfranchised, pissed off or in want of seeing long overdue change...it is MY people. And yet, I do not put that into every thing that I post. I enjoy my friendship with Muhammad. I would like to continue it.I am not disposed to do so and remain a target of his hostility or a practice audience for one of his unending slew of tirades.

Muhammad Rasheed - Mike wrote: "I took shots at Trump that were seen by THOUSANDS of readers in my home state of SC ( a traditional RED state). White you see them as 'soft-as-cake' they were most assuredly not received as such by the folks here in SC."


Muhammad Rasheed - Mike wrote: "I never once suggested that you cease pandering to your base. What I suggested was that to continue on your present path would never get your message to any other group that COULD help enact change [...] I think that point was driven home to you quite distinctly during your foray onto the Cartoonist's Cafe page."


Muhammad Rasheed - I'm genuinely curious what you mean when you say "hate-filled, divisive and racist." Could you point out examples of these in my work so that we are on the same page?