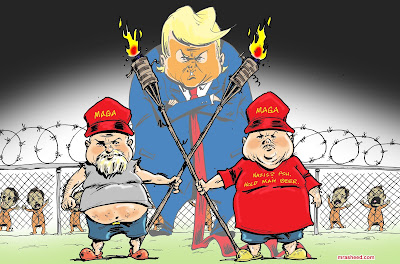 Gary McCoy - When a person commits a felony in this country, they are separated from their children. We don't put children in prison with their parents. Separation happens all the time.

Mark Fleck - When people claim asylum in Canada we set them up with free accommodation ( not a jail cell ) free health care , food and help

Looks like Canada does things a little bit better

Muhammad Rasheed - When did seeking asylum with the USA become a felony?

Stilton Jarlsberg - It's not, when done at an actual port of entry. If, however, one crosses the border illegally, it's a misdemeanor the first time and a felony the second time. And people being prosecuted for felonies of ANY kind are separated from their children.

Why do you all keep calling these innocent people Trump's people are savaging "felons?" How much are you being paid?

Stilton Jarlsberg - @Muhammad... the law - the same law in force under Obama - says that people attempting a SECOND illegal entry are committing a felony. If you point out which words you can't understand in that sentence, I'll try to break things down into fewer syllables for you. Happy to help!

Woody Woodrow - When did breaking into someone's home, become a crime? Its the same thing. You want amnesty, you go to a border entrance and ask for it. You don't break into the country ILLEGALLY and then Demand amnesty. There are consequences for breaking the law as thier should be.

You two are making up nonsense to justify evil and you expect me to take you seriously while you do it. lol You should stop.

Stilton Jarlsberg - @Muhammad... wow, what a non-response. I just told you what the LAW is, and what it has been for years...and you say I'm making it up. It would be so very, very easy for you to fact check but you don't. I'm guessing it's not because you're lazy, but because you already know you wouldn't like the truth.

Gerry Harris - @Muhammad... They both just schooled you like a little bitch. Slither back to your Mosque.

Muhammad Rasheed - @Stilton... It's adorable that you think your posts were real responses to me. awww...

No, you told me nonsense in an effort to gaslight me, and then decided to double-down on it when I said, "You should stop."

Seriously. You should stop. I'm not interested in your foolishness. Take that Gerry character with you.

Stilton Jarlsberg - @Muhammad... Well then, please correct my "nonsense." Is it or is it not a felony to enter the country illegally a second time? I'm not asking for your opinion, nor advancing mine - just a statement of fact.

Which, I'm pretty sure, is why you wanted me to stop. You've got nothing.

Muhammad Rasheed - What I have is a deplorable 45th POTUS who cheated his way into office and has a long history of attacking people based on race and ethnicity. His "build the wall!" slogan is built upon a hatred and vilification of anyone not from a European country hoping to come to the USA for a better life. He chose Jeff Sessions for the A.G. position because of the latter's commitment to restoring the strict immigration policy of a time period in which poor whites were given nigh-unlimited affirmative action policies that grew them into the middle class to the exclusion of all other non-white legal Americans. The restrictions on immigration during the time ensured that only the designated whites would reap the majority of the benefits intended for them. Both Trump and Sessions admitted in the last few days that they are torturing these families and deliberately abusing their kids to manipulate the GOP's political rivals into giving them the immigration policies they've been pushing for.

Because of all of this, anything you type that pretends this is all just simple black-n-white legalese that's magically divorced from the evil scum oozing from this Administration's brainpan, is complete nonsense designed solely to justify the unjustifiable. That's why I want you to stop. You lack value.

Stilton Jarlsberg - @Muhammad... In other words, the answer to "is it a felony to enter illegally a second time" is yes.

See how few words it takes to tell the truth?

Muhammad Rasheed - I told the truth, you chose to step around it and continue to spew your justifications to support your beloved deplorable POTUS.

Stilton Jarlsberg - You gave your opinion. Which, I'm sure, is indistinguishable from truth in your world.

Muhammad Rasheed - All of those bullets mentioned are the truth. In fact, they represent why you love and support Trump.

Well, your responses were interesting to me, Jarlsberg, because they’ve tipped your hand. On the one side you are telling me I need to look up your strawman-spewed nonsense just because you pronounced it as real, while on the other side you casually dismissed everything I pointed out about Trump & Sessions without even attempting to address it. That means to me that you aren’t really the diehard conservative Trumpamaniac you portray; you are just playing a character for your entertainment business, similar to Stephen Colbert’s old Comedy Central show. Somewhere along your journey, you decided that creating content for the white conservative was both easy and lucrative, so you threw all your juice in that direction.

I don’t believe you are any more secretly a diehard liberal than you are a true conservative though. I think you just don’t mind following the money wherever it leads and have zero scruples as to how you go about acquiring it. Consequently, when you attempt to both play the intellectual (“It would be so very, very easy for you to fact check”) AND dance along to that nonsense conservative rhetoric script, it causes you to clumsily fall apart like you did here. 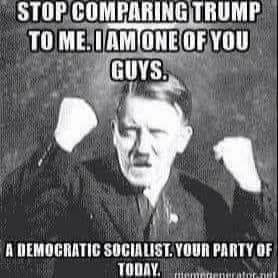 Chuck Hammond - The real truth is that the Nazis, like the KKK and other typical tyrannical perverts were started by some form of the Democratic party. IT's time to hunt them down and start arresting people like the Clintons, the Obamas, Comey, McCabe and Strodk et al.

Muhammad Rasheed - The truth is that the anti-Civil Rights Southern Democrats (called "Dixiecrats" during one campaign) were successfully courted by the Reagan Administration. They switched parties en masse and joined the GOP through Lee Atwater's 'southern strategy' that mimicked the rhetoric they were used to.

Hitler's people are now the "very fine people" who voted for Trump. Take a bow.

Chuck Hammond - Besides skewing the truth the very fine people who brought the KKK and the JIM CROW Laws to you and your kind were both died in the wool racists and Democrats. The Dixiecrats were the more enlightened version of future members of the GOP. Social Democrats, Democrats and Sociatry lists historically have alway been the base from which Hitler, Mao and Stalin types emerged. I suggest you improve your knowledge of these movements before you spot off. Not sure if I like your cartoons or not. The Graphics are great but you are often too wordy. You might remember the old adage "Less Is MORE".

Meanwhile, the Dixiecrats were the anti-Civil Rights version that Reagan captured. #TryHarder

Chuck Hammond - I guess we will have to agree to disagree in order to remain civil. Do however, tahe a second to think about less is more in your toons.

Muhammad Rasheed - It would be better if you just tried using truth and facts in your discourse, bud, instead of whatever you lot are used to using.  :)