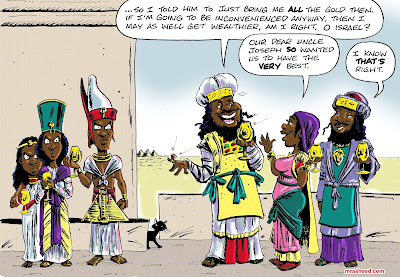 Q: How would you distinguish between the racism of the Atlantic Slave Trade and the quality of the slavery experienced by the Jewish people during their time as slaves in Egypt?

Muhammad Rasheed - The poor treatment the children of Israel received by the Egyptians was born from jealousy. When their ancestor, the prophet Joseph (peace be upon him) was elevated to a high-rank by the Pharaoh of his day, remember that Joseph used his position to send for his entire family and had them living like lords, including his knucklehead brothers. Their descendants enjoyed their new quality of life at the Egyptians’ expense and obviously weren't shy about it. The new Pharaoh of the Exodus period obviously echoed the resentments of his people, and punished the children of Israel for it.

By contrast, the victims of the Atlantic Slave Trade had been reduced to product/livestock because of the obscenely huge profits made from that system. The Dutch East India Company and its immediate rivals functioned as the prototypes of the modern ultra-greedy mega-corporations, and they quickly stopped looking at the trafficked Africans as humans at all in order to keep that gravy-train of money rolling in. The dictionary definition of what "racism" means developed as the justification for why it was acceptable to do this to people.

Kirb Brimstone - I don't get it. explain.

Michael Daniels - I honestly don't get what you're saying here.

Muhammad Rasheed - This scene represents the source of the Egyptian resentment that led to the children of Israel's persecution and abuse that Moses had to save them from later. I thought it was obvious. No?

Michael Daniels - I don't want to argue with you but my understanding is that the Egyptians, specifically the new Pharoah was concerned that the Israelites were multiplying at a faster rate than them and were blessed by Yaweh while the Egyptian pantheon was not blessing the Egyptians at all.

Muhammad Rasheed - I don't see the conflict. The Hebrews were blessed, enjoying the best of Egypt that the prophet Joseph (peace be upon him) provided for them, and they certainly weren't shy about how they enjoyed it. How that was interpreted by the Egyptians, and the resentments it built in them, led directly to the type of decisions made regarding how they were going to deal with them. The One God saw the socio-political tension as a direct threat to the "your descendants will be more numerous than the stars in the sky" covenant, and anointed Moses (pbuh) to get the children of Israel out of there.

I don't see what there is to argue about, or why you and Kirb even got triggered over it.

Michael Daniels - Your explanation is fine for the most part but your cartoon is antisemitic....it plays on the stereotype that Jews are greedy when all Biblical account says is they had a lot of children....The Israelites were in Egypt for three reasons A) Joseph saved the lives of most of the Egyptians and he directed his family to come...B) God told them to go C) The Pharoah invited them to stay.

Michael Daniels - Also, you have the greedy guy dressed in priestly trappings when the Aaronic priesthood wouldn't even be established until way in the future.

Michael Daniels - There's nothing in scripture that even implies the Israelites were fixated on gold or that they "weren't shy about how they enjoyed it" that's a complete fiction and smacks of blaming the victims. It was the Egyptians who were paranoid...enslaved a whole race of people and started killing their children right out of the womb.

Muhammad Rasheed - Deacon wrote: “…but your cartoon is antisemitic…”

No, it’s not. You’re just uncritically trying to read something into it because you’re either bored, don’t like that I made it full of Black people, or you’re triggered because a Muslim addressed a topic you felt your clique held a monopoly over.

Deacon wrote: “…it plays on the stereotype that Jews are greedy…”

No, it doesn’t. It works from the very spoiled position that the children of Israel were described in during the events of the Exodus. They were gifted with the very best that Egypt had to offer even though no more than three of them were worth a damn when the gifting took place. The descendants of spoiled entitled assholes – who first schemed to kill the prophet of God then changed their minds to trafficking him – who obviously learned nothing at all during the next 420 yrs, demonstrated not only greed, but paganism, ungratefulness, and numerous other negative traits besides. This has nothing to do with modern stereotypes used to insult the so-called Jews of today, and everything to do with illustrating traits chronicled in the Hebrews own scripture about their own patriarchal ancestry.

Muhammad Rasheed - Deacon wrote: “The Israelites were in Egypt for three reasons…”

I agree this is all true, yet none of that nullifies the fact that they behaved abominably before, during and after the chronicled events. The patience displayed by Joseph and even Moses was legendary based on what they famously had to put up with.

That was an artistic decision. I needed the difference between the Egyptians and the Hebrews to be obvious at a glance, but realistically the latter probably dressed in the same outfits as that of the Egyptian aristocracy.

Deacon wrote: “There's nothing in scripture that even implies the Israelites were fixated on gold…”

Compare the OT’s telling of Joseph’s story with that of the Qur’an. You will find that the Qur’an’s description focuses on how righteous Joseph was, while the children of Israel’s account over-focuses on how much money Joseph made. Study to show yourself approved, pleased, and don’t just say it. Do it.

Deacon wrote: “… or that they ‘weren't shy about how they enjoyed it’ that's a complete fiction…”

That’s not fiction, that’s called scriptural analysis based on the context of events and the descriptions of deeds by the personages mentioned. I have no idea what you do when you read the book. Obviously it is far from analyzing the material.

Deacon wrote: “It was the Egyptians who were paranoid...”

The Egyptians were wrong, but their over-the-top reactions didn’t spring up out of nowhere. They were triggered by their guests’ jackass behavior. Did you forget that when we met that particular group they were scheming to kill their brother, the prophet of God, and didn’t care that it would devastate their father, another prophet of God? You’re defending the undefendable.
Posted by M. Rasheed at 11:56 PM