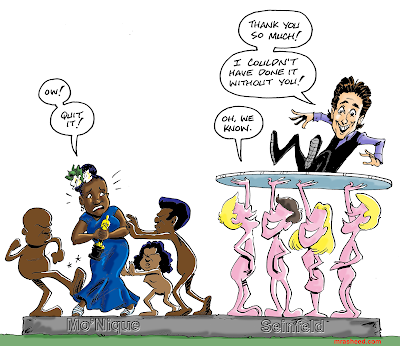 Jeremy Travis - So when Monique brought up this issue a few days ago, I didn't know the context and details and numbers behind it, so I just sat back and looked, listened, and learned. And the more I see, hear, and learn, the more I see that, not only does she have a well-stated, well-constructed, well-reasoned point, she also has a lot of people who couldn't care less about what she had to say, they just want her to shut the fuck up, DESPITE the fact that what she's saying and doing is correct and just.

Marlon Davis - I think she has valid points. Especially after i seen a video compilation of Amy Schumer stealing jokes

Scootsie McKnickey - MoNique literally has never done anything shitty or hurtful to anyone but for soooome reason niggas are aggressively coming for her. Im so confused

Muhammad Rasheed - @Jeremy... I think it's an example of systemic racism/misogyny. Mo'Nique should be able to negotiate whatever she wants with the force of her talent, skill and accomplishments, but they were trying to keep her from that because they didn't want her to do it without playing the game their way. Compare her to Jerry Seinfeld, and see what he was able to negotiate for himself as a low-to-mediocre comedian. Why was he able to do what he did to gain the industry support that enabled him to become rich & famous the way he did? The gatekeepers and power-players allowed him to, but they didn't want Mo'Nique to do it and set a precedent with other Blacks. That game isn't designed for you. Only certain Blacks are allowed through that gate.

kreative_force - why didnt she try to get a special on KweliTv to begin with?


Muhammad Rasheed -Is that you on the left that's kicking her?

Muhammad Rasheed -You could just as seriously ask anybody that same question. Why do you think it's specifically relevant to Mo'Nique? lol Doesn't she have the right to try to negotiate whatever business she wants to try to get for herself?

kreative_force - its not a kick to her. She can't negotiate that with our own up and coming media outlet? I don't see the point in us repeatedly expecting other people's to allow us into their social order. Especially when we have our own that needs our attention. Then when they dont let one of us in or give us a lesser position/benfits we go back to our own people to try and fight our way in. C'mon. Netflix's ice ain't any colder than Kweli's.

kreative_force - Is she right to demand more $? sure. Is it smart to JUST do that? No. If she really wants to reach her audience we have a place for her to do that & she'll get the respect (and pay) she deserves. She shouldn't beg any network for a thing with all the years of work she's put into the industry.

Also, bear in mind that it’s not normal to pursue your own brand under a Black-owned anything. That concept is actively frowned upon by white industry monopolizers AND Black people, and it’s certainly out of the box thinking in this day and age. What she SAW was two high-profile Black comedians and one mediocre, plagiarizing white woman comedian getting lucrative deals with NetFlix and she wanted to throw her hat into that ring, too. That’s a normal move. Out-of-the-box moves from Black creative people tend to come with a whole LOT of bs heat from Black critics, and not everyone is strong enough or willing to go in that direction. Tyler Perry’s success is enviable, but who wants to hear all that crabs-in-a-barrel shit from Black people about it? Oprah? JayZ? Dr. Dre? Will Smith? Every time a Black celebrity makes those kinds of power moves that they are supposed to make, the Black community acts a friggin’ fool about it. So if going to Kweli’s first wasn’t Mo’Nique’s first thought, whose fault is that? Hers? I wouldn’t think so.

Muhammad Rasheed - I suspect she also wanted to make up for the lost time and show up with her own lucrative and vindicating power-move like Chappelle did. I'm more disappointed at the crazy way Blacks are responding to her than I am at her not getting the deal she wanted.
See Also:
Schooling the Dormant Big Voice
________________________________
MEDIUM: Scanned pen & ink cartoon drawing w/Adobe Photoshop color.
SUBSCRIBE and receive a FREE! Weapon of the People eBook by M. Rasheed!