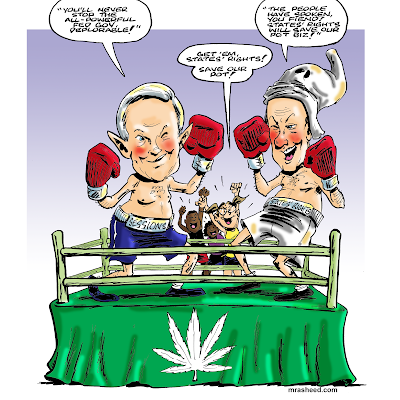 Muhammad Rasheed - That's why this marijuana battle between Sessions vs States' Rights looks suspicious as hell. I think it's a set-up.

TeeKay - If it’s illegal, they can have more arrests and be sent to Session owned prisons. Cha-ching!

Muhammad Rasheed - There's that, but there's also the traditional pro-racism aspect of the States' Rights position. If they successfully push back against the federal gov – because Sessions allows them to – it'll create a dangerous precedent that could be the true aim of both sides.

The Fed built up its power specifically because of the States' pushback over the civil right's fight during the last 150 yrs. There's no way this Sessions vs States' Rights pot battle isn't a smokescreen scam. I predict the two will create some form of "States' Rights Sovereignty Bill" from this song-n-dance, enabling them to bring jim crow or slavery back or something similarly crazy whether its illegal on the federal level or not.
Posted by M. Rasheed at 5:13 PM