Walking Down the Time 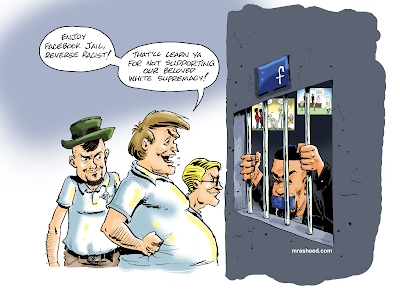 CITATION
Rasheed, Muhammad. "Walking Down the Time." Cartoon. The Official Website of Cartoonist M. Rasheed 25 Jan 2018. Pen & ink w/Adobe Photoshop color.
CLICK & SUBSCRIBE below for Artist's Descriptions of #MRasheedCartoons images!
M. Rasheed on YouTube!
M. Rasheed on BitChute!
**********************
Muhammad Rasheed - As I sit here patiently counting down the time to when I’ll be released from my Facebook ban, I analyze the specific technique used to silence my efforts to use my art to fight the diabolical White Supremacist Ideology and its willing supporters. I posted a cartoon which illustrated a point I made during a #WhenTheAliensCome discussion, and over the next few days a legion of white supremacists showed up to complain and ridicule me. Nearly drunk on all of the triggered drama they provided for me to cartoon later, it didn’t take long before I was banned the first time for 24 hrs. I promptly sent a protest report to Facebook to let them know I was an editorial cartoonist who was being harassed by extremists weaponizing their auto-report system to monopolize Freedom of Expression for themselves. My note was either ignored by FB Admins who were of like-minds to my dedicated enemy, or my complaint was simply too far down in the queue to do me much good. In any event, only a couple hours or so after that ban I was banned again, this time for seven days, in which I now count down the remaining hours.
Once banned, the white supremacists immediately started filling up my cartoon with taunts and vitriol to which I couldn’t immediately respond. To my delight though, I found that I still retained the ability to delete posts and ban people! I used this power freely to prevent the enemy from controlling the narrative of what was going on, removing all posts that (“Well, actually…”) sought to matter of fact proclaim lies as definitive truths to indoctrinate the readers.  Not on MY page you’re not. I left all the comments though that I intended to address within the short time I had before being banned again, which I fully expect since the nature of the attack is pure cowardice. One of my favorite comments I read once the enemy realized I was deleting posts from my invisible-silent realm, was one protesting how unfair it was that I didn’t allow this virtual army of racist trolls to say whatever they wished on my Art Page while I was otherwise unable to address their toxic caucasity directly using my preferred weapons. Isn’t that one of the most classically WHITE things you’ve ever heard? The virtual lynch mob of legions of trolls said it was “unfair” that I used what little tools I had at my disposal to defend myself from their literal attack on my Right to Freedom of Expression. lol This is a sliver of the amazing nonsense we have to deal with on the grander scale as African-Americans.
Although I don’t expect to have very much time as a free man once this 7-day ban is lifted (I wouldn’t be surprised if they flagged/reported every single cartoon in my Art Page folio in efforts to get my entire account deleted), I don’t consider this a loss. The fact that they got triggered and came on the run… from pure word-of-mouth mind you… meant that my work is doing what it was intended to do: Speak truth to power and force them to do some form of damage control to cover up their newly-bared asses for the documented record. The actual content of what they say doesn’t matter very much (they lie as their first language and can never be trusted, since they only care about supporting white supremacy at all costs), but the fact that they protest at all says volumes and lets me know the mission of my art is successful. If they said nothing at all it would be one thing, of course, but they’re the ones that ironically invented the term “triggered” in this context, and it’s only the hurt dog that yelps.
So what is my mission? Outside of basic entertainment, my cartoons adhere to 3 Prime Directives, which are as follows:
1.)   To Make the Complex Simple. I believe this is true of all art, and especially the cartoon media and its naturally inherent emphasis on glyphs, short-hands and symbols.
2.)   To Decode the Objectives & Methods of White Supremacy. The main tool of racists is their propaganda – using gaslighting, repetition of nonsense, subliminal imagery, and other indoctrination techniques – to encode their toxic message into everyone. They indoctrinate themselves to justify their actions and convince themselves it is okay (in fact, their DUTY!) to exploit and plunder Black people. The video below from Agyei Tyehimba describes the specific role of my art best.


3.)   To Make the Oppressor Class Uncomfortable. As Ta-Nehisi Coates points out in the vid below, the racist aristocracy doesn’t get to comfortably enjoy the loot plundered from Blacks. To allow them that comfort is to throw in the towel of cowardice, and hope they toss us a crumb. No. If you aren’t triggering them and refusing to take their bs seriously then you are just as wrong as they are, and count as the “good friends” who allowed evil to rage about with your silence. The fight is a righteous fight.
[EXCERPT] Ta-Nehisi Coates in conversation with Chris Jackson - One World Big Ideas Night
I don’t know if I’ll end up losing my Facebook account in the end, but there are other social media outlets, and other means of distributing my work. What are the chances that FB will make their reporting system less white racist lynch mob friendly in the near future? This is a perfect example of the need for Black-owned media safe spaces, free of the sabotaging reach of the white racist fake patriots.
Posted by M. Rasheed at 12:10 AM