Fear of Abandonment: Motivations for the Origins of White Domestic Terror 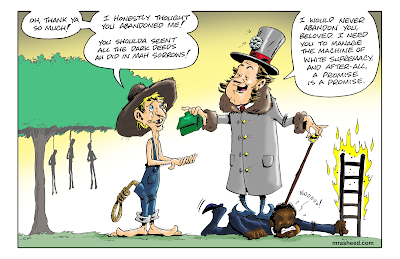 Muhammad Rasheed - The "promise to the white working class" that Bernie Sanders is so focused on as his top priority, is the newly politically correct language for the old pact between the white elite and the poor whites. This is the pact that created "race, racism, and whiteness" that lays as the USA's enduring sin against Black people.

Back in 1619, there was a lot of North American wilderness that needed to be tamed, and the invested moneyed class needed a bondsman class to work it. The poor whites and the Blacks were in the role of indentured servant and slave at the time, but the poor whites were feeling some kind of way about that. They had already spent centuries – even millennia – being the go-to abused stooges for the white elite whenever they needed some labor done. In the unlimited potential of the New World's frontiers, the poor whites decided they didn't want to be in that role anymore, and over the next 230 yrs, the historical record of national policy reflected that the white elite agreed their poor skinfolk didn't have to.

The whites covenanted across class and political party lines to make Blacks the permanent slave class, creating 'racism' as we know it. Now the poor whites would be forever free of being the go-to abused stooge of the white elite as long as this covenant was maintained. Within the new white supremacist society, it was the poor whites themselves who were in charge of managing that system and holding it together in their favor. They knew that ultimately the white elite really didn't care WHO was in that bondsman class, just as long as their gravy train didn't stop. Somebody was going to be in that role and they allowed the poor whites to manage that part, vowing not to do anything that would sabotage the poor white efforts. At a certain point, the whites decided to expand the slave holding states and share the wealth by giving the most industrious of poor whites free lands and the opportunity to pull themselves up out of poverty as freshly-minted slave owners.

President Abraham Lincoln of course said "No," and the slave holders decided to secede and form their own nation to continue their plans. The president said, "Hell, no," and then there was a war.  To end what was to become the bloodiest war in American history, Lincoln played the Ultimate Trump Card by abolishing slavery. In other words, he dissolved the "Blacks as permanent bondsman" concept that not only held together the 'whiteness-by-way-of-antiBlackness' social contract, but was the very source of the 1% white elite wealth!

Once the war was over, the white elite weren't thinking about their pact with the poor whites, since they were desperately trying to figure out how to keep their own income streams coming in. Sharecropping schemes and the proto-mass incarceration were the main ways they tried to salvage the old Black body exploitation racket that amassed the West's obscene wealth, but to limited success. In 1913, when the Money Trust conspired and succeeded in passing the Federal Reserve Act, starting the nation on the fiat-debt culture tract of today, then the 1% were finally able to recover fully. Over the next few decades, they were able to replace the slave institution wealth-building apparatus with a real estate/housing wealth-building apparatus (among other things) and their fortune was once again secured and growing.

Meanwhile, during the time when the white elite were trying to keep their legs from falling out from under their decadent lifestyle, the poor whites were FREAKING OUT! The Reconstruction Era was a nightmare for them as they watched the newly freed Blacks emerge from their shackles to become literate, property-owning, politicians... and they were GREAT at it. The poor whites thought that it was just a matter of time before they replaced the Blacks as the 1%'s abused stooges again, and they went on a barbaric wave of domestic terror to sabotage the rapidly elevating Blacks at every rung they could reach. This emotional outburst of pure fear birthed the century-long Lynching Era, as the whites not only desperately tried to hold onto their artificially propped up status in the racist aristocracy, but they mourned the major come-up promised to them in that old pre-Civil War covenant with the white elite. Forced to live and work together as both races competed for jobs in the same factories across the nation, whites continued to release their pent up resentments with regular lynching parties.

Eventually the evil Lynching Era came to an end when the white elite used the credit system to enable the poor whites to receive their long ago planned come up into the middle class in the new segregated housing schemes that continue the trend of exploiting and plundering Black people. Now that they were once again assured that the "promise to the white working class" would be upheld by the white elite, the poor whites finally calmed down and only terrorized Blacks enough to maintain the status quo. When President Barack Obama was elected, the poor whites freaked out again, assured that the first African-American POTUS would once again dissolve the "Blacks as permanent bondsman" concept. Although he performed nothing so dramatic as that, president Obama did work hard to enable all of the country's poor to have the obstacles to economic upward mobility removed, which would by default aid the Blacks who were disproportionately affected by a system designed to punish the poor. Even though it would cut the throats of their own poorest members, the whites installed a white supremacist president to follow Obama to ensure that the little bit of upward trajectory gifted to Blacks would be repealed.

This summary is the nature of the systemic racism in the United States of America, and it should be clear that it will never be cured by talking, or appealing to anyone's innate sense of morality, justice or reason. The whites will never willingly release their anti-Black fueled monopoly of wealth & power since they not only refuse to share with Blacks as equals, they are afraid that if given that chance, Blacks will flip the system and rule over whites. They live in quiet terror over even the possibility of such an event, fearing the petty revenges that may be justifiably unleashed upon them by the small cliques among Blacks with less self-restraint. Consequently, every single thing whites say about Black people – whether it's in their political rhetoric, their opinions about Black social lives, their pseudo-scientific opinions about Black physiology in drug use, criminality, evolution, etc., etc., – are all lies designed to maintain their anti-Black, racist aristocracy. The only way this situation will change is to force them to leave you alone.

To do so I suggest you use the Black Boycott. Don't spend any money on white-owned product or services, and the white elite will absolutely want to negotiate. The first thing they will ask for, is for the middle & upper class Blacks to accept a bribe to look away so that they can continue to exploit the poor Blacks. WHEN you reject their offer and counter with:

... then they will allow their poor white pitbulls to attack and the American Civil War 2.0  will begin. I personally think that the sooner we get this war over with the better, with one warning: If Blacks hope to win this war against what seems like impossible odds, I suggest you do so in the Name of the One God of Abraham. I know what you're thinking. You're going on about "but the white man's religion!" and "used to justify slavery!" and et cetera, but it's not what you think. He's not a believer as he pretends; he worships himself as the son of god and pinnacle of human evolution in a white supremacist-fueled fantasy he pulled out of his ass. It's a delusional side effect of the self-indoctrination needed to pull off the systemic racism described above. As long as you make sure to submit your whole will to the One God, the Supreme Creator of reality, you will always have the advantage and will be the victor no matter what. I promise.
Posted by M. Rasheed at 1:08 PM