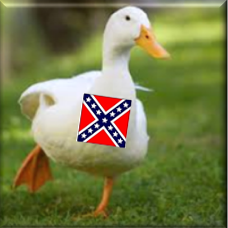 Or as Democratic senator Robert Byrd called it: 'A day that will live in infamy'.

Pat Byrnes - And don't get me started on those damned Whig partiers...

Dianne Hauser - These guys are a bunch of red necks not just in the South but can be found all over in rural parts of states. They and the skinheads hate all races except their own and scare the crap out everyone else. Another blight on our already ragged country.

David Becker - These guys and all social justice warriors should be rounded up separated from the rest of us.

Gary McCoy - Muhammad, is this a contest of who can post the most racist crap on facebook? Okay, I'll see yours and raise you one.

Muhammad Rasheed - Gary McCoy wrote: "...is this a contest of who can post the most racist crap on facebook?"

lol It is NOW! hahaha I was just demonstrating that the same gene pool that the KKK recruits out of, no longer votes Democrat, since you seemed to have missed the memo on that one.

But I see your one "black panther" retard who merely WANTS to kill white people, and I raise you this: Gary McCoy - Just to give balance, there's this...

Now, we could continue counter-punching, but I think it's fair to conclude there are racists of every color. Now, I say we should all hold hands and sing Kumbaya. That is, unless that hand next to you is holding the head of a decapitated Christian.

Muhammad Rasheed - Gary McCoy wrote: "That is, unless that hand next to you is holding th head of a decapitated Christian."

I hope not, since my wife and daughter are Christians. O_O

The Prophet Muhammad (peace be upon him) had a Christian wife. The ruler of Egypt at the time sent her as part of a tribute package, and the prophet freed her and then married her. She was the only one of his wives to birth a son, although he passed away as an infant.

Of interest, the prophet never, ever tried to convert her to Islam. The Qur'an says the Christians are the people of God, as they claim, and as long as they believe and their good deeds outweigh their bad ones, they will receive their reward.

The Christian is not the enemy of the Muslim. Only those psychopaths who merely pretend to follow Islam declare war on the People of the Book.

Gary McCoy - So are my wife and son. So as is often the case, we've come full circle to our usual love-fest. And all is right with the world.
Posted by M. Rasheed at 7:35 AM