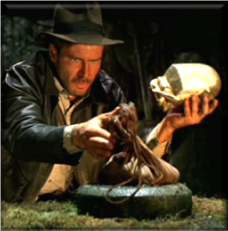 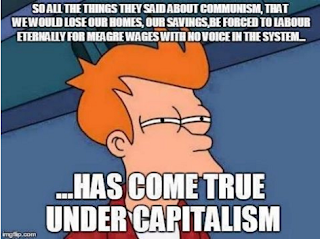 Muhammad Rasheed - Then why do you think you are still under capitalism? They vilified McCarthy, remember?

Zodicus Zu'ul - because the majority of the people are brainwashed into believing that "Capitalism Is Their Friend," to bother looking at what a world we actually live in.

Muhammad Rasheed - Who told you that capitalism isn't your friend? The folk that took your home, your savings, and forced you to labor eternally for meager wages with no voice in the system?

They were the folk that vilified Senator McCarthy.

Allyson Roberts Waller - Yes, you're making his point. No one has specifically said capitalism isn't our friend.

Those that stood for capitalism are now standing for corporate/governmental greed. Thank you for making this so accessible to us.

Muhammad Rasheed - Those that stood for capitalism were chased off. Those that remain are the marxist-communists and the greedy cartels of corporatists. Pockets of capitalism are rare, with the above groups circling over them like vultures ready to stamp them out or usurp them.

Zodicus Zu'ul - Senator McCarthy wasn't standing for Capitalism. he was trying to create a literal state of panic and fear. a scared populace is easily controlled and manipulated.

Muhammad Rasheed - Who told you that? What are you basing that on?

McCarthy's team was tasked to discover evidence that the US gov was infiltrated by members of the Democratic Communist Party. He did so. The worst of those cases was the stealing the Manhattan Project secrets by communist plants/infiltrators. The threat was real, and worse than what everyone thought, and Senator McCarthy found himself all alone in the end, with his original government sponsors having abandoned him as a scapegoat.

The Abandonment & Vilification of an Old Friend

A Sinister Long-Term Goal for America
Posted by M. Rasheed at 6:03 AM