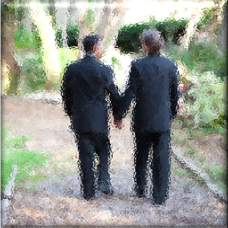 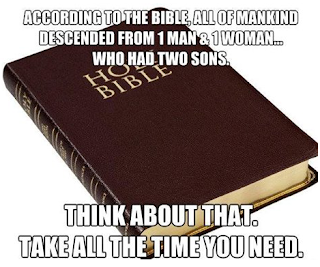 Tom Luth – hmmm... There is something here I seem to be missing...

Grant Keller - To make it worse, one son killed the other.

Edwin Cate - Sorry, but Adam and Eve had more children than just Cain and Abel. Check it out! It's in Genesis.

Rick Araluce - People were "different" then.

Britt Wisenbaker - Actually, popular genetic science discoveries support the notion that mankind is descended from a single maternal ancestor, so the bible account is only uncomfortable to think about, not necessarily contrary to scientific consensus. The implication that Adam and Eve only had two male heirs is not from the bible.

Aaron Kashtan - "And the days of Adam after he had begotten Seth were eight hundred years: and he begat sons and daughters" (Genesis 5:4).

According to Jewish tradition, Cain and Abel married their twin sisters.

Aaron Kashtan - No, of course not. I'm just saying people have been aware of the problem of Cain and Abel's wives since ancient times.

Muhammad Rasheed - lol It's more "correct and true" than the weird disbeliever notion that they ONLY had Cain and Abel.

Danny Ray Barnes - Mother, daughter, whatever. There were no other women other than immediate family.

Forbidding incest when there are only a few dozen humans on the planet wouldn't make a lick of sense. When the population had grown sufficiently to allow it, then He commanded them to not touch close relatives.

Danny Ray Barnes - Notwithstanding, the point of the meme is valid even with the implied snide comment.

Danny Ray Barnes - It really doesn't matter to me, it's all word play, imo. I put no truck in it.

Muhammad Rasheed - Danny, the point of the meme is not valid considering only the disbeliever jumped to the unreasonable and absurd conclusion that Adam & Eve only sired two male children. The point of that story was that the one brother's offering was received over the other brother's because of their attitude in the giving. There was no reason to go into what their home lives looked like. Much irrelevant material was left out of the story, yet the meme creator felt he knew all that he needed to know in order to make his assumption.

Danny Ray Barnes - I understand your POV, and respect it as genuine and thoughtful. They say you can't change anyone's mind in fb, but you have caused me to look deeper at the INTENT of the meme, and I agree it was to make the story sound creepy at best by omitting, intentionally or not, some detail. My main point was that it's still creepy, for those sensitive in that way, no matter if the brothers mated with their mother or their sisters.

You say the biblical rules on incest changed at some point and that seems typical to me, no matter that this particular rule change seems necessary, in the Bible. Your God does not appear to be as unchanging as presented.

Let me add that you seem like a good guy, Muhammad, and I appreciate having a civil conversation on religion for a change. We atheists don't get that from believers often, no matter if we ourselves are civil or not.

Danny Ray Barnes - Merry whatever, brother.
Posted by M. Rasheed at 9:12 AM