A Funny Way of Showing Your Black Pride

M. Rasheed on BitChute!
***********************************
Kevin Grevioux - Heheh.  Frank Cho does it again!
[Frank Cho poster - "Supergirl loves Black Adam, sketch cover"]
Muhammad Rasheed - Does the Rock identify as Black...? 🤨
Kevin Grevioux - @Muhammad... Not as far as know. He once mentioned that he didn't look much like G.I. JOE's ROADBLOCK, but he doesn't look like Black Adam either. However, he does look Egyptian, so...
Muhammad Rasheed - He looks sorta like some of the modern, descendants of Arab Expansionism Egyptian, which are about a thousand years old or so. I don't see what that has to do with the Black Adam storyline though which seems to go back to the Black African golden age of Ancient Egypt judging from the trailer, and they weren't a majority biracial stock the way the recent movies are trying to push.
Muhammad Rasheed - Looks like Cho just assumed he identified as Black.
Bruce Pham - @Muhammad... - Or it's a play on the name and not so much on the race.
Donald Cleveland - @Bruce... BINGO
Muhammad Rasheed - @Bruce... Oh, I see. Just a corny pun off of "Black Adam."
Muhammad Rasheed - It was the responses that made me assume it was something deeper.
Kevin Grevioux - @Bruce... Definitely that.
Tony Puryear - @Muhammad... Yes. It carried some weight with me because he made the assertion in the pages of the old Ebony magazine.
Muhammad Rasheed - @Tony... So, back when he was promoting the "Nation of Domination" storylines, he hinted that he might be sorta Black in a Black magazine, until the group disbanded and he became "cabalasian" or whatever?
Tony Puryear - @Muhammad... If you can find a story or report where he went back on what he said in the magazine, I’m prepared to be convinced, but as far as I know no such reversal story exists. He’s talked extensively about his father and his heritage, and has stayed consistent with it, again, unless you know something I don’t.
Muhammad Rasheed - @Tony... Big crossover star biracial celebrities tend to downplay their Black side (that's why I made the "cabalasian" crack), unless they have some reason to over mention how African-American they are for some kind of self-serving agenda (perhaps they're not really biracial, with the "One-Drop Rule" being more literal than figurative as they run a Dolezal grift, for example). I noticed a while ago The Rock didn't exactly go out of his way to mention he was a Black WWE star or actor (note how he leans heavily into his Samoan side though despite his "both equally proud" claim), so I figured he would go the "I transcended race" angle. This is typical and predictable. It's also not that big of a deal since it's just trivial celebrity culture. 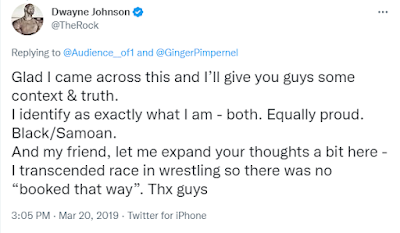 William Satterwhite - @Muhammad... The story Tony is referencing was actually years after the Nation days, it was right around when he was first becoming a major star-
Muhammad Rasheed - William wrote: "The story Tony is referencing was actually years after the Nation days"
lol Oh, okay. Right at the crossover star crossroads of identity.
1.) [WIKI] The Nation of Domination (NOD) was a professional wrestling heel faction that competed in the World Wrestling Federation (WWF) from November 17, 1996 to November 28, 1998
2.) On the March 30, 1998 episode of Raw Is War, the night after WrestleMania XIV, The Rock went on to usurp leadership of the Nation from Faarooq, at which point the group permanently dropped "of Domination" from its name and its militant focus.
Interesting, considering NOD won the vast majority of their matches under Farooq's leadership, particularly notable when they crushed their Puerto Rican and white biker gang rivals. The Rock's version of 'The Nation' would go on to lose almost all of their major matches.
3.) Instead, The Rock's gimmick spread throughout the faction with Nation members taking on considerably more [cartoonish/buffoonish] characters, the most notable being Kama Mustafa's transformation into The Godfather, D'Lo Brown's "bobble-head" and strut, etc.
4.) They mainly feuded with [the pro-Black] Faarooq, who had just been kicked out of the stable.
5.) The group then engaged in a rivalry with D-Generation X (DX) [...] Rock thoroughly humiliating Chyna by alluding to a possible romantic encounter between the two
Cho's poster now seems like a callback...
5.) On the April 27 episode of Raw Is War, The Rock and Mark Henry faced Shamrock and Hart in a tag team match that saw Owen Hart attacking Shamrock and joining the Nation.
🙄
6.) Toward the end of the year, the group showed signs of dissension as Rock's mannerisms and swagger began to catch on with fans. This would lead the WWF to turn The Rock face.
7.) Shortly after the Nation was disbanded, The Rock decided to run solo, riding his immense rise in popularity. He won the WWF Championship at Survivor Series and turned heel again by joining Mr. McMahon's Corporation faction.
lol Hindsight analysis now reveals that the purpose of the 1997 inclusion of Rocky Maivia was to infiltrate and break up the NOD from within by a disrespectful outsider agent.
A lot of pressure. 😏 Choose a pioneering Black star route, or the route of an AllLivesMatter universal 'major' star who "transcends race" by coddling white sensibilities with the symbolic mocking and tearing down of a dominant Black group. #InitiationRitualIntoWhiteApprovedCrossoverStardom
Andrevios Black - He's ALWAYS identified as both Black and Samoan, and all while his father alienated that black side from him. It's easy to get lost in finding a cultural identity when it's not been engrained in you as a child.
Muhammad Rasheed - Andrevios wrote: "He's ALWAYS identified as both Black and Samoan"
Meanwhile, he leans heavily into the Samoan part when the topic comes up at all, and his history with the NOD demonstrates he has no issue partnering with corporate to disband Black groups.
Your blind celebrity worship is getting in the way of the facts.
Mo Riba - @Muhammad... He was in the Nation Of Domination, so...
Muhammad Rasheed - @Mo... "So" what?
He brought Owen Hart into the NOD, too, remember? lol