Awakening from the Exploitation Nightmare


Sebron Snyder - VOTE! To not participate is a slap in the face to all that have died getting us the right to vote and died recently at the hands of a system we need to still work to change.

Muhammad Rasheed - Vote Democratic Party down ballot. Don't vote for the POTUS candidate unless they commit to Reparations for the Black American former slave class.

Aaisha Gilmer Lawrence - @Muhammad... Down ballot is the one that actually will get you the solutions you seek. But you need the top of the ticket to sign it in law. So you need to vote the entire ballot. Also of the two choices who will sign it into to law?

Muhammad Rasheed - The down ballot items aren't going to reflect my specific interest groip political agenda stuff on it in this 2020 election. This is a boycott strategy designed to shake up the system to let the Federal government know that their most loyal constituency will no longer give up our vote without a fair exchange in return. We have been neglected and taken for granted long enough.

Matthew Hill - ...sentiment acknowledged though Kamala was born in the states...

Muhammad Rasheed - Her family is recently arrived in the US while my family has been here before the Civil War.

Muhammad Rasheed - I can't tell whether you are deliberately missing the point or not.

I'm from the group whose political agenda has been deliberately ignored by my government for over a century and a half, yet this outsider immigrant class is being given status over me WHILE she panders my community for our vote after a career of being hostile to us and contributing to the racist mass incarcerate state agenda.

She's a second generation immigrant who is given an elevated status and the ability to help her own people, while my own efforts have been sabotaged continuously for trying to do the same thing for my own. It's offensive and it's offensive for them to try to pressure me to give them my vote for free.

Matthew Hill - Honestly I understand the points you raise about her career and where she has stood on the issues you support, but her family's immigration status shouldn't be coming into it. In my opinion it verges on othering for the sake of othering. On the points you raise re policy and career history shes objectionable at best and downright awful at worst but those facts would remain the same regardless of immigration status. I would object to anyone raising the point of "we've been here longer" regardless of who they are, and as it isn't the crux of your post I think its a distraction from the point you're making. All in my opinion of course.

Muhammad Rasheed - Matthew wrote: "In my opinion it verges on othering for the sake of othering."

Literally NO ONE has been systemically "othered" more than MY group, and I'm being pressured to give up my vote for free -- unique to any other special interest group -- to vote for someone pandering for my vote by dancing and shaking hot sauce on her food and eating fried chicken, because she favors me physically by racial phenotype. That's an insulting grift the immigrant class are being allowed to play at my expense.

Direct ALL of your admonishments and lecturing in THAT direction.

Matthew Hill - There's no point in othering anyone. We're supposed to be living in an enlightened time or striving for more enlightenment. Admonish Kamara for what she's doing not who she is. That's my opinion and we are both entitled to one.

Muhammad Rasheed - Matthew wrote: "there's no point in othering anyone."

I understand why you are eagering running to her defense by pointing out her family are newly-arrived alien immigrants compared to my own, but my bluntly pointing out what is true is not "othering" her. She literally has all the status and prestige while I hold zero. lol Your protests are weak.

Matthew wrote: "We're supposed to be living in an enlightened time..."

The Black American former slave class is MORE politically disenfranchised and MORE artificially impoverished than we were during jim crow. Obviously this "enlightened time" you envision involves my rival Democratic party groups and I am excluded (as usual).

What does the term mean when you use it?

Matthew wrote: "Admonish Kamara for what she's doing not who she is."

I did. The DNC is using its marketing/propaganda arm to manipulate "who she is" for flexible convenience to trick my people into voting for that ticket. I'm sorry this topic and my argument are too nuanced for your position.

Maus Merryjest - Your xenophobia is showing, my dude.

Muhammad Rasheed - I hold no xenophobia. I have nothing at all against the immigrant community. My gripes are against those cliques among them who are:

2) trying to bully me into voting for the Biden/Harris ticket on behalf of white supremacy.
Rhonda Hardy - One thing is for sure, something bad is going to happen if you let Republicans control you with another 4 years of this chaos. Get real you Russian avatar

Muhammad Rasheed - @Rhonda... Something bad has already happened. Trump is no more a boogieman to my ethnic group than any Democratic Party POTUS since they have all ignored my Black Political Agenda. If they refuse to provide my fair & reasonable asks in exchange for my vote then they don't get my vote.

Muhammad Rasheed - Why? The Republicans aren't my party.

James Sullivan - No, but this is definitely about your future! This is no longer about party. It's a fight to stop fascism in its tracks. Check out the Peoples' Convention to get the full perspective on why THIS vote for Biden is neither an endorsement of Biden or the Democratic Party, but is absolutely necessary!

Muhammad Rasheed - @David... No. My message is for my people to vote Democratic Party down ballot while boycotting the POTUS candidate slot. This will simultaneously show engagement in the process while revealing the nature of the flex in the record.

Muhammad Rasheed - James wrote: "No, but this is definitely about your future!"

My future is 100% about economic status and has nothing to do with celebrity politician symbols. Spew your nonsense propaganda to someone else. It literally means nothing to me.

David Rigg - So the Democratics that we complain about, still gets our vote.

And we top it off by helping to give Trump four more years???

Muhammad Rasheed - David wrote: "So the Democratics that we complain about, still gets our vote."

The down ballot affects me at the local level and has more direct impact upon me than the Federal level.

David wrote: "And we top it off by helping to give Trump four more years???"

I didn't vote for Trump. An officially recorded 91% of voting Black Americans voted for Hillary. Most elligible white voters leaned hard for the GOP, so nothing about Trump has anything to do with me. 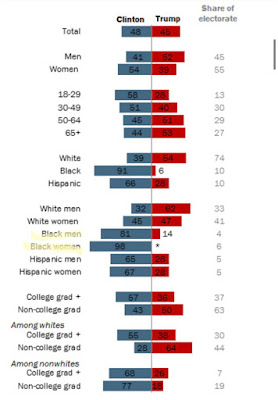 What IS important is that the Democratic Party's most loyal constituency is demanding their long neglected Reparations in exchange for our vote, and if the party wants to ignore that demand, then a win for Trump is once again not our fault. We TOLD them what we demanded upfront.

It means you either don't know enough, or you identify as one of the rival Democratic special interest groups who would actually benefit from a Biden/Harris win. I would not benefit AT ALL from their win since they are sticking hard to ignoring my Black Agenda and continuing the trend of taking me for granted.

Gerri Gibson - I'm seeing this all over the country. Black men not voting or saying the Dems are taking them for granted. This even though we have the worse president in the history of this country. I could say a lot, but will just say black man up YOUR game up. Do whatever it takes to become a powerful force in this country-period. Stop killing each other, get an education or open a business. You dont see Asians telling their people not to vote.

Muhammad Rasheed - Gerri wrote: "I'm seeing this all over the country."

I'm advocating for voting Democratic Party down ballot and ignoring the POTUS slot unless they agree to commit to our Black Political Agenda. That's how voting works -- to give me what my special interest group needs in exchange for my vote.

Gerri wrote: "...or saying the Dems are taking them for granted."

They've done worse than that. They actually disenfranchised me form the process and increased the poverty in my communities.

Gerri wrote: "This even though we have the worse president in the history of this country."

For my ethnic group, ALL 'Integration' era presidents have been the worst in history since Andrew Johnson.

So far, you've failed to say anything to help my people, but you just want me to get poorer and poorer by voting status quo without receiving anything at all for it.

Gerri wrote: "...but will just say black man up YOUR game up."

That's exactly what the #ADOS political unification movement is all about. Notice that our efforts got the Democratic Party POTUS candidates talking about Reparations for the first time in 80 yrs? That was specifically through our efforts & pressure through ADOS chapters in every major city. There will be more, God willing as our numbers continue to grow. #ADOSrising

Gerri wrote: "Stop killing each other, get an education or open a business."

This is ignorant. That doesn't have anything to do with using politics to gain access to capital and resources to uplift the group as a whole.

Gerri wrote: "You dont see Asians telling their people not to vote."

Because they have a powerful immigrant lobby that has more favor with the political swamp than my group does. But that's about to change.

Vince Field - Birtherism is RACISM... f*ck off with this sh*t!

Muhammad Rasheed - @Vince... This isn't a case of "birtherism." I do not deny she is a black woman with a proud Jamaican/Aryan Brahmin Indian lineage & heritage. That was never the issue.

The problem is that my ethnic group, as the ever-abused Black American former slave class, is not being represented, but this woman was being presented as if she represented me despite her long professional career of being hostile to my group on behalf of the mass incarcerate state. This is a fundamental probem and she cannot have my vote without some real benefits to my ethnic group other than the empty foolishness ("Get rid of Trump at ALL costs!") that her ticket is offering me.