Meko Harris - So this group is against immigration?

Gre Go - Like the cartoon! Only if the artist would explain it since I'm not sure I understand the message.

Muhammad Rasheed - It's not an anti-immigrant message, it's an anti- treat all Black ethnic groups in America the same message. Black people are not a monolith, and if you treat all of them the same according to the most successful ethnic groups among us, then the one who has been historically subjugated, exploited and systenically locked out of access to capital, credit and the wealth-building ownership class will fair worse and worse through benign neglect.

Meko Harris - Your imagery is all about money. Immigrant Black are shown with bags of money. It's an anti-immigration imagery used by many.

This is several post where you discuss reparations. It seems like you are a one issue person. I don't assume you do or don't vote. I support some logic around reparations but reparations isn't the sole issue that will change lives.

Muhammad Rasheed - Meko wrote: "Your imagery is all about money."

Politics is all about special interests successfully getting the resources they need from the government for economic advancement as a group. My group has been deliberately disenfranchised from that process for the last century and a half leaving us as a wealthless bottom caste. My economic situation is VERY different from that of the various Black immigrant groups we now share this land with.

Meko wrote: "It's an anti-immigration imagery used by many."
Irrelevant. Nothing in this cartoon says "anti-immigrant." Having money isn't an inherently bad thing, but it is bad to pressure someone else to not fight for the money that has been deliberately withheld/stolen from them.

Meko wrote: "This is several post where you discuss reparations. It seems like you are a one issue person."

I fight for the Reparations that the US government owes my people for the last 400 yrs worth of discriminatory practices, as well as economic inclusion into the wealth-building ownership class promised by the 1866 Civil Rights Act, but cheated me by my enemies among the 1% monopolist class.

Meko wrote: "I don't assume you do or don't vote."

lol I do vote. Currently I'm advocating for my ethnic group to agree to boycott the POTUS candidates in a strategic boycott while continuing to vote Democratic Party down ballot.

Meko wrote: "...but reparations isn't the sole issue that will change lives."

A robust Reparations program is the number one item that my people need to be made economically whole, an item deliberately withheld from me for the last 150 yrs because the white racist aristocracy has refused to share wealth, land & rule with my people since slavery was abolished. This is the nature of my people's fight in the country of our birth and as you see, it has NOTHING to do with you as an immigrant outsider. How about you worry over the issues that concern your people, while I worry over the issues that concern mine and let there be Peace between us?

Yohance Serrant - That’s funny cause I don’t know what $ black immigrants are getting. LOL

Muhammad Rasheed - Giggling over your own ignorance of the topic as if it is a universally shared status is a curious display... 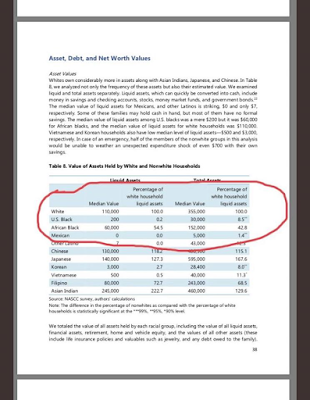 Gre Go - I hesitated before replying to your comments because this is an art group and I really didn't want to have that kind of exchange in here. However, a black immigrant myself, it wouldn't make sense for me not to address some of the statements you've made.

Your art is a reflection of your thinking and you're entitled to that. The message you're conveying is taken in a negative way because it's far from the truth. The screenshot you posted about Asset, Debt, and Net Worth Values for Nonwhite households can be used as a reason for your xenophobia.

Muhammad Rasheed - I have no xenophobia, Gre. Calling for the political unification of my ethnic group so we can pressure our government for the Reparations we have been denied has caused some cliques among the immigrant community to attack us for it. Defending myself from these weird kneejerk emotional smears (we're often called 'russian bots' by some of the most high-profile celebrity immigrants) does not make me "xenophobic."

Calling me that is an unfounded attack.

Gre Go - My post was not to attack you, but only to help you understand that you can't blame blacks from other countries for how black Americans are treated here. My family and I have never kissed anyone's @$$, stole or trafficked anything illegal (wasn't this an attack?). We're living in very hard times right now and the last thing we want is to turn against each other. I have no issue with black Americans asking for reparations (it's your right). I responded to your post because through your artwork you're blaming/attacking black immigrants for not receiving your reparations or for having a higher asset value compared to black Americans. This is wrong! I wouldn't expect it from someone else, but not from someone who looks like me.

Muhammad Rasheed - Gre wrote: "...you can't blame blacks from other countries for how black Americans are treated here."

I'm not. But I am blaming those among them for partnering with white supremacy once they do get here and calling me 'russian bots' and gaslighting me and telling me I shouldn't vote in my best interests as a political group with my own goals and needs separate from other Black ethnicities.

Muhammad Rasheed - This is an example of the idea of "if it doesn't apply to you, then I'm not talking to you."

If you tell me that you aren't guilty of the things presented in the cartoon, but you respond defensively as if the cartoon is calling you out, then you cast suspicion upon your denials. #OnlyHitDogsHoller

Of course it doesn't apply to me, but that doesn't mean I shouldn't say anything if you're making false statements (it's the Internet, we're all entitled to that). You seem like a good artist and I do like the art, but I'll leave it at that. I don't think we will ever be on the same page and my sole reason for being here is for the artwork. We need each other. We do not need to fall into the trap that they want us to fall into. Peace, positive energy, and blessings to you brother.

Muhammad Rasheed - Gre wrote: "I don't think we will ever be on the same page..."

No, because you don't know enough. My ethnic group is in daily battles with these anti-ADOS immigrant cliques I'm talking about, you seem to be unaware of this, but yet you want to definitively proclaim that this is not true based on your emotions alone. Your uninformed kneejerk emotional denial of my reality is the fullness of your argument and it lacks value.

That leaves us at an impasse.

S Michelle Forrester - @Meko... That was exactly my thought too! Black people in the North American diaspora were also enslaved and had to fight for freedom. This divisive message is why we will get no where. There's a larger problem of white supremacy. Until all of us are free, none of us are free. Also, black people are not a monolith. The broad generalization based on people's culture is just as bad. I deeply appreciate art and the different perspectives it conveys, but like Meko said, no one is above reproach...free speech and all that.

Muhammad Rasheed - S Michelle wrote: "Meko, that was exactly my thought too!"

S Michelle wrote: "Black people in the North American diaspora were also enslaved and had to fight for freedom."

My ethnic group is still fighting and is actively being disenfranchised as a special interest as the US gov uplifts immigrant rights over our rights.

S Michelle wrote: "This divisive message is why we will get no where."

This is not a divisive message, it's a message of protest from political activism from the exact same voice my people's activists have always used. And the immigrant community -- with its powerful multi-tentacled lobby -- is in a much better position than my ethnic group.

A "larger problem" than what? Because it seems like you are saying that I should never politically unify as a special interest group to fight for the long-neglected agenda of my own people, to instead use my vote to help other people's agendas instead.

Again, my people are NOT free, while the immigrant community is doing just fine.

S Michelle wrote: "Also, black people are not a monolith."

I know. Out of all of the Black people in America, my group remains the wealthless bottom caste still struggling for the enforcement of our rights so we can finally enjoy the benefits of American-ness in this country we've built. For some reason, the recently arrived immigrant community has dedicated itself to joining white supremacy is attempting to quiet my activist protests. Case in point.

S Michelle wrote: "The broad generalization based on people's culture is just as bad."

What "culture" is being showcased within the cartoon exactly? lol

S Michelle wrote: "I deeply appreciate art and the different perspectives it conveys, but like Meko said, no one is above reproach...free speech and all that."

Your attempts at "reproach" are nonsensical trash.