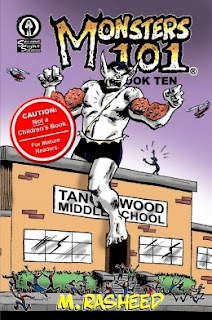 the three cents:
These are dark days among us indeed. I have been reading comic books for over thirty years, since before kindergarten even. I could not begin to count the comic books I have read in my days, from modern self published mini-comix to Golden Age reprint collections and all points in between. I’ve read the silly mainstream superhero stuff and I’ve read even sillier custom comics. I’ve read underground comix and I’ve read translated foreign comics, newspaper strips and webcomics, crafted by men and women of diverse nationalities and even more diverse creeds. As a journalist with friends active in the industry I have even been fortunate enough to read comics that never saw print. I have not read mere hundreds of four-colored funny books; I have read thousands, possibly tens of thousands. And one of my all-time favorite series is drawing to a close, as Muhammad Rasheed’s Monsters 101 series of graphic novels ends with this chapter.


I first made Rasheed’s acquaintance online just a few years ago, during my brief stint writing for the Self-Publishers Association. He was looking for additional press and I was looking for over-looked reading materials. He kindly supplied me with digital copies of his books, so that I could write up my review articles. And I did: Book One, Book Two, Book Three, Book Four, Book Five, Book Six, Book Seven, and Books Eight and Nine. The last few as they were completed. Each volume being a 150 page wonder, eloquently written, intelligently written, and with Rasheed’s one in a million artwork style in brushy black and white goodness. I was quickly spellbound by his universe-building, his vast array of characters from all walks of life of beyond, his mixing of theological ideals with cultural observations, his exuberance for the arcane and the hermetic. His research alone is just astounding. I even interviewed him a ways back. We grew to be pals after a fashion and indulged each other in long email chains discussing philosophy and religion, and aspects of the history of the comics medium. When I was co-editing the Solestar book on behalf of the Naïve Project and the Brain Aneurism Foundation, he readily donated days of his time to knock out some of the prettiest and most professional pages in the mix, ahead of schedule. He has accomplished many projects in his prolific career, but Monsters 101 has been his magnum opus (thus far!), his testament to the ages. In any fiction it is a rare and beautiful thing to create characters that stir in the readership a genuine emotional attachment, and it is even more obscure for such to be done on a consistent basis. And all along my reading of the adventures of his two protagonists, Pugroff the boy bully turned king of the monsters, and Mort, a bright young African-American boy delving into his own path as a future sorcerer supreme, I have felt that attachment since page one. And it grew and grew, as have the characters themselves. I did not always care for the decisions they made in Rasheed’s stories, but that only added to their realness. In the 1500+ pages of material there have been funny moments, and sad moments, awkward moments and frightful moments. And my mind has been blown on more than one occasion. Rasheed is one of the few people who I will admit to being wiser than me, and to consider him a friend is not a statement I make lightly. He is a creative genius, to put it as mildly as possible.


In this final installment, we get many threads wrapped concisely well, with many more doorways opened up for roads yet to be explored. Pugroff goes political, defending his adopted people to the point of changing his eating habits, and Mort finally achieves his largest step in his own quest for knowledge. We get a very, very long-awaited apology, and we even get some biblical references, to expand on the many other mythologies hinted at previously. In the segment involving a fallen capitalist we see possibly the finest standalone chapter, and in the segment involving the Candid Creative Collective we see Rasheed getting carefully preachy where regards overlaps of art and spirituality. We also get some stone-cold solid visual storytelling, and some of Rasheed’s best inking to date. His inks alone outclass 99% of the comics on the stands today.


And now it is all over. If this series is new to you, know that print and digital copies are available via his website and blog. If you’re interested in a starkly original epic, uniting an all-encompassing origin of the world with other planes of existence and family issues and clandestine orders and sexy demon princesses and 1960s revolutionaries and so, so much more, Monsters 101 is it. Many indie creators itch for the chance to tackle bigger properties, but I honestly cannot think of a single Marvel or DC title that is worthy of Rasheed’s exceeding talents. I do know he has many more stories in the works, some that will touch upon themes and characters we have seen before in this megalithic series, but even still, knowing that a Book Eleven will never magically appear in my inbox is a horrible, horrible thing to acknowledge. There have been times when I wanted to renege on reviewing comics altogether, but a new Monsters 101 would quickly undo that decision. If you want true imagination rendered in utmost quality, I personally invite you to see for yourself why. Don’t let the cartoony visuals dissuade you. That’s just the candy coating, as Rasheed has unleashed just the right medicine the godforsaken comic book industry has been yelling for decades for.