Mythology of the Colonizer

Muhammad Rasheed - Why does the painfully unconvincing "pharaoh" look like his name is "Harvey Tinkleman" or something similar...?

Hugh Murris - While we have no data on mummies 2500 bc at the time of the pyramids, per max plank institute, dna from egyptian mummies from about 1388 bce forward shows that though technically african, ancient egyptians, at least those wealthy enough to afford mummification, weren't black at all, but a mixture of eastern Mediterranean, turkish and even eurpopean. Egypt didn’t become ‘black’ till about 1500 years ago. So, just an fyi: while Africa does have a stellar history and it’s ensuing accomplishments are indisputable, african doesn’t always equate to black.

Muhammad Rasheed - I'm sorry, but posting obscenely biased, eurocentric posts slanted in ways that have already been debunked numerous times by far more credible (though unsung) scholars will never, ever impress me, Hugh. Nothing in your third reich-ish post represents truth, but only efforts to protect your precious White Supremacist Ideology that has not a leg to stand on, despite these jokers' posturing to the contrary. 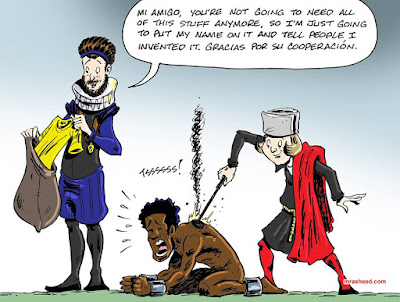 Hugh Murris - 'The Max Planck Society has a world-leading reputation as a science and technology research organization. Additionally, Max Planck Institutes were involved in roughly 2,500 international research projects with more than 5,000 partners in over 100 countries around the world in 2016.' Repeat after me, Wakanda isn't real and black panther is just a comic book.

Muhammad Rasheed - Stop sipping that kool-aid, bud. It doesn't have enough flavor in it anyway.

Hugh Murris - If that is your take on western science and medicine next time you're injured or ill visit a traditional witch doctor.

Muhammad Rasheed - You're still going, huh? Literally nothing you believe about this topic is true. I do not subscribe to your Eurocentric propaganda white supremacist fantasy, Hugh. You're babbling at me.

Hugh Murris - Babbling would be vocalizing. iam writing, and if you can read it and respond, then you are utilizing western education, ie: reading and writing, which until contact with euros and arabs was non existent in most of Africa.

Muhammad Rasheed - Your white supremacist propaganda message saying that white people invented everything worthwhile does not align to reality, Hugh. It's only the myth the white racist aristocracy tell themselves as motivation to stay on code so you can hold onto your ill-gotten monopoly of wealth & power by your legendary, gun-wielding selfish barbarity.

Please step outside of your twisted Whitopian bubble and learn real stuff to fill your abysmal knowledge void. Thanks.

Whites didn't invent the concept of slavery, but you certainly invented the concept of permanently delegating a "peculiar" form of chattel slavery upon a people aligned to racial phenotype. That's the concept your white racist aristocracy is built upon, remember? You invented that, atheistic humanism materialism, maybe mass indoctrination/brainwashing, and you perfected the crony corporatism model of 'business exploitation.'

Hugh Murris - Short attention span much? see your cartoon above where YOU claim white folk stole all the good African inventions. and the only reason black slaves were so popular was the drive thru convenience of the African slave trade. White folks didn't even have to leave their ships. Africans just brought the slaves right to them. There must have been some real hatred going on over there in Africa for them to exile 12 to 15 million of their own neighbors. wow and I thought white folk were supposed to be the evil ones.

Muhammad Rasheed - More white supremacist myths being presented as truths, huh? What do you walk around with a bag full of this pap?

The documented facts of history reveal that savage conquering whites stole everything they could get their hands on in Africa and sent it back to Europe, with each nation desperately trying to be the first to decode the sciences so they could claim to have 'invented' them. The rivalry between Newton vs Leibniz arguing which of the two REALLY "invented" calculus being the perfect case in point. Keep your myths, Hugh, as I have no use for them.

In the beginning, the African traders did as you described, since the whole world engaged in the slave practice. But once the crony corporatism machine began, led by the Dutch and Portuguese, creating unprecedented obscene profits, the game changed. Drooling and wild-eyed with greed, the European slavers seized any and every Black body they saw, former business partners or not, and the natives quickly learned to stay away from the coasts altogether. The Euro-traders were forced to adapt to the new situation, and began a new scheme in which they would leave barrels of rum at the edge of villages, and attack at night when the inhabitants were inebriated. This became the normal model for slave taking, despite the myth you enjoy spreading to cover your evil.

Hugh Murris - I think we had this discussion once before, but just to refresh your memory and remind you that this was not some white supremacy plot to annilate the black man. Here goes again: 'The Civil Rights Congress of Nigeria has written to tribal chiefs saying: "We cannot continue to blame the white men, as Africans, particularly the traditional rulers, are not blameless." In 1998 'Yoweri Museveni, the president of Uganda, told an audience: "African chiefs were the ones waging war on each other and capturing their own people and selling them. If anyone should apologize it should be the African chiefs.' Professor HL Gates has asserted that 90% of black slaves were captured by other africans and the trans atlantic slave trade would have been impossible without overwhelming complicity on the part of africans.' But you can call these actual africans white supremacists if you want, but you will be in error.

Muhammad Rasheed - Hugh wrote: "I think we had this discussion once before..."

We've met before? Where?

Don't bother. I'm not African, I'm a Black American Descendant of Slavery (ADOS) with my own mind. As you may be able to tell from this thread, I'm not one for listening to the claptrap produced by either dedicated Eurocentrics nor their African lackeys. The nonsense 'decrees' of mentally enslaved cowards & fools means no more to me than any other mess you've typed thus far. At this point I'm waiting on you to catch the hint and sell your snake oils elsewhere. I am not interested.