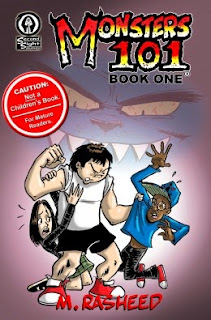 03 April 2012
Monsters 101, Book One
"From Bully to Monster"
Created, written and illustrated
by M. Rasheed


the three cents:
This debut of a ten-part graphic novel series opens the story of Willy Pugg, the biggest and baddest bully at Tanglewood Middle School. Every stereotype the concept of "bully" calls to mind Pugg is indeed guilty of, and worse. From beating up his fellow students to freely disrespecting his elders, Pugg is seen by all as a little monster...until he encounters the real deal. Rasheed's story here goes from Pugg the young rapscallion to a transformation that might make even Franz Kafka blush a little. Rasheed tells a very easy to follow tale, with a breezy narrative that shows you who Pugg really is through his interactions with a number of very different characters, contrasting personalities and all. The basic premise is also very smartly considered, with a nice effort at character development which I can only presume increases thusly as the rest of the series unfolds. This is absolutely a fun read, with more than enough originality to maintain the interest of anyone who gives it a chance. It should be noted though, that Rasheed's story and art in combination are a bit sneaky. While the art has a nice black and white illustrative style, maybe more than a little on the cartoony side, the story itself is at times every bit as dark as the great (and innuendo-entrenched) Where The Wild Things Are- a book that may well have inspired Rasheed to some small degree. As with many bullies in the real world, there are generally reasons why they act out the way they do, and Pugg is certainly no different in that respect. Pugg is quite dumb and inconsiderate and an overgrown thug, sure; but he is an interesting character nonetheless. The art is comfortable and growingly confident. The monsters shown are very imaginative. And, there really are stretches where the brushy style fools you into thinking the tale you're reading is more innocent than it is, but then some poor kid is ripped in two by something big and scary and drooling and hungry. Like a one-two punch that keeps you turning the pages. Obviously this isn't the artist trying to pervert the minds of impressionable youth, as younger readers really shouldn't be reading this to begin with. I think it's more in keeping with the idea that, as with any interpersonal relationship, the lives of children can be much more complicated than they may at first seem. Additionally, as of this review I understand he is hard at work on Book Seven. Along the way Rasheed has stayed busy with a number of projects, from commercial art to several web-comics to even authoring some "proper" non-comic books. But, Monsters 101 is what he keeps coming back to. If a work can so entrance its creator, then I like to think that such passion shows through in the final product. While this may not be for everyone, this is a very intriguing setup that I personally wouldn't mind exploring more. Very fun stuff.