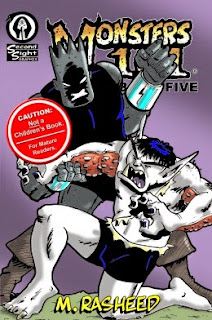 
the three cents:
Big-time revelations in this issue, starting with Mort and Pugroff's old principal in the first chapter. With bully turned monster turned hero Pugroff now in possession of something everybody else seems to desperately want for themselves, fellow monsters Maescus, Lodeth, Porgram, Benkom and Heddark have all joined up with our young heroes. Which is good, as the dark dragon Azoratain resurrects Pugroff's old hall monitor nemesis Cliff for a rough powerplay. And then the tenth level monster king Ulam lines himself up to take on Pugroff once and for all...with the victor getting the throne to the realm of monsters. Monsters 101 is to be a ten book series mind you, with each ish roughly 150 pages. Reading this marks the halfway point. The ground covered thus far has been a fun ride, and Rasheed's ability to tie every single aspect together continuously is part of the fun. He forgets nothing. One small complaint with the story here though, is that as soon as Ulam and Pugroff agree to battle, Mort disappears to go play shaman. I suppose focusing on advancing his own interests is realistic for most people, especially where regards the selfishness of youth in general; but Pugroff had just saved Mort's life from Ulam. Sure their friendship has been a rocky road, but neither one really has anyone else to share all of the craziness they have been experiencing. Another possibility is Mort's desire to increase his effectiveness, as in fights thus far he's proven to be as useful as, well, a kid. But it really didn't come off that way. The art gets better and better, incorporating very illustrative approaches to the scenes, even in the many violent bits. Such fantastical beings are shown to exhibit their abilities quite well, without it ever coming off as too cartoony. While the covers are brightly colored, the interiors continue to be black and white, which I think actually adds a little more depth to the more surreal aspects in many of the images and setups. Actually, the covers may be false advertising, as the contents tend to address subject matters far, far darker. Pugroff turning bully-killer is classic, for those who've read along in the series. He really has evolved about face. And it does kinda make sense that a badass bully would become an extra special monster of monsters. And the monster part is never downplayed. Pugroff killed back when he was still human, young as he is- something that is acknowledged finally with this issue's story. Compelling narrative and human characters- even the monsters- make for damn good funny book, especially when you throw in well-enlivened humor and shades of spirituality. Anybody not reading Monsters 101 is completely missing out on something truly special.