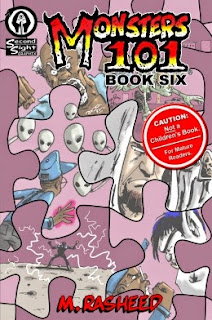 
the three cents:
In this latest issue of the Monsters 101 graphic novel series, we have several new plot threads building all at once, from the introduction of a dangerous new human turned way-more-than-human villain to a humorously morbid side story that would greatly appeal to fans of the Goon comics from Eric Powell, to Mort coming closer in his quest to find the Golden Order of the Encircled Serpent. Pugroff is king of the monsters, officially, and Mort is advancing startlingly well on his mystical journey. Rasheed's plot structuring changes here though, I think, with the individual sub-chapters becoming less clearly continuous in execution, though obviously still relating from one to the next. These feel more like collected stories than did previous issues, as opposed to mammoth-sized ones, and this actually works well for expanding more individualistic character developments, as each chapter can stray more liberally. There was an especially great segment in the middle full of Ditko-styled sorcerous action, and dark plot thread unravelings straight out of Lovecraft. This includes some pretty incriminating insinuations for the future of Pugroff. The book ends on an almost abrupt point, following something quite dramatic that had been building among certain characters since day one. There will likely be intense ramifications from this, intense ramifications from much of what transpires in this issue. The art is mayhaps the darkest yet, as gruesome fighting between subhuman creatures is sure to demand. Rasheed proves himself time and again in his ability to draw any setting that the truly imaginative story calls for, from urban and small town city streets to alien landscapes to monsters right out of your own childhood nightmares to crazy super-powered folks to little kids eating candy bars to normal adults having very racially-charged arguments. Expanding on that, I am beginning to wonder if a subversive meme to this series is to entail that all creatures great and small, all are monsters in their own way. Another damn better than good issue, and with number seven nearing release, I am honestly saddened that the series will conclude later this year with number ten. Anyone following Monsters 101 would be. At approximately 150 pages per ish, this is a ton of story, and it's an original and compelling story at that, loaded with realistic character growth and scary, scary monsters. Go to Rasheed's blog or website for information on how to stock yourself on a comic that is worth light-years more than Diamond Steve Geppi's value system.