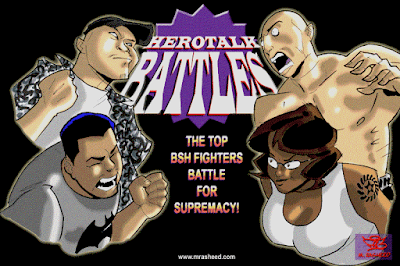 Back in the day, I made a caricature sequential tale of some of my online friends over at the Museum of Black Superheroes HeroTalk message boards, battling each other in a parody of the old Street Fighter II game.
The idea for the mock cover illustration was inspired by the fact that usually the covers to games have a different illustrator than the actual game play designer (at least back in those days) so I had cartoonist extraordinaire Charlie 'Fab' Goubile do the pencils/inks and I just colored it and added the wording. I was very moved that he agreed to indulge me in this goofy request. Fab is cool people.

I got the idea for the player select screen later on after I was well into this project, which began angry. I had got into yet another argument with my old friend Brian Colding and decided to make fun of him in a series of caricatures. I think my position was that Mr. T was actually a real life tough guy who would have beat Brian up, despite his lifetime of martial arts training and his own stint as a night club bouncer. Or maybe my actual position was that Mr. T had let himself go after the Rocky III role and that he wasn't all that tough anymore...? I no longer remember exactly what I was arguing at the time (probably the latter since I actually had him beat up Mr. T), but anyway, me and Brian were going at it (he's since decided he's had enough of my shit and cut me off completely; I haven't talked to him in years; that's what I get for taking people for granted, I reckon).
That's how the project started... MAD!! ...but it got good to me as I started to map out who was going to fight who next in the logical sequence -- based on regular message board beefs and old dramas, etc. -- and then I was no longer angry with Brian. I even went back and fixed some of the original drawings I'd made so he woudn't hate the whole thing after it was done. lol
For some reason I didn't use the board members' actual message board handles, but just used nicknames they  had for each other, alias names we used inside of Writing Challenge stories, or I even made up names for the faux-game caricatures based on their personalities and online personas, et cetera. This caused some consistency conflicts later on in other projects that evolved from this, that I quickly grew to regret.

I wasn't deliberately trying to diss JC2.0 with this last fight, despite the impression this may give. I was posting these on the boards as a serial, with one completed fight at a time, using the "New Challenger!" and the versus fight card graphics to build suspense. JC2.0 was pestering me the whole tine to add him into it, but I had already mapped out how the fight narrative was going to go from the beginning, based on the well known board beefs and melodramas we were all gossiping about. As far as I knew, JC2.0 had never been a part of any of that mess, so I had nowhere to actually stick him that made sense to me except to obviously just tack him onto the end. Unfortunately for him, the last fighter was greyrevealed, in his cosmic-level super vampire persona. lol But I recognized that JC2.0 didn't want to be left out of the BSH mini-event that this had turned into, and I didn't want to hurt him by leaving him out altogether. I was pleased that he and the rest of the gang were enjoying it.
During the time I was drawing this, we got word that Mshindo I., the Natural Mystic, had hurt himself somehow at a library demonstration event, something having to do with a footstool. Since that news was still current at the time, naturally I had to tease him over it. I was careful to have the elder that he respected to deliver the blow during the fight instead of one of the guys, because I didn't want to end up chasing away from the boards the most highly regarded top contributor and have everybody be mad at me.
Also this story was the debut of my interpretation of my brother's single raccoon boot, referencing his infamous autobiographical short story. lol I know this thing is absolutely pregnant with a bunch of other inside gags and my own goofy amusements from the old BSH crew, so feel free to just ask whatever you'd like clarity on in the comments below.
A couple of years later I saw URAEUS and my brother bickering over something or another, and I teased a sequel to this project by making this:

It caused a mild hoopla, but I was just kidding. lol Maybe next time.