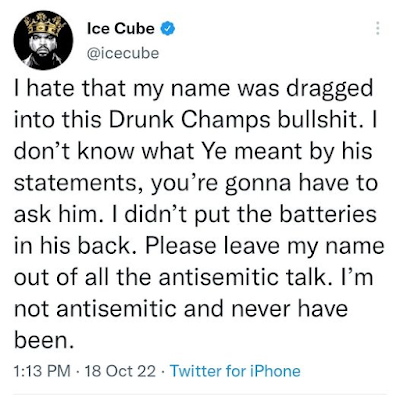 Real recognizes NOT real, as well.

June Alexander - I don’t understand what’s going on. Ye was fine when he was talking about Black people. Why did the energy change because the subject of his conversation shifted?

Muhammad Rasheed - @June... Because the Jewish community used the Black & Jewish Alliance of the Civil Rights Era to become a political protected class to get reparations for Holocaust survivors & their descendants from the US gov as well as special antiracism rights. We cannot criticize them because they are protected.

The Black American ethnic group has not attained such privileges.
June Alexander - We can criticize them- people are just scared to tell the truth.
Muhammad Rasheed - The danger of losing their livelihood is real.
June Alexander - And therein lies one of the biggest problems in our community, We rely on others to "give us jobs," that we base our livelihood on. If we valued ourselves more, we wouldn't sell our everything to them for such low payments. They literally base industries off of US.
Muhammad Rasheed - In our community, we spend a lot of time sucking up to white gaze hoping to get in good with the paymasters, so we are unlikely to be caught making anti-semitic statements. Our rivals do it because they are trying to actively compete with the Jewish community and tempers flare high and people end up getting sued and/or cancelled.
Our group is the uncrowned true protected class of the USA and we should be unifying as a political group (I suggest under #ADOS) to capture for ourselves the expanded economic included model of what the Jewish community have.
englishmen7 - what do you think of Israel and Palestine?
Muhammad Rasheed - What does that have to do with this? lol
englishmen7 - nothing really, I was just asking a question and since the post is about Jews.
Muhammad Rasheed - The post is about the so-called "Black & Jewish Alliance" of the Civil Rights Era and its outcome.
But thanks for trying to force the point into a completely different direction for some mysterious reason. Were you auditioning to star in one of my cartoons?
englishmen7 - no not at all, I was just asking a question. I never meant any offense by my question and I'm sorry if I offended anyone. my reasons for asking the question was just out of curiosity.
Muhammad Rasheed - Here's some excellent resources on the Palestinian-Israeli conflict I found several years ago that's my personal final word on the topic. I found it interesting & useful before I narrowed my focus to my own people's antiracism struggle.

Against Our Better Judgment: The hidden history of how the U.S. was used to create Israel by Alison Weir

If Americans Knew: What every American needs to know about Israel-Palestine
See Also:
Modern Headlines Trigger a Trip Down Memory Lane
The Second Most Often Used WhatAboutism Fallacy