The Truth Behind the 'Love Thy Enemy' Doctrine 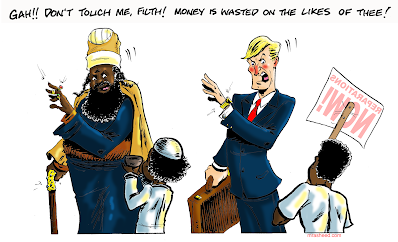 CITATION
Rasheed, Muhammad. "The Truth Behind the 'Love Thy Enemy' Doctrine." Cartoon. The Official Website of Cartoonist M. Rasheed 07 Oct 2017. Pen & ink w/Adobe Photoshop color.
Muhammad Rasheed - I believe in the "love thy enemy" concept, but I recognize it was never designed as a universally applied principle per its scriptural context. The Christ Jesus, son of Mary (peace be upon him) was sent with a very specific message to a very specific people: The children of Israel. This was a people who already knew the Word of God, who had already been instructed in scripture, but their practical application of its precepts had devolved into a cold, legalistic religion devoid of the reflected mercy and compassion of that scripture's Divine Author. As is usually the case in a system in which a powerful wealthy elite rule over the common masses, it was the least powerful of society who received the brunt hateful coldness of all legalistic decisions. The lessening of mercy always flows top-down, you see. So when Jesus said to "love thy enemy," he wasn't talking to the people who were getting stoned, but to the self-righteous jackasses doing the stoning, as his admonishments were often directed towards the more powerful in society. He told them to 'turn the other cheek' when they felt a slight which came with forgiving the poor of their debts, forgiving the starving when they were forced to steal bread, forgiving those who in having a harder time in life were more likely to violate societal laws. It was difficult for his people to love the lower classes, because the wealthy & powerful are often aloof and hard-hearted to those they feel themselves better than, and it was to the rich among the children of Israel whom the Christ was sent to deliver his instruction.

"Love thy enemy" was never designed as a universal principle applicable to everyone, but it does have a clear application in the modern Western society. The dominant, powerful class of our day have proven scientifically incapable of feeling empathy towards groups they also hold in disdain, as undeserving of the material blessing that the rich hoard from them and treat as their enemies. To those wealthy and powerful who claim Western Christianity as their doctrine, even as they wage class warfare against the poor minorities, they should know that Jesus' instruction to "love thy enemy" was directed specifically towards them and their ilk.

Melody Winfield - I disagree Muhammad Rasheed. IT IS a universal principle. applicable to everyone e. Jesus wasn't wealthy and he nit only told people what to do, he did it himself. His disciples weren't wealthy either. And he taught them the same principles which they were commissioned to teach. No one is exempt!

Muhammad Rasheed - The Christ was wealthy. Was he not gifted with Frankincense, Myrrh and Gold for his mission? His wealth was for the people, as he personally preferred the selfless life of the ascetic. Wasn't the Christ the same messenger who explained to you the parable of the three stewards with the talents? Recall to mind that the most successful in stewardship was the one who cultivated and invested into the talent until it doubled and tripled in value. Of all people, do you think the Christ Jesus, son of Mary would have been one to instruct the people in wisdom that he did not practice himself? Also as you may recall, one of Jesus' miracles was that he was allowed a high-level precociousness from as early as the cradle, from which he directed the people to attend his affairs. This to prevent the greedy and desperate from devouring the gifts of the Magi, so that when he was finally ready for his mission of prophethood, he would have what he needed to bless those he was anointed to bless. The Christ had money. Be ye not of those who doubt.

The "love thy neighbor" doctrine can be applied universally by anyone who is wise, but it was preached to a very specific people, by a very specific messenger, for a very specific reason. Preached to a people who were told that it would be easier for a camel to pass through the eye of a needle than for their selfish, hardened hearts to reach paradise. A people who, even if they had kept the Commandments their whole lives, still needed to give up all their wealth in order to prove they loved the promised next life of unseen spirit more than the material.