Delusions of the Conscious 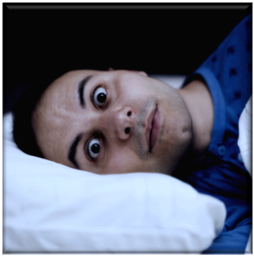 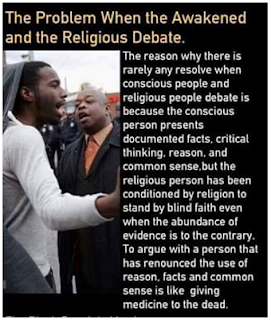 Digga Smith - Sound about right to me..

Steven Slink Everett - I do this at work with church folks all day...and end it with you can believe what u want to believe...but here some facts for ya though

Jim Dyar - eh. for most people. i find that religion is the one thing that has kept my dark side in check. better for everyone that way

Muhammad Rasheed - In my experience, it's the people who are so SURE that religion/spirit/God are fiction who do all of the ducking, intellectual dishonesty, and blind faith assertions. They appear to hate logic/reason actually, and see only the narrow-minded box of their Godless pet ideologies.

Clifton Hatchett - Typically it's my experience that the faithful condemn you as a Godless heathen if you do not subscribe to a specified ideology.
It's as though a self-righteous piety envelopes the mentality of the devotee.

Muhammad Rasheed - lol The whole point of the meme is condemnation of the religious because they won't accept the narrow-minded and skewed versions of logic & reason proselytized by the so-called "conscious."

Muhammad Rasheed - How is posting this meme not an act of self-righteous condemnation from the POV of a specified (the "conscious" movement) ideology?

In fact, it seems like the true reason there is no resolve when the two opposing groups butt heads, is because the "conscious" can't recognize their own hypocrisy and double-talk. O_O

Digga Smith - I think it goes both ways as far as the hypocrisy when the 2 talk..neither of the other wants to listen fareal or "believe" the other's ideology or faith..

Clifton Hatchett - So that's what you got for this morning?
"You too."
Com'on man.
Typically it's my GOD, my Prophet, and that's it.
Pascal's wager.

How is it not an act of self righteousness?
When it's an honest observation.

Muhammad Rasheed - I believe in all the prophets. It's a major Pillar of my faith. I don't believe in the concept of "my God versus your God," since there is only One God. My God and your God are One.

By definition, self-righteousness is a feeling or display that one's beliefs or actions are better than the average person, and that very concept is dripping in that meme... especially since the very term "conscious" defines the concept even more than "the faithful." lol

"Honesty" when demonstrated by a subjective mindset, doesn't represent "truth." It represents tacky bluntness with no filter. Truth is objective. A self-blind hypocrite -- the inability to see oneself demonstrate the very traits one condemns in others -- will never be able to speak a useful objective truth.

Clifton Hatchett - "My GOD, and your GOD are One."
Excellent.
Is this thought synonymous with your faith, or is this your personal view?

Muhammad Rasheed - lol Both. That's why I believe it, crazy.

Clifton Hatchett - A reference for people to see?
ONE GOD?

Muhammad Rasheed - What do you mean? You want the verse quote citation address?

The Holy Qur'an 29:46-49
And dispute ye not with the People of the Book, except with means better than mere disputation, unless it be with those of them who inflict wrong and injury: but say, "We believe in the revelation which has come down to us and in that which came down to you; Our Allah and your Allah is one; and it is to Him we bow in Islam."
And thus it is that We have sent down the Book to thee. So the People of the Book believe therein, as also do some of these pagan Arabs: and none but Unbelievers reject our signs.
And thou wast not able to recite a Book before this Book came, nor art thou able to transcribe it with thy right hand: In that case, indeed, would the talkers of vanities have doubted.
Nay, here are Signs self-evident in the hearts of those endowed with knowledge: and none but the unjust reject Our Signs. 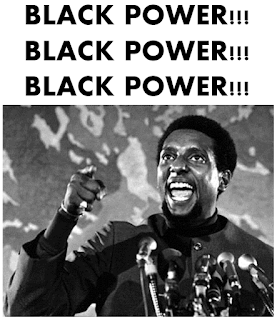