Creating From the Right Side of History 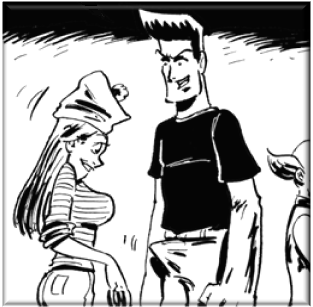 Inspired by Brandon Easton’s Eisner Awards nomination last year, I decided to submit my own original works for the 2016 contest. Over a year of building excitement heralded the eventual disappointment I felt this morning when I discovered that the first 6 of 10 titles of my Tales of Sinanju: The Destroyer graphic novel series didn’t make the nominees cut.

I’m proud of my story, developed from the love of a True Fan’s sensibility, in the mode of skilled writing talents like Kurt Busiek and Alan Davis. Readers appreciated that I was able to capture the essence of the mainstream pulp fiction novel series and its main characters, as was my goal. “This should be the guy to write the new movie screenplay!” one Amazon reviewer remarked and I liked that, too. lol  A True Fan’s sensibilities certainly weren’t used during past efforts to translate the property into different mediums, with it often falling victim to the infamous corporate executive meddling into the creative process that genre works are traditionally abused by. But now is a different day! Today the most successful movies took the fans of the translated properties VERY seriously, which really validated the decades-long fanboy grumblings.

In addition to this, I also brought my own sensibilities as an African-American to my story. Since the novel series has always be written from the Caucasian-American point of view, there were many times when I frowned reading the author’s treatment of my people between the pages. My graphic novels presented an opportunity to calibrate the Destroyer-verse’s racial dynamic to a more balanced center. Racism is EVIL, and the only people who should engage in it at all in this story are the bad guys. Some can argue that Master Chiun has shown racist traits within the mainstream novels, but that was clever projection from the authors that made little sense from the storyverse’s perspective. ‘Racism’ as we know it is a Western world invention, birthed from the unprecedented practice of delegating a specific racial group to permanent chattel status. Someone like Chiun would have no reason to be racist; his prejudices would be ethnic group and national origin based, not physical racial group based. The House of Sinanju has worked for powerful empires throughout history, and all over the world – seen world leaders of literally every skin tone. His character would know above all others that “race” doesn’t mean anything, and I've always found it unbelievable that he would continuously harp on Remo’s “whiteness.” I left that out of my books, and instead had Chiun zero in on Remo’s Western-American birth for his teasing.

Of course the ghost writers on the series didn’t echo that opinion, with one in particular going so far as to turn me off of the mainstream books altogether. The character Harold W. Smith is a WW2 era, former OSS/CIA agent, and occasionally the original writers would have him come from behind his desk and kick butt himself out in the field. Tapping into their influences from characters like Steve McQueen or Clint Eastwood, those scenes with Smith would be great good fun! Full of old school macho swagger, and no-nonsense, tough guy stuff from ’60s-70s action films, it fit in with the Men’s Adventure tradition and worked well. Unfortunately this ghost writer didn’t do any of that. He had Dr. Smith frightened and confused as he confronted a group of Black youth, and proceeded to slaughter them all with his revolver. The scene was a projection of all of the “black thug” paranoia directly responsible for the abuse and deaths of unarmed Black people in the news today. I was FURIOUS, and couldn’t bring myself to pick up another novel. What I DID do was seek to address the issue in my comics, depicting my people where they weren’t evil and worthy of being killed in the streets just because they were Black and poor.


I felt that all my decisions actively improved the Destroyer Universe. As a fan myself, it deserved better than being allowed to become a sounding board for ignorant intolerance and a hateful mindset. Other groups were reading it, too, so why deliberately slight them by sounding like an anti-minority propaganda piece? All of this made me proud of my story, and I talked about it with friends and family enthusiastically. I felt it was a no-brainer I would get nominated for SOMETHING! But then I saw the 2016 Eisner Awards nomination list this morning, beginning with this line:


“The biggest news this year is that 49 women have received a record 61 nominations (compared to 44 last year) and are represented in 27 of the 30 categories.”

That made me pause; took me aback. Instantly I realized that there was no way my six books would get the nod. The members of the Eisner Awards committee were on the right side of history, and ruled from such. For all my personal pride in having carefully excised the vile racism tumor, I deliberately left another one in... one that’s a far worse evil. Misogyny.

The Masters of Sinanju are men trained in a super martial art that makes them kickass better than anyone else on earth. It also makes them irresistible to women, and of course the perfect heterosexual male fantasy projection tools for the readership. “Men’s Adventure!” was the technical category on the book shelves, and the stories featured all that the title may imply. In my books, I refused to allow them to take on the ‘between-the-lines’ true title of “White Men’s Adventure!” that mainstream genre books traditionally fed, but I failed to consider my other sensibilities as an African-American MALE.

I told myself that I significantly softened the misogyny part of the story because, even though I did have women treating Remo Williams like he was God’s Gift to the gender, that because I didn’t show him having hot, sloppy, buck-naked, uncensored sex with them like the mainstream novels would often graphically describe, that my stories were somehow more progressive. That’s literally what I’d been brainwashing myself with all these months, that my books were healthier and better for the woman’s rights movements because I had left out the graphic sex scenes. Meanwhile I actually thought I would have a shot at getting nominated, when I saw the percentage of males in the judges’ box. I was NOT operating from the right side of history, but living and breathing the foulest part of the Men’s Adventure spirit I was channeling to write my tales.

When I saw that line about the record number of women nominees on the Eisner Award page, I felt a tinge of guilt that I even submitted them in the first place, which meant, that my conscience knew better. I love my story, and will always be a True Fan of the property, I just no longer believe that we should be rewarded for creating beloved tributes to properties that hold concepts within them that represent the worst aspects of our society – aspects that NEED to be left in the past to die, and reexamined only as lessons to learn from, not resurrect. I shouldn’t have written the misogyny scenes into the story in the first place, and should've thought about the potential psychic damage as carefully as I thought out the removal of the racism aspect.  Now that I am confronted with the stench of having deliberately overridden my conscience to put them in there, I genuinely regret not doing so, and will withdraw from other contests I've entered as well (When researching the judges for this year's ECBACC, I noticed that one of them has me blocked on Facebook!  I have no active memory of arguing with her, and certainly not over anything feminist since that group isn't my enemy, but I suspect it may be a residual blocking as support for a different opponent she may have felt I disrespected.  Who knows...?).

The bottom line is that I shouldn't have been lazy, and took the time to solve the problem of how to allow Sinanju to super-charge Remo's pheromones, but without taking away the women's dignity as they expressed themselves as sexual beings.  Instead of defaulting to Male Sexual Fantasy Template #2 or whatever.  I am not changing my books; I'll let them stand as a memorial to the Death of the Old in my own personal character, and do my best to do better now that I know better moving forward as a responsible genre creator.
Posted by M. Rasheed at 4:24 AM