SUBSCRIBE TODAY! to a Video Channel by M. Rasheed 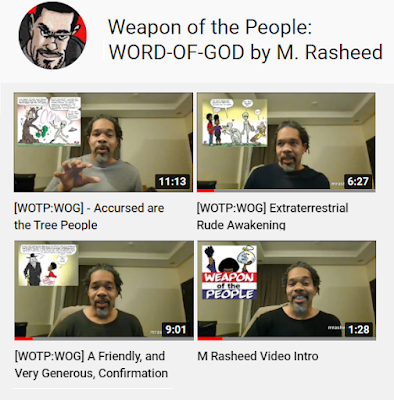 Muhammad Rasheed is a cartoonist, socio-political analyst and ‘artivist’ whose research interests include anti-racism and the pro-Reparations struggles of the Black American former slave class ethnic group. He is an advocate for the USA's competitive, free open market capitalist tradition with the necessary strict enforcement of antitrust law to protect it from the 1% monopolist grifter class.

M. Rasheed’s recent artivism effort is Weapon of the People: DECODED, a Gag-A-Day political cartoon venture launched on 09 Apr 2018. His video channel clips explain key concepts that he has cartooned—the official "word of god" trope answer for what his cartoons are supposed to mean despite what anyone else's interpretations may claim—and he looks forward to the comment discussions!
______________
"Word of God" - A statement from someone considered to be the ultimate authority, such as the writer, director or producer; canon that comes not from the source material but from pronouncements by the creator ~tvtropes/WordOfGod
Posted by M. Rasheed at 12:19 PM