NBC News - California is the first state to adopt a law paving the way for Black residents and descendants of slaves to receive reparation payments.

DAvraham818 - I'm Jewish. Can I petition, the descendants of Egyptians, Babylonians, Persians, Greeks, Romans, Europeans, Arab nations and practically everyone else for reparations?

Muhammad Rasheed - Much of this would appear to be a false equivalency fallacy. The Black American former slave class (ADOS) is demanding our Reparations from the exact same US government that was complicit in our centuries old oppression up into the modern day.

If your mention of Egypt is referencing the Torah's Exodus event, can you honestly say that is the same government that exists in that land right now? These are two completely different legal entities, which the current Egyptian gov having zero to do with that Pharoah's wrong.

The same is true of the Babylonians. The actual government that was at fault is long extinct. There is no realistic claim there.

The Persians are modern Iran, and after all of the over-aggressive foreign interventionalism by Western powers in that region, we can realistically cast aside the idea that this is the same government from of olde. The current state of Israel is actively trying to pressure the USA to destroy Iran, so I'm sure the billions & billions in sanctions imposed upon them should absolutely count as "reparations" paid-in-full for wrongs both real & imagined. More would only be a genocidal overkill.

Re: The Arab nations, I would think the destruction Israel caused against them during the Six-Day War (1967) would have settled all accounts. Reparations for what?

Ionlyspeakthe15 - do you mean the same government that freed the slaves, fought the Civil War, passed the civil rights and the voting rights act, forced affirmative action on everyone, and has approximately 40% of African Americans on some form of government assistance? that same government?

Muhammad Rasheed - I mean the colluding cartels of greedy white men—forming a 1% criminal overclass who've usurped the US gov—who had the president assassinated, gave the country over to the confederates, repealed Reconstruction, made my people a wealthless bottom caste, and gave whites the New Deal and every opportunity, while exploiting #ADOS.

e_muench - You keep your hairy, greasy hands out of my wallet.

Muhammad Rasheed - Congress will pay the Reparations debt program with the fiat credit out of the Federal Reserve system, so you'll get to keep all of the stolen Black American generational legacy wealth and land you lot hoarded after your never-ending racist terror campaigns. Don't worry about it.

But if you try stealing it from us again then we'll have a problem. Stand down and let your precious systemic racist theft die, bud. Let the country finally be truly great.
SaziYuri - You're a moron. 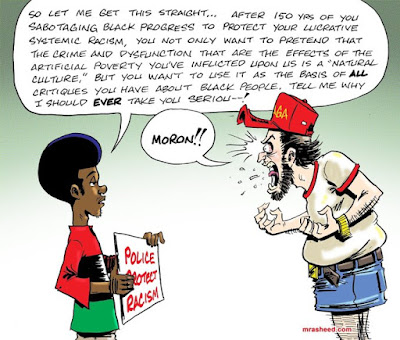 Muhammad Rasheed - The only "race card" I see is the white supremacist one, with your people continuing to hoard the benefits of industry and government for yourselves by force. When the people protest you call them morons in a tantrum.

For the record, I am not a subscriber to your demographic; I don't believe what you believe. Your glossary of white racist terms doesn't mean anything to me.