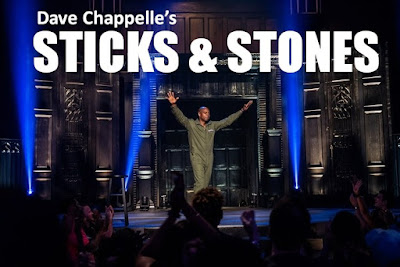 Muhammad Rasheed - No, I don’t think he went too far. We need to have that Candid & Courageous Conversation on every topic Dave touched upon. Here’s my takeaway bullets from his show:


Jennifer Gary - I’ve always loved Chapelle, even his more controversial stuff. But I took offense to his attack on Michael Jackson’s accusers… saying “I don’t believe those m*fers” then completely copping out with “Even if he did do it??….. (stupid look) …. You know what I mean???? I mean, it’s Michael Jackson!” Dave just seemed like a biased drone at that point. “I mean, it’s Dave Chappelle! He smarter than that.”

Jahvarius Kendrick - But Dave has made jokes about 15 year old girls that have been kidnapped. Surely you would know he would make a joke about this too. Also if you can laugh at those jokes, surely you can laugh at these. If you weren't laughing at either I understand but many people were laughing at both of those scenarios eventhough they were both messed up.

Jennifer Gary - Well, I have a bias in that I watched the special on MJ and I have treated survivors of chronic molestation and sexual abuse. When I watched it, all the fibers of my being indicated those guys were telling the truth. So when one of my idols says that he doesn’t believe “those mf’ers” and doesn’t offer anything other than a shrug, it’s hard for me to swallow. At that point, Dave seemed totally biased as there was no supporting data, no satire, no joke, no politically astute commentary. I still can’t believe how much of a cop out that was. I mean, if you are going to question the validity of the reports of two chronically suicidal men on an international stage, you should have something to back it up, or it is completely frivolous.

Muhammad Rasheed - Jennifer wrote: “…all the fibers of my being indicated those guys were telling the truth.”

Here: Just Asking's answer to Do you agree with Dave Chappelle in Sticks & Stones when he said he doesn't believe Michael Jackson's accusers? Or do you believe the men?

Jennifer wrote: “…you should have something to back it up…”

Like the “fibers of being?” smdh He’s a comedian doing a shock value joke and using that same level of research into the matter as your “being fibers.” His gut told him they were lying, which proved it more accurate than yours.

Jennifer Gary - Lol okay, maybe I should have said “clinical intuition” Either way, I think I have a little more credibility in deciphering what is trauma versus what is not due to my training, experience and current work. That said, I would have listened if Dave Chappelle had some kind of evidence or logical reasoning why he didn’t believe Michael Jackson’s accusers, but he didn’t offer anything. What he said was not funny or clever or thought provoking in the least.

Muhammad Rasheed - Jennifer wrote: “…I think I have a little more credibility…”

I’ve noticed that you’ve chosen to ignore the link to Just Asking’s answer, where the list of gaping and embarrassing holes in the stories of the two accusers were revealed for all to see. Such behavior reasonably negatively affects the credibility levels of those who wish to be taken seriously.

Please note that the reason Michael Jackson won his court case isn’t because of the force of his celebrity, but because it was proven that the families of the accusers were professional grifters who preyed upon celebrities for money. Those who are aware of this fact view Just Asking’s list of accuser holes in a very specific way, while those who prefer to use the anti-MJ biased media’s unfair portrayal of Jackson to build their “fibers of being” tend to simply ignore it. This latter also reasonably negatively affects the credibility levels of those who wish to be taken seriously.

Jennifer wrote: “…but he didn’t offer anything.”

Dave is a successful stand-up comedian at the top of his game. He is literally under zero obligation to provide anything at all other than jokes. By contrast, anyone using terms like “clinical” along with “training, experience and current work” to create an aura of professionalism that requires something other than jokes to back their claim to be able to tell whether a trauma victim is telling the truth or not, will require something more substantial than intuition and magic fibers.

In this thread, you have boldly chosen to side with diabolical grifters over Michael Jackson and you don’t even seem to care. This shows you in a bad light and damages your credibility.

Jennifer wrote: “What he said was not funny or clever or thought provoking in the least.”

I found the exact opposite to be true. But I see the topic in a clearer light than you do.

Jennifer Gary - I am a neuropsychologist. What do you do for a living?

Muhammad Rasheed - Are you really going to double-down on that?

So, in your decision to now formally choose to present your credentials as a scientist in a petty checkers move, let me remind you that in this very thread you have casually dismissed the facts & truth that won the verdict for the defendant in the Michael Jackson sexual allegations trial in favor of using the unfairly anti-MJ biased tabloid sensationalism to inform your “fibers of being” and “intuition.” At BEST, intuition should supplement the foundations of facts & truth used by the scientist, yet you have proudly performed the opposite of this to join in on the immoral and unethical slander of Michael Jackson’s name, reputation and legacy.

In effect, you appear to care very little indeed for your credibility as a self-proclaimed neuropsychologist. And if you don’t care, why in the world should I care?

The Perks of Whiteness