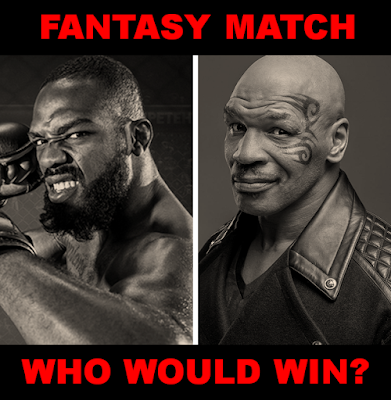 The “street fight” part doesn’t really matter. Whether it was in the ring, the Octagon or in an alley setting, both of these guys would try their best to win.  But which of the two would have the edge?

Both Jon “Bones” Jones and “Iron” Mike Tyson are gifted athletes, and when both are in their prime, fight-ready fitness state they are “bad men.” The general rule is that a bad little man (Tyson) can never defeat a bad big man (Jones), but we know from the shocking outcome of The Fight of the Century that this rule isn’t always true. There are many other very relevant factors that can give the little bad man a real shot at winning. So what do we have here?

JON “BONES” JONES
Jon has a lot more tools in his arsenal than Tyson, and can fight effectively using his long-limbs to keep his shorter opponent away which is what he has to do against Tyson. His weakness is that he does allow game opponents inside to tag him, which would be the kiss of death in a Tyson match. Would he allow his ego to let him stand and trade hands with Tyson, or would he fight the best strategy and keep Kid Dynamite at distance to finish with a take down + submission? One of Jones’ greatest strengths was demonstrated in the Belfort fight, when he powered through a potentially disastrous moment (that would have broken a lesser man) thought quick on his feet, and forced a victory with an impressive show of his champion’s heart.

“IRON” MIKE TYSON
The great advantage that a prime era Tyson would have would be his status as a professional boxer. At his peak, Tyson would have the potential ability to walk Jones down for a late KO just like Mayweather did to McGregor using his superior endurance skills alone. But that’s not how Tyson was trained to fight, and is not a strategy he’d likely entertain. Tyson was trained to take all of his risks early, to rush pass his taller opponent’s reach and bombard the head & body with lethal combos. If the taller opponent is able to effectively manage these attacks, Tyson has proven to check out of the fight and become discouraged and lethargic. This is Tyson’s great weakness, one that he’s never demonstrated the ability to overcome.

THE WINNER
I would say that Jonny “Bones” Jones would be able to solve the Tyson puzzle and score the win.