Return of the Delusional Zombie Mob


CITATION
Rasheed, Muhammad. "Return of the Delusional Zombie Mob." Cartoon. The Official Website of Cartoonist M. Rasheed 05 Jul 2021. Pen & ink w/Adobe Photoshop color.
ARTIST'S DESCRIPTION
This #MRasheedCartoons image was inspired by the ridiculous comments infesting social media about the release of comedian Bill Cosby from prison. These are, of course, the people who believe that Cosby is a rapist, despite their inability to prove this is so. The reason why he wasn't arrested before, is because none of the accusers were real -- it was a "long con" which is:

...a scam that unfolds over several days or weeks; it may involve a team of swindlers, and even props, sets, extras, costumes, and scripted lines. It aims to rob the victim of huge sums of money or valuables... [Confessions of a Confidence Man by Edward H. Smith]

Previous courts recognized the sloppy grift effort to extort Cosby of his money by pressuring him with the retarded eye of public opinion and they threw them all out. The only reason he stayed in prison as long as he did this time was due to the sophisticated social engineering methods using social media to manipulate the gullible. Everyone needs to be on guard for the 'social dilemmas' ahead.
****************
Jared Bradley, MBA - Bill Cosby, America's Dad, famous comedian, TV actor, formerly convicted rapist.

On Wednesday, June 30, the PA Supreme Court vacated his conviction and within hours he walked out of prison a free man.

Not just out of prison, a FREE man.

Cosby ADMITTED to drugging and then having sex with multiple women over decades!

And now he's a free man?

No longer a registered sex offender? Not even a convicted felon?

Has the world gone mad?

Is the PA Supreme Court corrupted?

Did Cosby use his wealth to buy his way out? 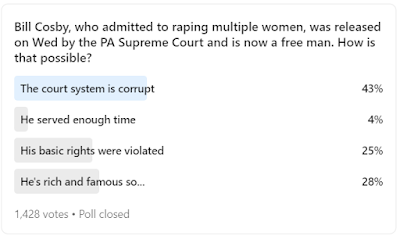 Muhammad Rasheed - Cosby didn't admit to drugging anyone without their consent. That's a lie. He admitted to offering the pills only. 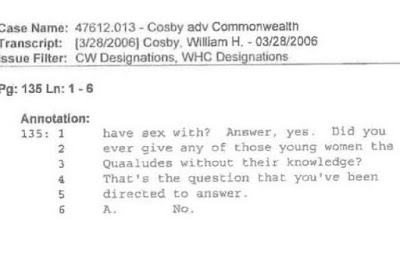 Muhammad Rasheed - He's clearly innocent based on the facts of the case.

Muhammad Rasheed - The facts of the case reveal that he's innocent of the charges against him. The problem here is that the public has been indoctrinated over the last few years using a relentless social media smear campaign into believing "pills = rape" in a way that benefits the grifting prosecution. Cosby didn't rape anyone and there is no evidence that he did. The case was a farce.

Jared Bradley, MBA - Clearly we are not going to agree on this but I respect your position.

Muhammad Rasheed - Wait, before you go there, tell me what evidence you are using to definitively decide that Cosby "admitted to raping multiple women," please. At least allow me the opportunity to scrutinize the material and decide whether I should change my position or not based on the strength of what you hold.

Throw down your rod.

Karl Wiese - @Muhammad... Respectfully stepping in here: You are correct that he did not admit to raping multiple women. However, case law has established that non-consensual sex with someone is rape. Unconscious or drugged women/men cannot give credible consent. Many women came forward and claimed (likely true based on the number) that they did not consent. What saved Cosby from additional charges was the statute of limitations, not innocence. There is guilt, and their is conviction. Many guilty people are never convicted of a crime.

Muhammad Rasheed - Karl wrote: “Respectfully stepping in here: You are correct that he did not admit to raping multiple women.”

That’s one way of putting it. What I actually said based on Cosby’s affidavit statement was that he didn't admit to drugging anyone without their consent. What you said would function as a strawman effigy logical fallacy. Forgive me, but it’s difficult to accept that as a demonstration of respect.

Karl wrote: “However, case law has established that non-consensual sex with someone is rape. Unconscious or drugged women/men cannot give credible consent.”

Irrelevant, since Cosby didn’t have non-consensual sex with Constand.

Karl wrote: “Many women came forward and claimed (likely true based on the number) that they did not consent."

The legions of women that Dolores Troiani’s team recruited for their long-con didn’t claim to have been raped. Their goal was to use their crying, shaky-voiced tales ("He creeped me out! I didn't know what to do! I felt the evil in my spirit!") to emotionally influence the court.

Also, your line “likely true based on the number” is a demonstration of the Appeal to the People logical fallacy. Like the strawman, it is also deceitful, manipulative and isn’t the tool of one who deals in respect. That’s two.

Karl wrote: “What saved Cosby from additional charges was the statute of limitations, not innocence.”

I disagree. Since Cosby was indeed innocent of the charges against him, the elaborate but sloppy grift schemes of his enemies crumbled like wet tissue at every court case before this one for that reason. This recent effort to FORCE a conviction using only lies and nonsense likewise fell apart precisely because he was innocent.

Karl wrote: “There is guilt, and their is conviction. Many guilty people are never convicted of a crime.”

Irrelevant in this case.
Jared Bradley, MBA - @Muhammad... I appreciate your loyalty to Bill, but the impression I am getting is you don't believe Cosby ever had ill intent or knowledge of what he was doing. Is that the case? I know one definition of innocent is being "free from legal guilt" aka not guilty, but innocent also carries with it definitions like:
- free from guilt or sin especially through lack of knowledge of evil
- harmless in effect or intention
- lacking or reflecting a lack of sophistication, guile, or self-consciousness : artless, ingenuous
You seriously want us to believe that Bill Cosby didn't know what would happen to those women if they took those drugs? After decades of seducing women, drugging them and taking them back to his room he didn't know he could take advantage of them?
This is obviously where we part ways. Yes, the cases against him have all failed due to lack of evidence and his guilty verdict was vacated (aka not guilty) due to his 5th Amendment rights being violated - I 100% agree with that happening because it's the law and his right to a fair trial - but that's a far cry from being harmless in effect or intention.
Muhammad Rasheed - Jared wrote: "You seriously want us to believe that Bill Cosby didn't know what would happen to those women if they took those drugs?"
This is another strawman effigy fallacy. That comment has nothing to do with anything I said about drug usage in this thread. You're the ones caught up in the false narrative that "Cosby drugged women like a monster" or whatever. My position on Cosby's drug usage is that he admitted offering drugs to women during the swinger's era when it was fashionable to do so, in the same way people offer alcohol to one another. That's all. He never gave anyone drugs against their will, without them knowing, or without them being fully aware of what the drugs would do when ingested. This narrative that smeared his name as the "date rape monster" is a fundamentally racist attack and shame on all of you for continuing to spread it.
Bill Cosby's only actual wrong doing is that he wasn't faithful to his wife and it left him vulnerable to grifting predators who target celebrities. That's all.
Jared Bradley, MBA - @Muhammad... wow. OK. If that's what you believe then more power to ya. LOTS of people would disagree, including me, but whatever. Have a great day.
Muhammad Rasheed - Jared wrote: "If that's what you believe"
That's what the facts reveal. All that matters is the truth.
Good day, Jared.
Karl Wiese - @Muhammad... You obviously know very little about the law or the justice system, but certainly entitled to your opinion.
Here Are All The Women Who Have Accused Bill Cosby Of Sexual Assault | BuzzFeed
Muhammad Rasheed - You obviously have interest-bearing stock in the Appeal to the People logical fallacy, hence your reluctance to let it go. I don't believe in usury myself, so I have no use for it.
Here's why you can't use your favorite fallacy to win an argument: 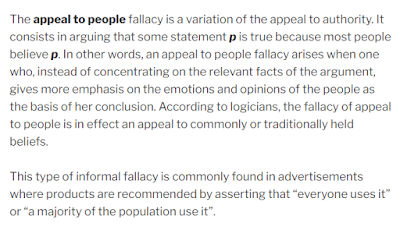