Close of the Canon 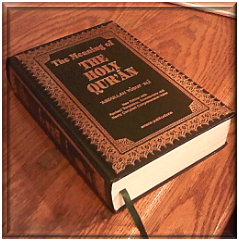 It's Muslim tradition to read 1/30 of the Qur'an every day of the thirty day fasting month of Ramadan. As is the nature of Sacred Scripture, I learn something new every time I read it no matter what age group I find myself.

The Qur'an is the human language translation of the final part of the Divine message to mankind, revealed to the unlettered Arabian prophet Muhammad ibn Abdullah (peace be upon him) about 1400 years ago. This book was designed to be recited allowed, per the translation of the word "Qur'an" (recitation), and it closes the canon on Sacred Scripture -- there will be no more Divine Revelation after it, and Muhammad is the final messenger of the One God of Abraham.

The content is composed of the One God talking directly to the prophet regarding what He commands him to tell us, often talking directly to the believing reader, talking directly to those disbelievers listening to the recited verses and those reading it for themselves, and to the People of the Book (the followers of Christ and the children of Israel). Like the previous books in the Divine message of God, the Qur'an also confirms & fulfills the previous scripture, as well as corrects those areas the previous guardians allowed their charges to go astray. For example, it confirms that the Christ Jesus, son of Mary was indeed sent by Him, and that the Nazarene messenger was created in his mother's womb by scratch without the seed of a male figure. But He also explains that Jesus was true to his mission and never, ever told the people to worship him as a deity... that the claims of "divine sonship" and "trinity" were but fictions invented by men.

The essence of the Qur'an's message is a warning to those who love performing evil, and a good news to those who love doing good. God commands all of mankind to believe and worship Him alone, perform good deeds, reject evil deeds, and repent when they mess up, as the high-level greater message, broken down into numerous community-building rules for how believers must conduct themselves among each other, and with the greater world community. The Qur'an is a mixture of very straightforward verses, along with allegorical ones to meditate on -- both types enable all peoples of all classes to understand what their Lord requires of them for prosperity in this world and the next.

The Qur'an has become controversial in the mainstream conversation since the tragedy of 11 Sep 2001, with Westerners desperate to know more about the mindset of the alleged terrorists that instigated the event. As THE source text of Al-Islam... the literal Word of Allah on earth... often Westerners who were desperate to find justification for what happened zeroed in on the book's co-called "war verses." The One God instructed the believers as to how to conduct themselves in all aspects of life, including during war.  Even though God's commands on that topic only limit the believer to a defensive position during battle/war:

"Say to the Unbelievers, if now they desist from Unbelief, their past would be forgiven them; but if they persist, the punishment of those before them is already a matter of warning for them. And fight them on until there is no more tumult or oppression, and there prevail justice and faith in Allah altogether and everywhere; but if they cease, verily Allah doth see all that they do." ~The Holy Qur'an 8:38-39

...many Westerners were unfortunately all too willing to believe that the very presence of the war topic in the Qur'an -- regardless of the actual context -- authorized the Muslim to indiscriminately kill any and everyone at will. This is far from the case, as an open-minded study from an objective mind will easily demonstrate.

I highly recommended the Qur'an for those with a sincere interest in Truth who, like the rich young ruler who inquired of the Christ, wish to know how they may be saved and in their Lord's favor so that they may achieve paradise.
Posted by M. Rasheed at 6:38 AM