Is it Good to Have a Businessman for POTUS? 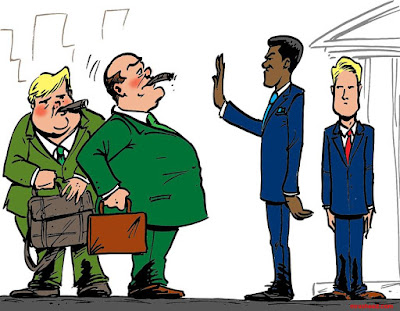 CITATION
Rasheed, Muhammad. "A Business Government." Cartoon. The Official Website of Cartoonist M. Rasheed 31 Jan 2017. Brush & ink w/Adobe Photoshop color.
Muhammad Rasheed - The free open markets destroy attempts to monopolize industry and discourage/prevent the stifling of the economic competition that enables capitalism to function. The only way for big companies to maintain their greedy stranglehold is if they can convince the government to partner with them and pass laws that make it impossible, or illegal, for smaller businesses to compete with them. So it's a good thing when the government actually does its job and refuses these partnerships, prevents companies from monopolizing industry, and prevents companies from merging into competition-stifling cartels. That's what the gov is SUPPOSED to do, as former President Obama did.

But you can't underestimate the power of greed on the world stage. As an ambitious, gluttonous corporate leader, getting the government to help you shut down the open markets in your favor is often the difference in USD between mere hundreds of thousands & millions versus billions & trillions. History has shown that people are willing to do literally anything at all, to whoever, when that kind of mega-wealth is at stake. So for over a century now (at least), we've witnessed politicians name their price and receive payouts from corporate interests in exchange for policies, laws and regulations that aid powerful, household-name conglomerates monopolize industries, and we've witnessed legions of former mega-corporate CEOs receive dubious high-ranking political positions in Washington D.C. 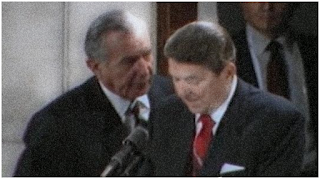 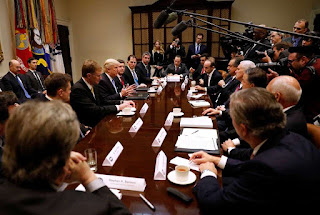 Both of these horrifying, and very unAmerican scenarios are responsible for our broken socio-economic systems that have caused so much pain and divisiveness among our citizens, and throughout our communities. Everyone knows that it's wrong for government officials to lie in bed with business interests this way, and even though the average citizen political layperson has been conditioned to dismiss it, and treat it like it's just normal business, the politicians themselves have still maintained a very cautious screen that they perform this dirt behind. In general, they rarely do such deals blatantly without at least some token effort to downplay the activity. They KNOW they aren't supposed to do it. Over the decades, corporate leaders have had to very carefully cultivate networks within government, and very slowly get their special interest agendas tweaked through the system, causing the corresponding slow economic destruction we've experienced along the way.

Despite this, people are somehow under the impression that if the politicians were out of the way altogether, that the corporatist leaders would be for the people if they sat directly in the US gov driver's seat. Even the corrupt politician would provide at least SOME effort at buffering the greed of their business partners, and only make incremental changes, but there is no way the businessman himself would ever provide such restraint were he to wield such power alone, without this middle man. Can you imagine? He would slash regulations designed to control corporate over-reach apart like a madman, whereas before he would at least be slowed down and forced to negotiate such changes. A selfish, wealth-hoarding swine under normal circumstances, if a raw businessman were the president, he would give up all pretense of pretending to care about the people. He would only be focused on himself and his direct peers; if he actually did something to help the little guy it would only be by accident. A greedy corporatist in the White House would be the worst idea EVER. He would not help the economy, he would only dramatically increase the wealth gap between the rich and poor which is his classes' normal modus operandi. How could it possibly be otherwise?
Posted by M. Rasheed at 8:58 AM