CITATION
Rasheed, Muhammad. "The Voice of My Enemy Through the Mouth of My Skinfolk Fake Friend." Cartoon. The Official Website of Cartoonist M. Rasheed 22 Nov 2020. Pen & ink w/Adobe Photoshop color.
Kobibornanew - Psychological reparations would help us more than monetary reparations ever could.
Muhammad Rasheed - All of our psychological issues come directly from domestic terror induced aritifical impoverishment. Massive infusions of cash is the very FIRST thing we need to overcome our psychological traumas.
Brannu Sunyata - So, basically what you’re saying, is there’s no psychological healing without an infusion of cash? So if capitalism collapses ... we don’t heal?
That sounds hella dependent. Not free.
Muhammad Rasheed - My ethnic group's specific trauma was caused by deliberate exploitation & plunder, preventing me from building wealth over generations and leaving #ADOS in an artificially impoverished state. You cure the root cause of my signature trauma with a Reparatory wealth redistribution.
The only person who would suggest that my theft-based trauma can be cured with non-wealth redistribution therapy/counselling—that does not address the artificially widening racial wealth gap—is an anti-#ADOS agent of white supremacy.
Brannu Sunyata - ... and if U.S. imperialism/capitalism collapses and there is no possibility of wealth redistribution, then what would the healing of your trauma from white supremacy look like?
... and if the wealth distribution you are begging for/demanding isn’t the amount you feel able to heal that trauma, then what?
Muhammad Rasheed - You're basically asking me "If a meteor strikes the earth and blows it up, THEN what?" That's the level of seriousness of your question.
Why bother to do anything at all then since there is always a possibility that the entire [fill-in-the-blank] could collapse?
Muhammad Rasheed - I'm not "begging" for anything. I'm unifying as a special interest group to use my political capital pressure my government to meet my demands in exchange for my vote.
"Begging" or "gibs" is a white supremacist slur in context.
Muhammad Rasheed - "Why bother trying to govern/misgovern yourself if the entire government could collapse?" 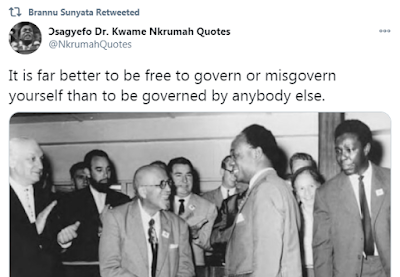