The Impenetrable Brick Wall of the Frontline Race Soldier 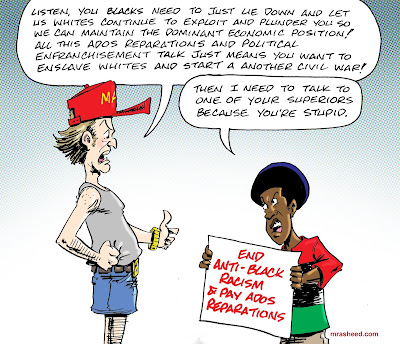 Magalee Ciripli - As a black American is it worth it to argue with racist white people or have you stopped expecting white people to respect or understand you?

Muhammad Rasheed - As an editorial cartoonist with an anti-racism focus, I use such arguments as the raw material to inspire my Gag-A-Day output. Within this self-imposed situation, I do find the necessarily contentious dialogues worth it, though they require the patience of Job that I sometimes find I am not able to match.

My challenge has been to break down my opponent’s coded language and spell out the meaning in the cartoon as blunt as possible so they cannot hide from it behind their own ironic version of political correctness. Largely successful, I believe the body of work will ultimately prove useful in helping move the progressive needle towards what right looks like.

Robert Hafetz - African Americans are the most racist people in America.

Muhammad Rasheed - “The most racist people in America” based on what exactly?

Robert Hafetz - Their preoccupation with it such as the question you just posted. Race has no inherent value. Its used incorrectly to mean culture. Culture has value race has no value and cant even be defined. We all evolved from the same tribe of African Sans Bushmen. You describe white people when there is no such thing. You have been indoctrinated to view the world through the filter of race. Democrats use race to manipulate people and turn them against each other. Race doesnt matter culture does.

Muhammad Rasheed - Robert wrote: “Their preoccupation with it such as the question you just posted.”

I’m preoccupied with it because the concept of “race” was created and weaponized to subjugate and exploit my people with for the last 400 yrs up into the present day. I can’t avoid to pretend this isn’t happening since to do so will only benefit the people inflicting this horror upon me.

It certainly holds no value to me. For me, within the USA, it is the functional equivalent of a prison inmate identification number. The value race holds is within a white supremacist system deliberately set up to benefit your favored group chosen along racial phenotype.

How do you know when you believe that it can’t be defined anyway?

Robert wrote: “Culture has value race has no value…”

“Race” holds value to the architects of the White Supremacist ideology and the anti-Black systemic racism for which it stands.

Robert wrote: “…and cant even be defined.”
In the United States of America, in which the American Descendants of Slavery (ADOS) have been targeted for subjugation, exploitation and plunder based on the combination of physical racial phenotype, and the cultural traits of their lineage and heritage traditions, “race” is defined thus and so. The oppressor race of the white racist aristocracy is likewise so defined and contrasted against along physical racial phenotype.

Robert wrote: “We all evolved from the same tribe of African Sans Bushmen.”

That has nothing at all to do with the race-based economic system that we deal with in the West.

Robert wrote: “You describe white people when there is no such thing.”

“White people” are the favored group of the white racist aristocracy who protect and maintain the White Supremacist Ideology and the anti-Black systemic racism for which it stands. “The white peoples of Europe” is what they have named themselves to mark them as members of the race-based socio-economic aristocracy they’ve created. I’m fascinated by your effort to hand all of this to me as if it was my invention. Trust me that I want nothing more than to rip it all down around your ears so I can be free.

Robert wrote: “You have been indoctrinated to view the world through the filter of race.”
Currently I’m fighting to end the concept by pushing for the dismantling of anti-Black systemic racism and the payout of Reparatory Justice to close the infamous racial wealth gap. When I’m finished, then we both can proudly close the door on the diabolical evils of “race” together.

Robert wrote: “Democrats use race to manipulate people and turn them against each other.”

Anti-Black systemic racism is definitely a bi-partisan effort and always has been. I will admit that the liberal side is deceptively more powerful in its usage than they pretend, especially in the modern day.

Well, as an abstract concept that has long been debunked as a physiological descriptor it doesn’t matter. But in an artificially created economic system when it’s used as an identifier to determine who is to be abused and who is to receive economic favor, it matters indeed.