Rules of the Righteous Fight 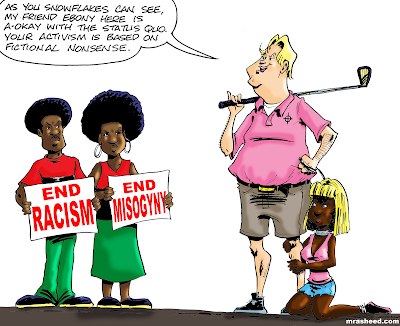 1.) HEADLINE: Fans Are Disappointed in Gabby Douglas For Her Response To Aly Raisman's Victim Blaming Tweet

WOMAN: "At one point Gabby Douglas was being criticized on an international scale for her 'bad hair' and 'attitude,' and SO MANY people supported her to drown out the silly critics. She knows how it feels, but here she is shaming Aly Raisman on sexual assault. It’s gross."

MAN: "My point is all men no matter what walk of life are going to meet a woman they want to bone at some point and express it poorly."

Muhammad Rasheed - The point is that predatory men should be held accountable for those poor decisions, and disciplined to not only discourage the behavior, but to keep the woman folk safe from the casual predator attitude that is entrenched in our culture from the patriarchal tradition. Unchecked it has morphed into a toxic rape culture that has got to go. There is no excuse for defending it on any level.

A lot of Black people are willingly assimilated into the white mainstream and 'coon' all the time. Does their decision to support the toxic racist culture somehow mean that that fight isn't worth battling by those who are awake to the problem?

We acknowledge the problem is entrenched within the fabric of the culture itself, and indoctrinates everyone because it is normalized. That's what being of the culture means. Pointing out that there are people still thoroughly indoctrinated in the toxicity of the culture -- both predator AND prey -- doesn't mean we shouldn't fight to stop it.

So when we point out the problem, and some people respond by pointing out that some members of the oppressed class aren't fighting against it ("Look! Ben Carson seems okay with the system the way it is! So what's the problem?! Racism is just all in your head!") it means you are defending the toxic culture on behalf of the oppressor class.


Misogyny, and the normalized rape culture is evil. It's the responsibility of the oppressor class that reaps the benefits from it to take the initiative to fix it. If they do NOT take the initiative to do so, because the benefits are too sweet & juicy for them to willingly give up that lifestyle they are used to, then the oppressed have the right to FIGHT for their freedom. You KNOW this already. Stand on the right side of history at every level.

"But look at that woman over there! Her actions show that she supports the rape culture, too!"

Did the treacherous and cowardly slaves who told massa about the planned uprising de-legitimize the righteous fight against slavery? Then why for what possible reason can you stand here trying to make the case that broken women who are indoctrinated from birth into our toxic patriarchy somehow de-legitimizes the righteous fight of equality for women? What possible point can you be trying to make that doesn't support the blanket accusation that all men are trash?

kreative_force - Ra what do we do with all the sister Ebony's of the world?

Muhammad Rasheed - What else? We cover them with love and wish them the best. Then leave them be, unless they need help. Then we cover them in love again.