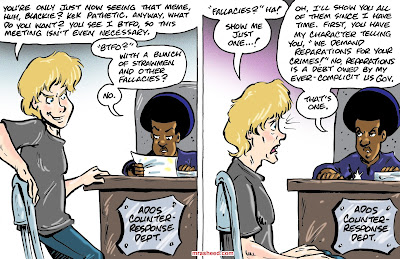 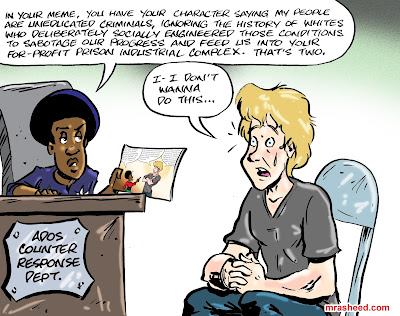 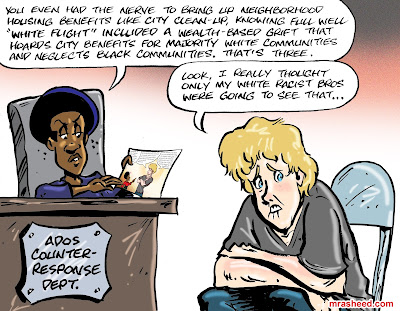 CITATION
Rasheed, Muhammad. "M. Rasheed versus 4chan [4 panels]." Cartoon. The Official Website of Cartoonist M. Rasheed 17 Oct 2021. Pen & ink w/Adobe Photoshop color.
ARTIST'S DESCRIPTION
These #MRasheedCartoons image panels were created as the counter-response to a cartoon a 4chan/pol white racist created in response to my early editorial cartoon back in May 2019. I stumbled upon it a couple weeks ago or so to my amusement and decided it deserved to be formally addressed. Better late than never, but it's not like the tired rhetoric the artist used has ever been updated by that lot anyway. The only way you'd know from looking at the toon that it wasn't made just yesterday is she has my character is wearing that old RGB tunic. I think the anonymous artist is a girl based on how she's reacting to the compliments. Note that she's using the white supremacist flag as her identifier.
*****************
webkilla - He even thought he could somehow own 4chan's /pol board with his walls of text - as if they in any way give two squirts of piss what he thinks, outside of ribbing on him for his absolute failure to meme. But hey, this guy is desperate for attention, so why not?
Muhammad Rasheed - The fact that they made that meme I'm addressing in the above panels and are the ones that got my original FB page deleted because they were so triggered over my original #WhenTheAliensCome cartoon (that they never shut up about) means that they absolutely give two squirts of piss about what I think, bud. lol But thanks for playing.