Advice From a Soggy-Bottomed Box

Muhammad Rasheed - From my POV as a Black American locked out of the competitive open free markets and denied my Reparations no matter who is in the White House, they are both the same.

Andrew Birch - Surely there are white liberal Americans who support your fight?

Muhammad Rasheed - Not. One.

Muhammad Rasheed - They are all grifters.

Andrew Birch - A technical point from one cartoonist to another - have you considered doing your ADOS cartoons in more than one frame? That way you can break up the big blocks of writing into something a bit snappier, and also have a punchline if you felt like it?

Muhammad Rasheed - Marianne deliberately tried to lowball us with an insultingly low amount for our Reparations, even after she met with the movement founders and economists who explained why her amount was way too low. That performance was fundamentally untrustworthy, and she was the best of them.

Muhammad Rasheed – Andrew  wrote: "have you considered doing your ADOS cartoons in more than one frame?"

Yes, and I do so when the flow of the message calls for it. Otherwise I don't mind the 'big blocks of writing' at all, since I'm not constrained by strict newspaper layout requirements or anything similar that would pressure me to adhere to now archaic traditions. 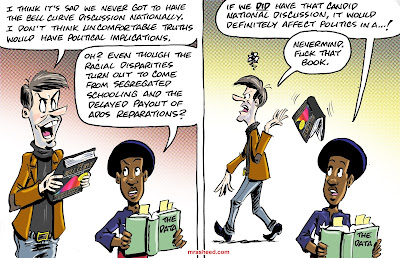 Muhammad Rasheed - lol Obviously I'm not married to the punchline as a must have. If it flows in then it's in.

Andrew Birch - I’ve had several strips running, but I always had a set space to fill. You’re obviously not limited in that respect. Does your work only appear online?

Andrew Birch - I like the way you used an actual image of the book cover and slipped it into the cartoon. Was that very tricky? I’m a lot older than you and not very technical.

Muhammad Rasheed - Andrew  wrote: "I’ve had several strips running, but I always had a set space to fill."

Yes, back in art school they showed us different industry standard working templates that each type of cartooning form used.

Andrew wrote: "You’re obviously not limited in that respect."

Andrew wrote: "Does your work only appear online?"

Yes, I upload it to my website and share it around to my various social media. There's an online ADOS-focused political magazine I gave permission to use the ones they like. But over all, the freedom and unlimited image area online publishing gives me reminds me of the original golden age of the newspaper comic strip, when the cartoonists had a whole page to do whatever they wanted to do. That kind of freedom to just spread my wings and flex however way I wish is intoxicating. I have zero reason to voluntarily confine the way I work to any particular industry's formatting style unless I just want to in order to mimic an effect.

Muhammad Rasheed - Andrew  wrote: "I like the way you used an actual image of the book cover and slipped it into the cartoon. Was that very tricky?"

No, it's not tricky. In fact, the photoshop program makes the entire clean-up, coloring aspect of cartooning so easy, it's now just a part of the drawing, even though I still draw and ink with traditional tools. When I first started, I still had to do clean up with Pro-White and a brush, and stuff like that, but now once the ink dries and I erase the pencil, I scan the drawing in and adjust it to make the blacks black and the whites white, fix any typos, clean up any inking spills, and then add color and special effects (like the bell curve cover) and have it ready for upload all in less than half an hour. No problem. It definitely adds to cartooning way more than the old way of doing it.

Andrew wrote: "I’m a lot older than you and not very technical."

You don't look that much older in your profile pic. I just turned 50 yrs old this month.

Andrew Birch - You look a lot younger in your photo! Must be due to clean living.

Muhammad Rasheed - lol I think I was 38 in this FB profile photo. My new face is greyer.